This man will cheat on you because he is bored in serious relationships.

If you’re in a long-term relationship with him and you’re not having as much fun as before, he’ll look elsewhere.

He just needs to feel alive or else he’ll think he’s wasting his life. You may catch him flirting with women because he has a hard time being discreet.

Once his intentions are revealed, he won’t even try to justify himself; he’ll just admit he needed a little more adrenaline.

Ciao, Aries, we won’t miss you at all!

Taurus is a sign that never deceives. He is faithful, but to a certain extent. He won’t cheat if he doesn’t stand a chance.

If things aren’t going well between the two of you, he’ll find someone else to have fun with.

He is only unfaithful when he is unhappy in a relationship.

He doesn’t have enough strength to let you go, but he wants you to feel what he is feeling.

All he wants is to have true love and someone he can count on.

But if he realizes that your love isn’t the same as it was when you started your relationship, he’ll start looking the other way.

Eventually, he’ll find someone to connect with right away, both physically and emotionally.

And when that happens, he’ll leave you telling you there’s nothing you can do to keep him.

This sign is a pathological flirt. And you know what happens when a man is looking after someone all the time.

Sooner or later something will happen with all the flirtation and all the compliments.

He is someone who will cheat on you with people you are close to, but he is very bad at hiding it.

So, you’ll probably find out before he even establishes some sort of outward relationship.

When he is cheating he cannot hide it and you will easily find out that something is going on because of his behavior.

He will smile often, not have the typical Gemini mood swings, and will have a consistently positive outlook on life.

He will never admit that he cheated on you unless you catch him in the act.

And even if he tries to say how sorry he is, don’t turn back to him because he will only start over.

As is known, this is one of the most sensitive zodiac signs, so it is not as likely to be unfaithful.

Something huge has to happen for a Cancer to cheat on you.

He needs to catch you with another man and feel bad enough to do the same.

He will only cheat you if you cheat on him. Otherwise, he would never have thought of it.

He’s fairly loyal and only if he feels threatened and bad because of you, will he behave the same way.

His problem is that he attaches himself easily and when he falls in love with someone he gets clingy.

This is the main reason why his partners cheated on him

Most Cancer men are good-looking and kind, so it is very easy for them to find another partner after their current relationship is broken.

The King of the Jungle will only cheat on you if he doesn’t feel good enough in a relationship.

If he sees that the relationship isn’t what it was before, he’ll move on.

The catch is, he wants everything to be with the same sparkle it started with and if you can’t deliver that to him, he’ll start looking elsewhere.

It is very easy for a Leo to find someone else because of their charm and intelligence which makes them irresistible.

He’ll be fairly honest with you and won’t do anything until he tells you it’s over.

He can flirt and play innocent games with other girls, but he’ll never sleep with them if he’s in a relationship.

Even if you tell him that you will work on your relationship and make it better, he will ignore you and start looking for someone who can provide him with the adrenaline rush he craves.

For most Virgos, cheating is hardly ever an option.

They think hiding messages and sneaking out of the house to see a mistress is a pain, so he would hardly do something like that.

Only if you hurt him so much and cheat on him will he go and find someone for a one-night stand.

And the s’ he gets won’t mean anything to him, but he will feel better knowing that he did the same to you.

His biggest fear is that his partner will cheat on him, so that he does not tolerate any deep relationship between his partner and acquaintances.

When he falls in love he believes it is for life and he respects and cares for his partner as if she is the only person in the world.

So, if you are dating a Virgo or are married to them, there is nothing to worry about.

I’m not saying you should relax completely, but at least you know infidelity isn’t in her nature.

We know that a Libra never cheats if he doesn’t have a sufficient reason to do so.

If you don’t care about him, he will surely give you back the change in your coin.

All he wants is a happy, healthy relationship, so as long as you can offer him that, he’s not going anywhere.

But if you start to take him for granted, he’ll definitely show you that you can’t laugh at him.

This sign is the sign of the husband, so if you want a healthy, long-term relationship you don’t need to look any further than Libra.

He will give you everything you need physically and mentally, and will always be honest about everything.

So, in short, if you treat your Libra well, they will treat you even better. Now it’s all up to you.

Scorpios like to have fun, so it’s not uncommon for that fun to turn out to be more than that.

He is always surrounded by beautiful women and his partners are known to be jealous all the time.

This is no wonder, as it tends to charm all the women who pass by by telling them how beautiful they are.

He has a lot of female friends and some of those friendships often turn into s’ friends.

So if you are dating a Scorpio be careful because you never know what can happen if you are not careful with them.

He always puts himself in the foreground and the most important thing for him is to have fun because, as they say: we only have one life, so we have to live it fully.

If I were you I would be very careful with a Scorpio man because sooner or later he will have enough of you and look for someone else.

Whether you can take it or not is up to you.

He just can’t resist when a woman smiles or winks at him.

If this happens at a bar, you can expect him to order the most expensive bottle of wine and send it to his table.

He is always gallant and he doesn’t care how much something costs if it makes him happy.

As he likes to have fun and have a good time with his friends, he has many opportunities to meet a lot of women.

He doesn’t mind sleeping with another woman every night and then coming home and doing the same.

He is also an accomplished liar, so he will easily convince you that he is loyal and that he only loves you.

He can handle well, using the fact that you like him very much.

If I were you, I would be very careful with him because he can live with you and another woman, without you suspecting anything.

So you better be careful because you are dealing with sneaky liars here.

This sign just doesn’t like infidelity. He would rather break up with you if he isn’t feeling good in a relationship, but he would rarely cheat.

He doesn’t see the point in cheating and he thinks it can only bring more stress to his life.

If things aren’t the same between the two of you and you think you won’t make it, you can expect your Capricorn to tell you that the two of you should go their separate ways.

To be honest, he won’t need a lot of time to find someone else since he’s charming and fun.

He will never try to find a solution if he sees that things are not going well.

So if you have a Capricorn in your life, you can bet that they’ll be loyal to you and not have squinty eyes.

Instead of focusing on other people, he will focus on you and do whatever he can to make you happy.

The problem with Aquarius is that they often cross the line.

He flirts and has fun with random girls, thinking his partner won’t mind. But if he was in their shoes, it would bother him.

He doesn’t want to be unfaithful, but if the opportunity presents itself, he will because it is having fun and feeling good that he feels alive.

An Aquarius man is a great hedonist and if he gets the chance to enjoy the moment, he will, without thinking about the consequences.

And in most cases, the consequences are severe enough to break the strongest of relationships.

The problem is, he needs a woman who will set rules that he will have to follow if he wants to be with her.

This is the only way for him to calm his tendency to look elsewhere and his inconstancy.

It is one of the most loyal and steadfast astrological signs.

If you are lucky enough to have him as a partner, know that he can turn your life into the most beautiful love story.

But if you do something that might piss her off, be careful because you don’t want to be hit with her.

He always gives himself completely to the loved one and if that person takes advantage of him, he can show you what it is like to play with fire.

Usually, Pisces are loyal as a person and just want to develop a healthy relationship with their soul mate.

So if you can provide him with that, he will be yours forever.

Just be smart and you’ll always have someone to count on.

It’s all up to you and we hope you get there with Pisces because they are so worth it. 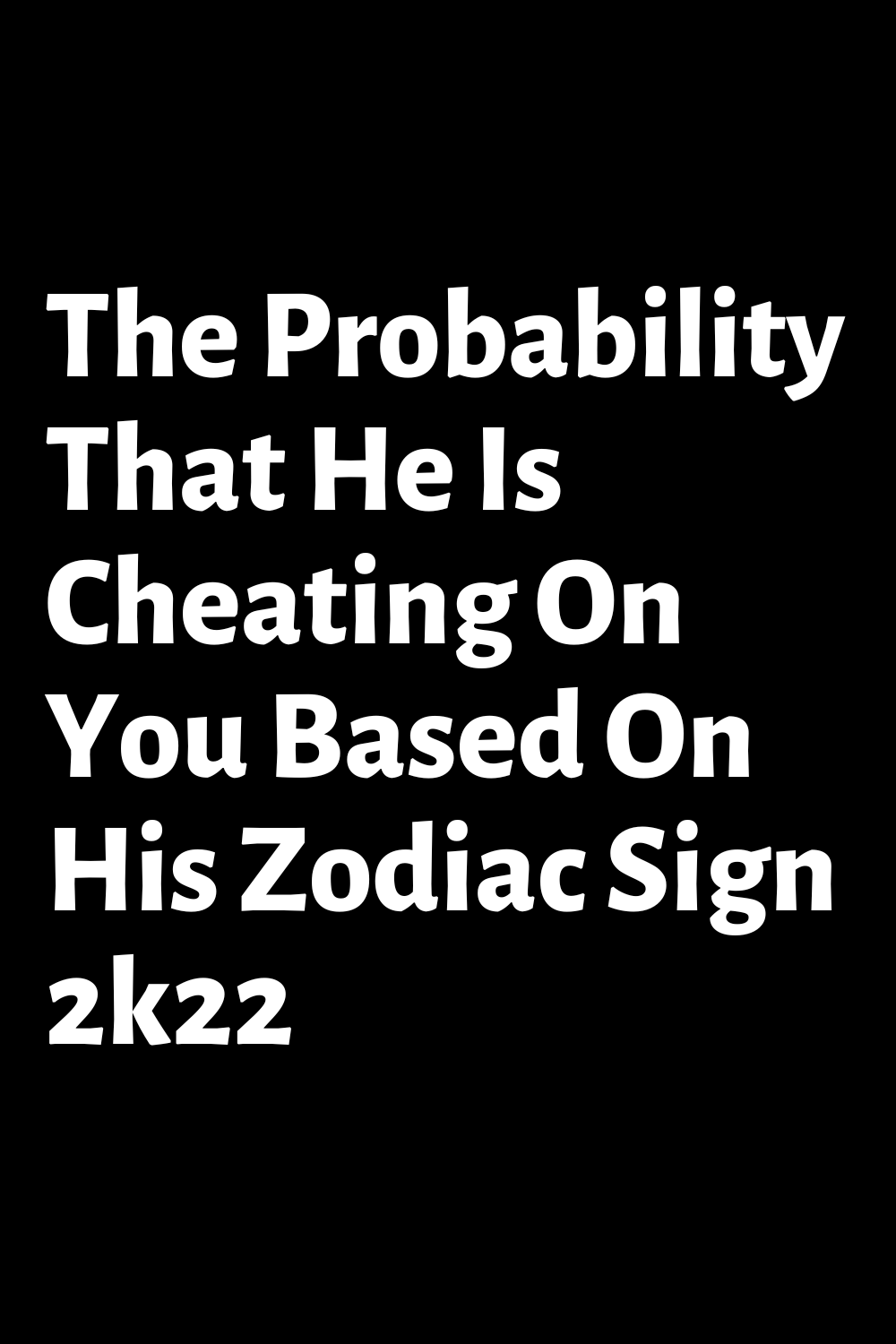