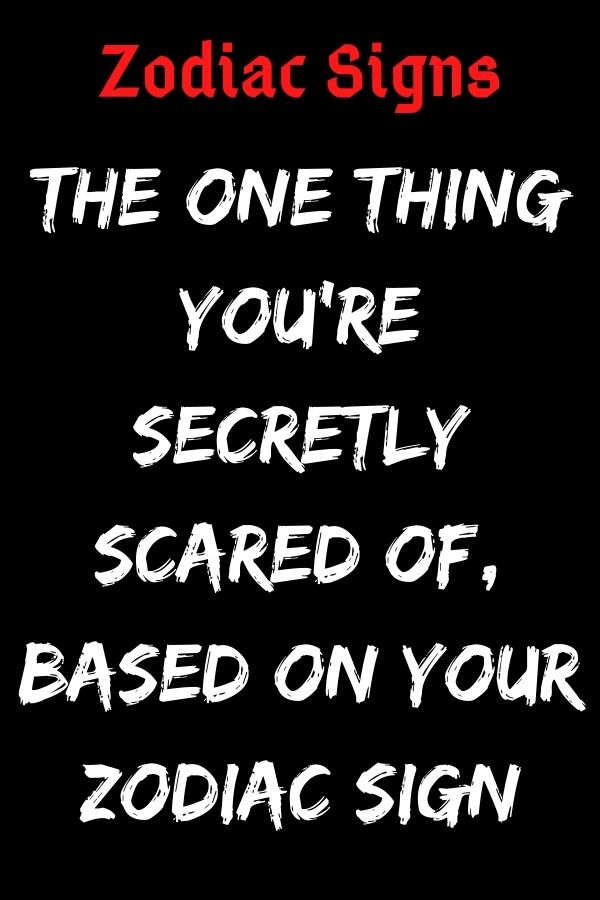 Abandonment. The reason why you don’t want to tie down is that you’re scared someone you trust will turn your back on you and leave you.

A broken heart is not something you deal with particular well, which is surprising because you handle almost everything that comes your way.

You might not even be aware of the fear you have, but it’s most definitely the reason why you’re the first to break up and run away as soon as you smell trouble.

Change. You are a person who loves to have everything planned out.

You like to know what’s coming so you can prepare yourself for any possible situation.

You’re used to holding the reins on it all, but when things slip from your control, you get lost. And that is your biggest fear.

Inadequacy. You’re the king of overthinking. You can turn every problem into an even bigger one just by letting your mind run wild.

The biggest problem for this happening is you.

Whatever challenge you face, you start with the thought that you’re not good enough.

Basically, you sabotage yourself before you even begin. That poisonous thought is what pulls you down from success.

Powerlessness. Usually, your emotions get the best of you, which renders you powerless.

Things start happening that are out of your control. And no matter how hard you try to take it back, your emotions don’t let you.

This lack of control is driving you crazy, but you can’t help it since your emotional side has always been so much stronger than your rational one.

You have it all together, you’re the star of the show, the first in line. This situation right here is what you want and where you’re happy.

But what the future brings is unknown and you’re terrified of that.

You’re scared stiff at the possibility that everything you have right now may vanish into thin air.

On the one hand, you’re miserable because you’re alone, but on the other, you can’t be with anybody because you’re unable to relax and open up to that person.

It’s difficult for you to be vulnerable and honest with anyone.

That closeness is what scares you the most and, ironically, what you lack the most.

When you think about it, you’re sabotaging your own happiness.

Socializing. Some would say that this is absolutely not true because Libras are extremely social and friendly.

It’s true, you can be friends with anyone; it’s no problem for you. But what scares you the most is failing to make someone like you.

You’re scared of socializing if it goes bad.

I mean, you’re an adorable human being and there is nothing not to like about you, but there will be an occasional hater that won’t like your perky personality and that’s okay.

Heartache. No one would ever guess this secret fear, right? You look so fierce and fearless from the outside.

You look like nothing can hurt or touch you, but actually what a lot of people don’t know is that you’re incredibly emotional and fragile.

When you fall in love, you want it to be real, true love and you act like that.

Everything you have, you put into the relationship, so naturally, heartache is the thing you’re scared of most.

Judgment. It’s very important to you that people think the best of you.

You don’t want to make the wrong move in front of anyone because that would lead to judgment.

That’s something you’re most afraid of.

That’s why you sometimes might appear cold and distant from people – but only because you don’t want to say or do something wrong and give them material to judge you.

Failure. Well, this one is not such a shocker. Everyone knows that you’re a hardworking and persistent person.

Nothing and no one can stop you from making your dreams come true and fulfilling your goals.

Since you’re that good in your success rate, the biggest fear is failure.

Imagine the inability to complete something you started. Oh, the horror!

This is the reason why you’re always single.

Also, it’s hard to explain that sometimes too rational mind of yours, so that not everyone will reject you when they’ve dealt with you.

One thing’s for certain – you’re freakishly afraid of rejection.

Commitment. You are deeply in touch with your emotional side.

Spiritualism is very important to you and, basically, you don’t value anything material.

You’d be happiest if you had someone to love you, but exactly how you want to be loved.

That’s your biggest fault. You don’t want to be tied down if things don’t go your way.

Well, sadly, you can’t instruct someone on how to love you. You’re not living in a world you created all by yourself.

You’re here with everyone else, so respect that and open your horizons a little more.