Desires come and go, everything depends on the experiences we are living in each moment of our lives. It is important to have desires in this life because in part it is what motivates us to follow every day. Dreams can be influenced by our experiences, but deep down everyone has always had a hidden desire that has never been fulfilled. If you want to know what is the most hidden desire you have according to your zodiac sign, keep reading, you will surely be surprised …

Aries is a very determined person, believes he can achieve anything and the truth is that he is right. When you think something in your head, it doesn’t stop until you get it. He refuses to allow others to stop him and tell him what he has to do or stop doing. He won’t let anyone get in his way. He is a very intelligent person and knows perfectly what he has to do to make his dreams come true. His most hidden desire is that all his efforts be recognized with success.

Taurus is a person who likes to build his life on a solid foundation. He needs all aspects of his life to have a minimum of security, he does not like to play with important things so he will not put anything at risk, he has struggled a lot to get where he has come so if he has to make an important decision he will think more than twice. Taurus’ most hidden desire is to have everything under control, a priori, it seems to give more importance to other things. But he is a person who prefers to know what will happen in each moment to take advantage of the moment and take it to his land.

Gemini is a person who is full of energy and emotion. He is always looking for his next adventure and he does not imagine living in a constant routine. He knows that he has to live in it because he has no other left, but whenever he can he will give life a little joy by proposing some crazy adventure of his own. He loves having new experiences and meeting people who bring positive things. If he had to stop at some point, his whole life would fall apart, that is why Gemini’s most hidden desire is that his crazy adventures never come to an end.

Cancer is the most sensitive and compassionate person you can find in this world. He will always be the first person to react when something bad happens to you. What he wants is for people who are important to him/her to be happy and will do everything in their power to get it. It is very difficult for him to control his emotions and that is why he is sometimes judged by others. This makes Cancer’s most hidden desire to be totally free, he wants to express all his emotions without fear that everyone will point his finger at him.

Most people think that all Leo’s wishes are related to feeding his entire ego, that is, everything that has to do with his power, success, money and the truth is that everyone is confused. Leo’s most hidden desire is to give affection to all the special people around him and of course, that this act is reciprocal. Its interior is a soft and affectionate person who only wants to feel appreciated by those around him for everything he does.

Virgo is very perfectionist and that is no surprise, but its interior has many things to offer. Not only is that person cold and serious that he appears to be, inside he has his sensitive side already authentic. In fact, his most hidden desire is to find true love. He is a person who is looking forward to finding that person with whom he can share his whole life. He is looking forward to finding his soulmate so he can be himself/herself without any fear. Of course, it will not open with anyone, Virgo needs to see that the other person shows a minimum of interest because when he/she falls in love gives everything and commits to the end.

Libra spends his whole life bringing harmony, balance, and unity to the lives of others. He works very hard because he knows that the world deserves something better than what society is offering. Libra’s most hidden desire is to live in peace, he is always complaining that his life is very monotonous, but in reality that gives him very great peace of mind. Actually, Libra is grateful for everything that comes to him because he knows that life is a gift and you don’t have to be hitting it, it is best to accept things and adapt to them.

Scorpio is a very ambitious person and that can get him into trouble, but the truth is that there is nothing else that drives him in life than to prove that everyone around him is wrong. He is a very stubborn person and will do everything he has to do to prove that he/she is always right. The most hidden desire of Scorpio is to make the impossible possible, it is a person who is not satisfied with the first change. He will do everything he has to do to make his dreams come true and he will not stop until he has in his hands everything he has always dreamed of.

Sagittarius is known for his adventurous nature, he is always trying to perform activities that make him live new experiences. What most people do not know is that their most hidden desire is not to live a constant adventure but to change the world and leave a mark. He is a person who does not lack motivation, is very intelligent and wants everyone to remember his exploits. That is why he is constantly leaving his comfort zone. He is not afraid to innovate and look for new ways of living, new ways to stand out for the rest of the centuries.

Capricorn is a very hardworking person who is always eager to succeed in life, has the reputation of abandoning everything he has and focusing only on his work, but he is not as selfish as he seems. The most hidden desire of Capricorn is that his relatives do not lack anything, that is, the people he loves most in this world. That’s why he doesn’t stop working hard, he needs to see his loved ones happy and if he has to work 24 hours a day he will.

Aquarius hates the idea of ​​following others, he is an independent person who has always been at his leisure. He can’t stand following the crowd, he prefers to be hated for being himself/herself to be loved for pretending to be someone he is not. The most hidden desire of Aquarius is to stand out among others, sometimes he becomes so obsessed with it that he forgets his feelings and emotions. That can have serious consequences, but it is something that does not matter because Aquarius has always lived as he pleased and will continue to do so.

Pisces always has its head on the worlds of yupi, it is a person who spends most of his time dreaming that their lives are perfect, in doing so he does not realize that he is living in a reality parallel to that of the rest of the world. Pisces’ most hidden desire is to be able to carry out his dreams without others judging him for it. He knows that today’s society is not prepared for all the ideas he has in his head and is afraid of being treated like a freak. 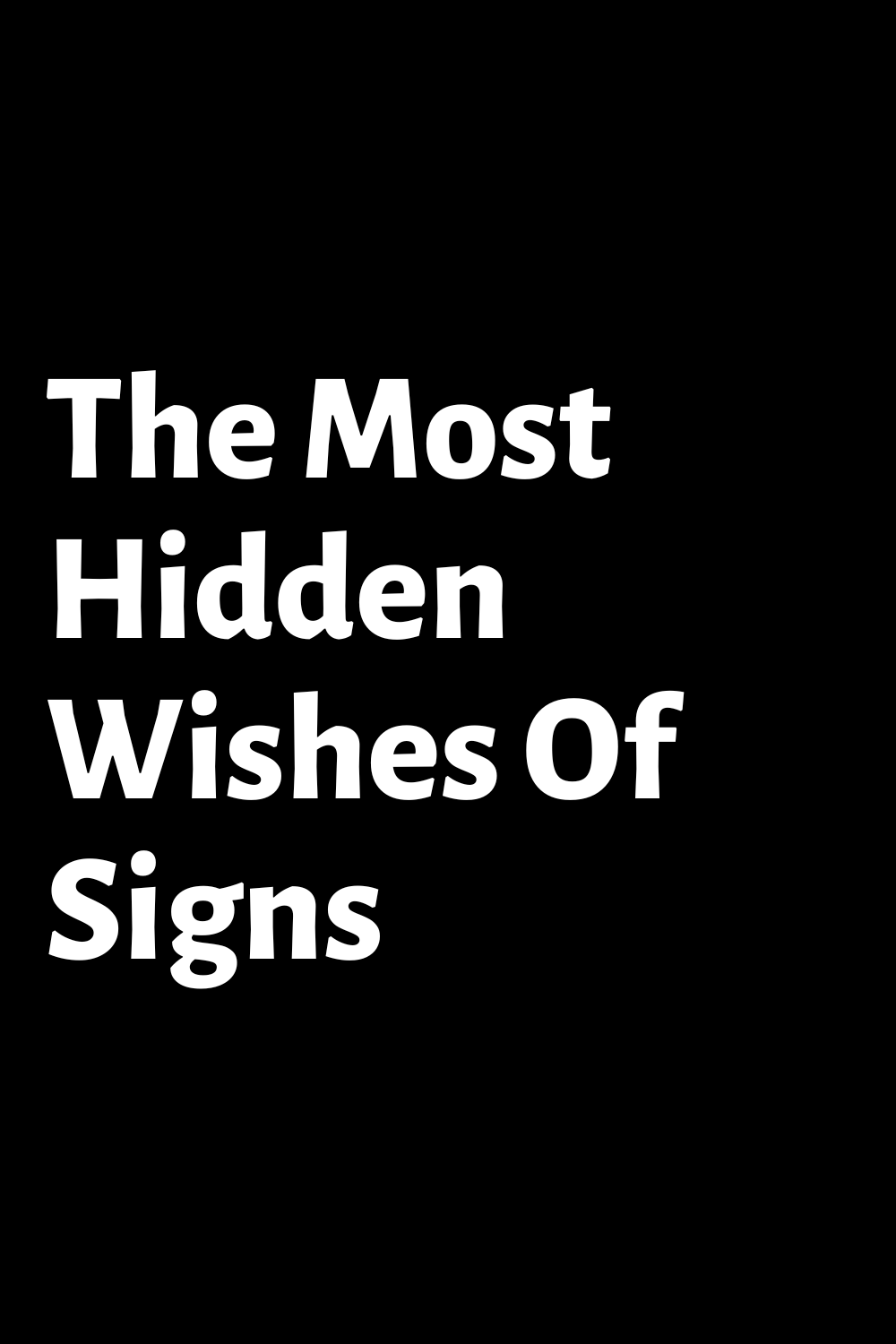 FIND OUT HOW RESOURCEFUL YOU ARE BASED ON YOUR ZODIAC SIGN

The fate of your relationship. 6 pairs of zodiac signs and their destiny in 2022

THE MOST ANXIOUS PEOPLE ARE CANCERIANS: IF YOU FIND THEM, HOLD THEM TIGHT, THEY NEED THEM.

FIND OUT HOW EACH ZODIAC SIGN BEHAVES WHEN THEY GET ANGRY