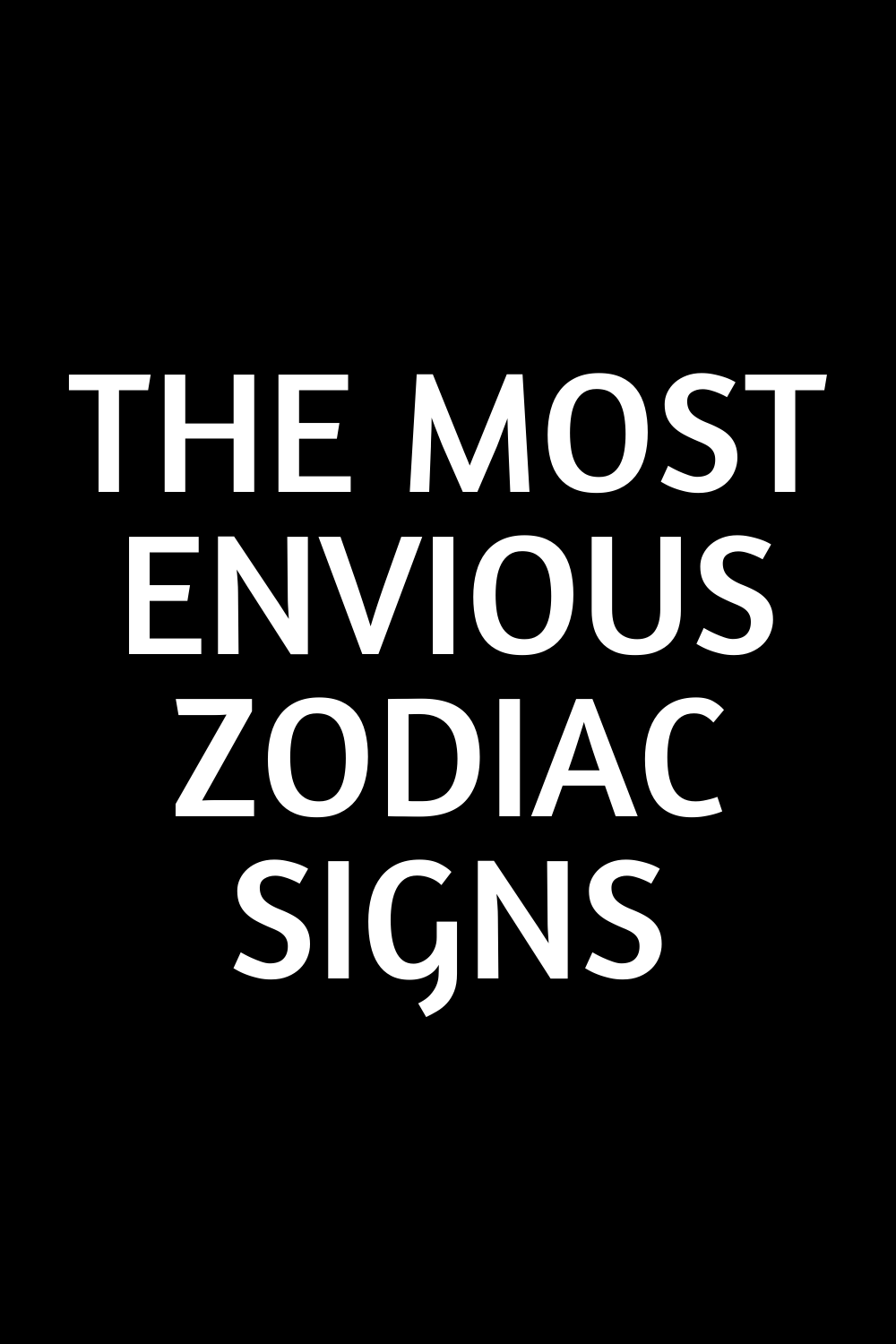 THE MOST ENVIOUS ZODIAC SIGNS

Find out which are the most envious zodiac signs and which, on the other hand, are not nearly at all.

Envy is a feeling that is difficult to manage and even to recognize and accept. Everyone, sooner or later, finds themselves experiencing it, and experiencing its effects is not at all pleasant. Whether it’s a better grade, beauty, the latest fashion smartphone, or successes in life, everyone finds themselves envied and envious. And if in the second case, it can even please you, in the second you feel somehow defeated, troubled, and decidedly negative.

Fortunately, envy is a feeling that if treated well can help you get to know yourself better and even become better people. It all depends on how you choose to live it and how much importance you give to what others do. Staying focused on yourself and taking others as an example is the best way to deal with envy. Unfortunately, however, not everyone succeeds, and in some cases, this feeling can become so prevalent that it hurts those who feel it. Since envy certainly depends on the perception that one has of oneself but also on the influence of the stars, today after seeing how confused the signs of the zodiac are in love and which are the zodiac signs that struggle to apologize, we will find out which signs of the zodiac are among the most envious and which ones, on the other hand, do not experience envy as something negative.

This is how the signs of the zodiac live envy

Aries – Envious only to give the best
Those born under the sign of Aries tend to observe others only in their spare time. And, when they do, they have a special focus on differences and how to learn new ways to improve and move forward. Although in the eyes of others, at times, they may appear envious, what they feel most often is the spirit of competition that drives them to notice what others do better than them and everything to perfect themselves and teach them to overcome them. They are therefore highly competitive people and always fighting with themselves and with anyone they consider a rival. For envy as an end in itself, however, they do not have much time because they are too focused on themselves to grasp the successes of others who have little interest in their way of being.

Taurus – Rather envious
Well yes. As calm and poised as they may appear, the natives of Taurus are downright envious. Even if they are not among the signs of the zodiac obsessed with this feeling, they are still able to live it in great measure. This depends on their need to always have everything they need. Which leads them to be competitive on the one hand but also attentive to the actions (and above all to the successes) of others. A way of doing that can sometimes create confusion in those who frequent them because it will always be difficult to predict their reaction in this sense. If at times they can show genuine happiness for others, others can be limited to simple envy while still others can even come to harbor anger.

Gemini – Highly envious but in a positive way
Those born under the sign of Gemini have a rather instinctive and often irrational way of life. This leads them to harbor feelings of envy that they cannot always control. When this happens, they end up feeling defective and experiencing emotions they don’t like. Fortunately, the reactive and positive part of them means that in most cases, their envy turns into something positive and able to encourage them to give more. This means that while recognizing the successes of others to the point of envying them, they manage to grasp the ways and the winning points, trying to do them to improve themselves. A way of doing things that leads them most of the time to take steps forward in their life. Which makes them less and less envious.

Cancer – Subconsciously Envious Cancer
natives do not like negative emotions and this prompts them to try to deviate from them as much as they can. In reality, however, they too feel envy like everyone else and when this occurs, their effort not to recognize it leads them to experience it in an unconscious and often painful way. It is a passage that they do not know how to manage and that hurts them deeply, leading them to close in on themselves and to live badly every single emotion felt about it. It will be only by learning to know each other better and to accept even the parts of the shadow that they will be able to count on positive and therefore constructive envy and able, therefore, to improve them.

Leo – Not very envious
Those born under the sign of Leo are not people who live off envy because their being constantly in competition with others pushes them to look at who does best to try to overcome it as soon as possible. These are people who, when it comes to envy, yearn to be on the other side, that is, on the side of those who are envied. For them, envy is the measure of the success of others. Therefore, even trying it, they would never even admit it to themselves. A real shame because doing so could give them a different view of things, prompting them to improve even what they deem perfect and at the same time making them more empathetic towards others.

Virgo – Quite envious
Those born under the sign of Virgo harbor a form of defeatist envy. In life, they love to be on the side of those who are envied and when it is their turn to do so they somehow feel the weight of defeat. Rationals as never before tend to always question themselves about what they feel and when they believe that someone is better than them in something they take it to death both with those who dare to overcome them and with themselves. It is a mix of negative emotions that generally live inside and that leads them to be defeatists. Certainly, when they envy they cannot live it constructively and this leads them to give themselves more than they should when trying to improve themselves and reach those they envy could instead help them to live the whole situation better.

Libra – Almost not at all envious
Those born under the sign of Libra are among the least envious signs of the zodiac. Their way of understanding life, the constant search for beauty, and the moderation they put into everything they do lead them to see positively those who achieve important goals. Of course, it can happen that, like everyone, they find themselves envying those who arrive where they cannot but, immediately afterward, they transform their envy into the awareness that perhaps they too, by making an effort, can succeed. This way of doing, therefore, pushes them to improve themselves every day and to cultivate positive and never frustrating emotions. This is also due to the awareness they have of themselves to the deep self-esteem they enjoy that leads them to be constantly present and aware of strengths and weaknesses on which it is still important to work.

Scorpio – Little envious but very competitive
The natives of Scorpio are not exactly among the most envious people of the zodiac because when they find themselves experiencing this feeling, they end up immediately putting themselves in the game, eager to improve themselves to reach and overcome those who dared to advance before them. It is a form of constructive competitiveness that makes them active and willing and that helps them not to give in to negative emotions that, otherwise, would risk overwhelming them. Well aware of their limits but also of their potential, they tend rather study those who have overcome them in something to understand if and how to fight. A way of doing things that helps them improve day by day and continually challenge their successes since, first of all, they are competitive with themselves.

Sagittarius – Quite envious
Those born under the sign of Sagittarius have a great need to look good in the eyes of others. This leads them to envy anyone who achieves this sooner or better than them. It is often negative envy because to overcome the person towards whom they feel envy they will try to belittle it to no longer have it in their path as a rival. This way of doing, of course, often makes them angry with themselves and with the world, preventing them from growing as they could if they embraced a more peaceful way of dealing with things and if they understood that there is room for everyone in the world.

Capricorn – Envious
Even if in life they prefer to always show themselves superior, those born under the sign of Capricorn are people who feel a lot of envy when someone achieves goals they cannot reach. Even if this does not lead them to become angry, they experience a sense of profound defeat within themselves and this leads them to darken and ruin the quality of their life. Thankfully, they occasionally manage to pull themselves out of this vicious circle by starting to do something for themselves and moving to achieve what they yearn for. Realizing that looking at others is fine but that first of all it is important to always remember the path traveled, it could be a good way to experience envy exclusively in a constructive way and not to experience negative emotions and therefore difficult to manage.

Aquarius – Not at all envious
Those born under the sign of Aquarius are not envious at all. This is because they never care about others but prefer to focus on their own life. Having a different way of seeing things from the common one also makes them ambitious about goals that others do not aim for. For this reason, it is highly unlikely that they will experience envy. On the rare occasions when this happens, they prefer to distance themselves from the envied person so as not to have to worry about it anymore and go back to thinking only about themselves. A way of doing things that can also work but that would make difficult, if not impossible, any competitions that may sooner or later arise in life. For this reason, trying to manage envy too could be a constructive experience for them.

Pisces – Unenvious
Pisces natives are unenvious people because they are usually happy with the successes of others. This depends on the awareness that no one can take anything away from them and that their life path is strictly personal. When they find themselves competing for something they transform any envy for the qualities of others into a desire for competition. Something that they manage to manage and that leads them most of the time to improve themselves and achieve goals that without this way of doing they could never even have imagined. They are therefore signs capable of adapting to the context, making it successful based on what they find in their path.