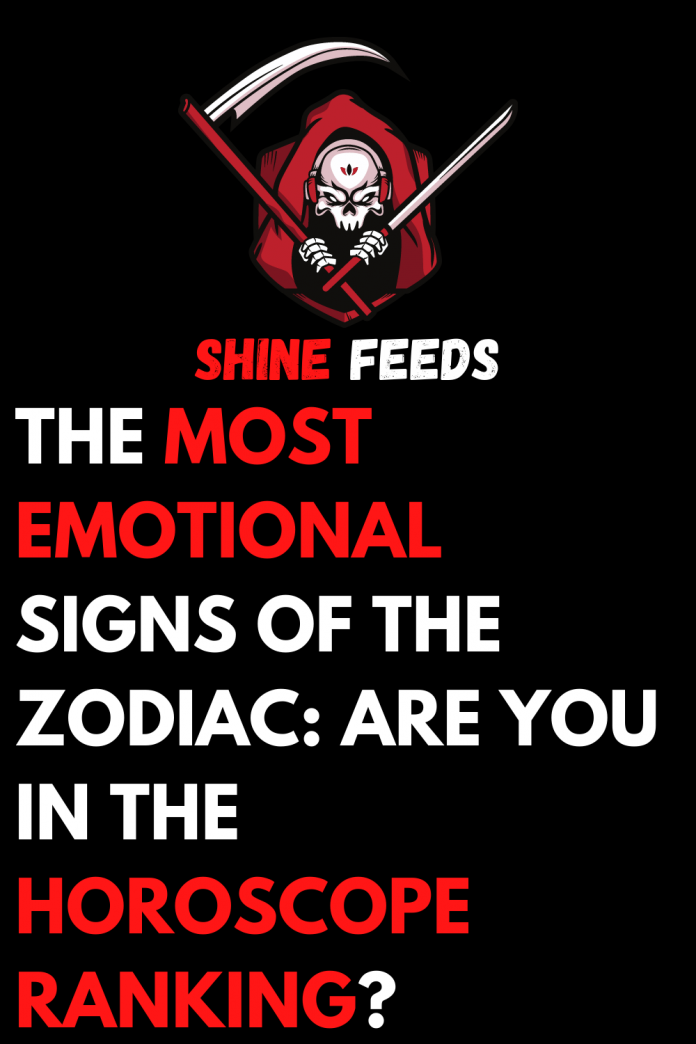 No, no, immediately push back the tears: you cannot be moved also because you are in the ranking of the most emotional signs of the zodiac, come on!

Maybe you are not even in the first place of this ranking and, therefore, being moved would be useless.
No, it does not matter that you have already rolled up in your blanket with sleeves, have prepared their handkerchiefs and you’re ready to receive the news.

You’re not going to be that emotional compared to a simple horoscope ranking, are you?
If you have reacted exaggerated even to the possibility that you can be one of the signs that can try the emotions more strong in the zodiac, you’ll want to skip this ranking. Better take a few deep breaths and relax.
Everyone else, on the other hand, can check which are the top five positions!

The most emotional signs of the zodiac: here is today’s horoscope ranking

Okay, okay, we know: being emotional doesn’t just mean that you have an easy tear or that you are moved by video compilations of animals being rescued! Being extremely emotional can mean that you are unable to control your emotions: you find yourself screaming as soon as something goes wrong, crying bitterly if you see a sad movie, or ultimately being a slave to your emotions.

Nothing wrong with being a person who ” feels ” many feelings and who also manages to express them … indeed!
Being in touch with your emotions is something wonderful and that can often take you much further in life … much more than others!

Of course, we don’t want to say that there is a limit to everything (this is not), but perhaps the time has come to understand how emotional you are.
Do you embarrass others, bursting into tears when no one expects it or making declarations of love after three days, or are you a real block of marble? Let’s find out now!

Emotional? Those born under the sign of Aries? The answer is: yes! The Aries are among the people most emotional horoscope, always ready to take it personally when something happens.
The reason? The Aries is simply convinced that they are the protagonists of a kind of Truman Show: but this certainly does not put them in difficulty!

What I believe, though, is that their feelings have to be theatrical, exaggerated, and completely over the lines.
It will take you five minutes with Aries to find out everything about his life and his feelings … gargantuan!

Have you ever seen an angry Taurus? (And no, we don’t want to make a joke referring to the animal: we are talking about the Bull !). The Taurus is a sign that can not help but give in to his emotions and that, for this reason, end up feeding her insecurity.

The Taurus love, hate, and stressed out as almost no one: they are always ready to think two, three, four, and who knows how many more times what you have said or done and cry or laugh for every afterthought.
In short: the Taurus is very emotional. We warned you!

Even if they would like to ignore it, those born under the sign of Gemini are among the most emotional people in the zodiac.
Does this seem an exaggeration? The twins, even if they try in every way to hide it, can completely revolutionize their lives thanks only to a feeling.

Those born under this sign do not make any trouble to leave it to the emotions to dictate their lives.
For a partner they change the city, political orientation, friendships, or life plan; often, then, they regret bitterly their choices. But what can they do to us if they are so emotional?

This is a real surprise, isn’t it? Those born under the sign of Scorpio rank second in our ranking of the most emotional signs of the zodiac. But isn’t it that we were wrong?
The answer is no: stars and planets are never really wrong!

The Scorpio, then, does not it’s that cold sign and staid there were led to believe other horoscope or, simply, the scorpion itself.
Sensitive and delicate, those born under the sign of Scorpio have a lot of feelings and, unfortunately, absolutely can’t get over them.

That’s why the Scorpio indulges in furious outbursts of anger, why weep in secret after taking a long hard, and why he loves with no possibility of turning back.
Simply, for the Scorpio, it is important not to show anyone that these feelings are there: but they are there!

Cancer: first place in the ranking of the most emotional signs of the zodiac

Yes, dear friends of Cancer, we have ” unmasked ” you, if ever there was a need. Empaths bordering on the disturbing, with a heart that is always ready to bleed and the tear is very easy, those born under the sign of Cancer are the most emotional signs of the zodiac.
There is no history!

Cancer is a sign that feels especially all the emotions: not only understands immediately what are the true intentions of the other but is also particularly sensitive to how the others are addressed.
Often, Cancers happen to say well in advance that a group of people or someone are people who do not excite them and are often taken for exaggeration.
Very often, however, it is revealed even years later that Cancer was right!

Meanwhile, those born under the sign of Cancer live life as much as possible as they are completely enslaved to their feelings and emotions.
If you want to date one, remember that Cancer will always need to know… how you feel!