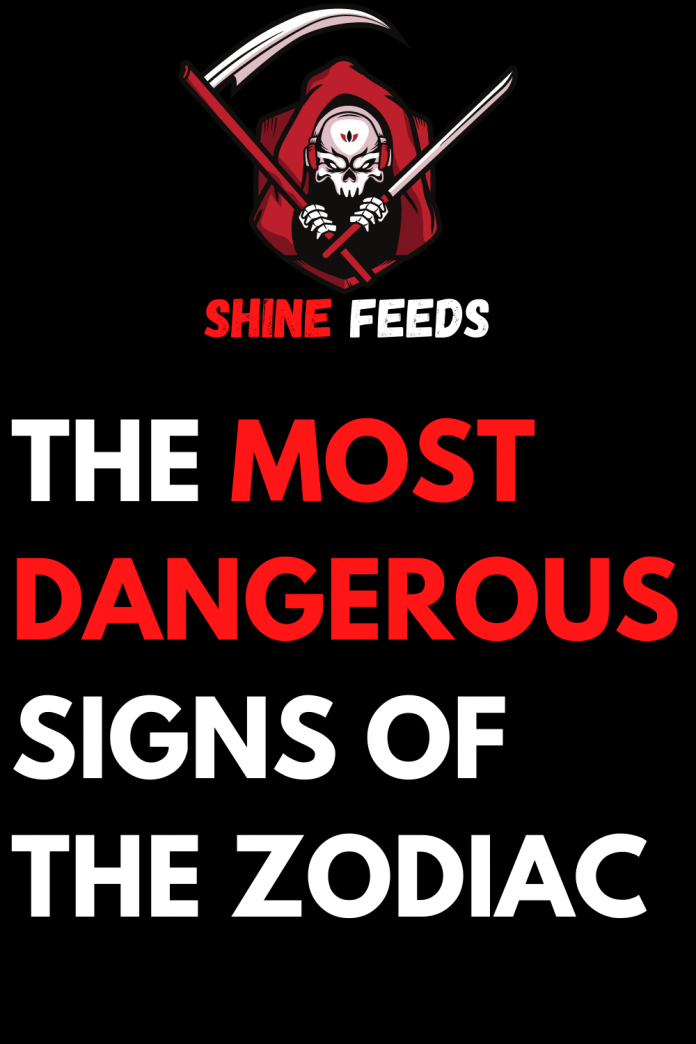 In interpersonal relationships, the dynamics that can be established between people are so many. Among these are both positive and negative ones. And regarding the negative ones, there are so many aspects to take into consideration. In times of conflict, in fact, people can give the worst of themselves and show themselves envious, spiteful, or even dangerous. And when it comes to dangers, it is always good to know what you are facing.

And although there are several variables in this regard, it is possible to rely on some parameters to get an idea of ​​which are the people from whom it is better to beware of more carefully. The stars, in fact, can influence each of us also in the way we act. For this reason, today, we will discover which are the most dangerous zodiac signs and which, on the other hand, can be considered more peaceful.

Aries – Those not so dangerous
In this sort of ranking, those born under the zodiac sign of Aries are among the signs that give the most surprises. Although they are ready to do anything to get the better of any situation, basically they are not that dangerous. Of course, if they enter into the competition they can come to give the worst of themselves. Nonetheless, they are not used to making precise plans to harm others. What matters to them is in fact to be able to achieve the desired result in the shortest possible time. What they try to do with every possible means, even to the detriment of those who find in their path. Having said that, they can be dealt with serenely even in moments of strong confrontation. Their action will in fact always be rather in the light of the sun and therefore predictable.

Taurus – Those almost completely harmless
The natives of the astrological sign of Taurus are people so quiet that they are among those not at all dangerous. When they disagree with someone they tend to make it known immediately to clarify things and find a point of agreement. In a pseudo ranking, they are therefore among the least dangerous signs of the zodiac of all and without any doubt among those with which it is easy to talk and relate even in a phase of confrontation. Dealing with them is therefore a positive experience both when things are going well and when things are going badly. An important aspect to know is to interact with the natives of the sign without particular problems.

Gemini – Those not at all dangerous
Even those born under the zodiac sign of Gemini are people who in a potential ranking are among the least dangerous of all. This depends in part on their never wanting to get into a real fight and on their need to live a life as enjoyable as possible. Although when they are not in the best of moods, natives of the sign tend to become grumpy and unsociable, they never manage to conspire behind their backs or act in a way that is detrimental to others. The most they do is withdraw into themselves or break off existing relationships. Which makes them perhaps not always easy to approach but certainly almost not dangerous at all.

Cancer – Those definitely dangerous
The natives of the astrological sign of Cancer are absurdly among the most dangerous signs of the zodiac. In fact, these are people who, while always appearing sweet and kind, conceal an inordinate need for attention. When they don’t get enough or feel unjustly sidelined, they start harboring negative emotions. And that prompts them to act badly towards people, even those they claim to love. Often passive-aggressive, natives of the sign are always ready to hurt if that can help them feel better. For this reason, if you come to a clash with them it is good to keep in mind the fact that, even if it does not appear, they can prove to be particularly dangerous.

Leo – Those are less dangerous than you think
Those born under the zodiac sign of Leo are people who love to appear threatening when they feel threatened. Nevertheless, on balance, they are less dangerous than you think. This means that even if they may appear combative in a fight when it comes to getting to the heart of the problem, they end up appearing calmer than expected. Of course, having them against them will not be pleasant anyway due to the many threats they can make. However, it is a situation that is more than manageable and less tiring than it might seem at first.

Virgo – Those on average dangerous
Virgo natives are often difficult to understand. Especially when it comes to dangerousness. The natives of the sign, in fact, when they take it out for something or someone, do it with a certain charge of anger. This leads them to cultivate negative feelings towards the people they are dealing with. Thus, if on the one hand, they do not like to openly enter into war with others, on the other hand when they are pushed to the limit, they end up giving the worst of themselves. Having against the natives of the sign, therefore, means being in the unpleasant feeling of being at the center of their machinations. And while these often lead to nothing serious, in some cases they can be quite unpleasant to deal with. With them, therefore, to avoid doubts, it is always better to clarify things so as not to leave unanswered questions.

Libra – Those who sometimes turn out to be dangerous
Those born under the zodiac sign of Libra are people who love a peaceful life. For this reason, in most cases, they are among the zodiac signs that are not dangerous at all. However, these are also often unpredictable people. For this reason, it is not possible to put your hand on fire with them. The natives of the sign, in fact, if provoked or in open war with someone, can prove to be particularly dangerous. An aspect that can cause tensions and create annoyances, even important ones, for those who find themselves having to deal with them. In particular, this way of tending to snap when they have to deal with people who in some way have hurt them. The reason why, when dealing with them,

Scorpio – The extremely dangerous ones
Just like the fame that precedes them, the natives of the zodiac sign of Scorpio are among the most dangerous signs of the zodiac. In addition to being known for their vindictive nature (which makes them extremely dangerous), the natives of the sign hate many things. For example, anything that comes to their eyes is injustice or betrayal. In fact, these are situations in which they lose their minds. Which they do to the point of wanting only to let others experience what they or the people they choose to protect. For this reason, going against them is always a very risky choice and, needless to say, dangerous. Scorpios are in fact extremely good at devising plans ready to harm others. At the same time, they can be extremely patient in waiting for the right moment to act. Predicting them turns out to be practically impossible, at least as it is to understand where they will go to act. Much better to spend energy in not making them enemies and thus live with greater serenity.

Sagittarius – The potentially dangerous ones Those
born under the astrological sign of Sagittarius are people full of initiative and this also occurs when it comes to interpersonal problems. If they are angry with someone, the natives of the sign start pondering different ways to make them pay for it. Most of the time they don’t go very far, just fantasizing and maintaining a closed attitude. Sometimes, however, they can go into a rage. And, when that happens, they become downright unpredictable. If they are furious to the point of being sick, they manage to give the worst of themselves, proving to be more dangerous than you think. An attitude that can create serious problems for those who deal with them. The reason why it is always good to beware of those born under the sign of Sagittarius.

Capricorn – Those who are only dangerous when provoked
The natives of the astrological sign of Capricorn are quite calm and unwilling to go to war with people they don’t get along with. In fact, they generally prefer to just distance themselves and look after their own interests. If they are openly provoked, however, the natives of the sign can completely change their attitude. And they do it by showing the worst part of themselves. That is the one that can push them to act even recklessly. And even if most of the time they end up regretting what they have done, this does not cancel out that their way of acting can be negative for those who suffer it. If you are dealing with them, therefore, it is good to always remember to never provoke them and to avoid heated clashes, especially if it is about situations that are particularly close to their heart.

Aquarius – The non-dangerous ones Those
born under the Aquarius zodiac sign are extremely quiet people. Having clashes with others is in fact not something they are suited to. For this reason, they are among the least dangerous signs of the zodiac. Nonetheless, when they have some problems with others, they always aim to be seen as more combative than they really are. This is why they can appear grumpy, not very empathetic, and extremely cold. However, it is only a facade. The natives of the sign, in fact, when it comes to getting to the fight, always end up pulling back. And all because in the end, what they need most is to be able to live peacefully. Which is extremely important to them.

Pisces – Those who don’t like to be dangerous
The natives of the astrological sign of Pisces are extremely peaceful. Empathic like few, they are in fact always ready to find a meeting point with others. Nevertheless, it cannot be said that they are not dangerous people. Speaking of them it is more correct to say that they do not like to be dangerous. If needed, in fact, they can become so in a very short time and in a completely unpredictable way. This way of making them more dangerous than you think. And all because they can act suddenly but with the same results as those who have planned things on time. A skill that the natives of the sign boast in a completely innate way. For this reason, it is always best, to be honest, and stay on good terms with them. On the contrary, in fact, it will never be possible to know with certainty what one will encounter.