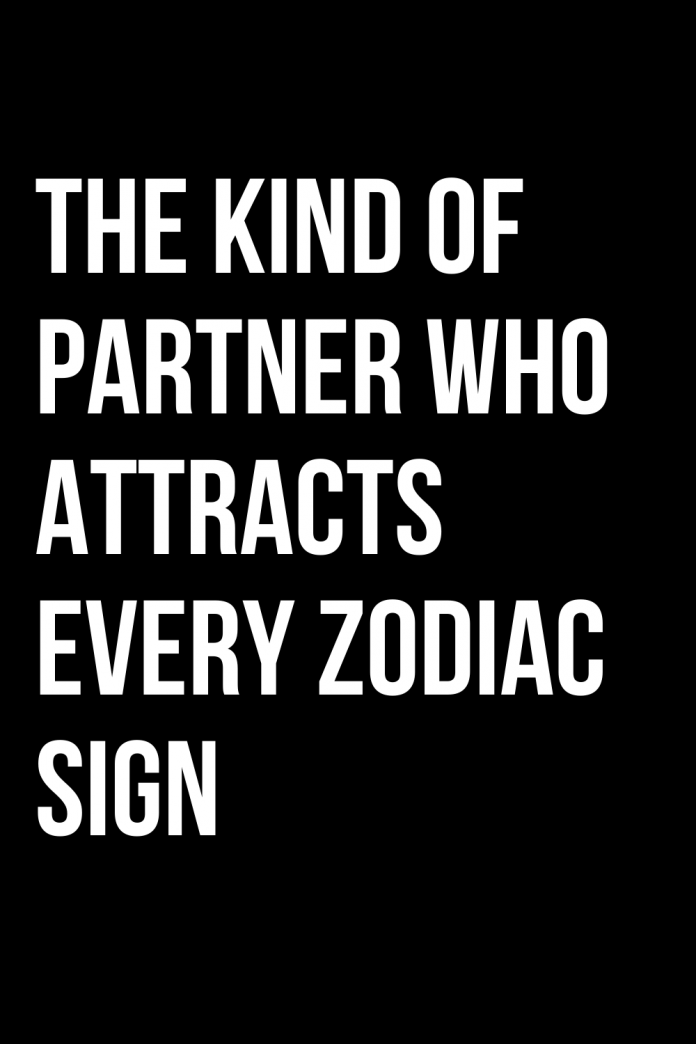 Find out what kind of person attracts each zodiac sign.

Each person by way of being or particular inclinations tends to attract only partners of a certain type. Much depends on the way you speak, the places you frequent, and, why not, the looks you throw when someone finally manages to attract attention more than others. A condition emerges whereby after several unsuccessful attempts one finds oneself wondering what kind of person is attracted to and why.
Well, the stars play an important role in all this because, in addition to influencing the way of doing the various zodiac signs, they also intervene in their choices, especially in the sentimental field. Today, therefore, after seeing what is the biggest mistake that each sign makes between the sheets and what is the truth that no zodiac sign would like to hear, we will find out what kind of person is attracted based on their zodiac sign.

Horoscope: each zodiac sign attracts a specific type of people

Aries – Thrill seekers
Those born under the sign of Aries tend to attract people with a certain inclination towards extreme sports and with an innate passion for life. On the other hand, to be with such active people one could not be otherwise. The problem is when the desire to do both do not coincide on all points, bringing two strong basic characters to collide with each other. It must be said that the natives of the sign are not made for weak people and while they love the feeling of always having won, they also need the fight. For this reason, the advice of the stars is to accept small differences turning them into strengths because other types of partners would be extremely boring in the long run.

Taurus – People in search of safety
The natives of Taurus are self-confident people with clear ideas about their future. Always in search of love, they, therefore, tend to attract people who like them feel the need to bond seriously to build something important. This means that every relationship in their life is destined to become serious, sometimes taking away that pinch of thrill they would like to experience. The truth, however, is that even if they were able to attract people capable of giving them emotions of different kinds, they would not feel satisfied because what makes them happy is the serenity of knowing that they have someone close to them they can trust and who can understand them and appreciate them for their qualities.

Gemini – Easy going people
It is true, Gemini is people who want more than anything else to be able to surround themselves with people who know how to make their life more lively by bringing something new to explore every day. Their character, however, is not suitable for people of this type who obviously would not know how to grasp and understand their way of being and the many phases they go through even in a few days. The suitable partner must therefore be, first of all, accommodating and able to appreciate them for their streak of madness, welcoming them when they feel depressed and following them when they choose to throw themselves into something new. Two similar heads would be completely incompatible and perhaps by understanding this the natives of the sign will finally be able to find the right person.

Cancer – Reserved people
Those born under the sign of Cancer would like to have people who can motivate them and give them new energy every day. Due to their way of being, however, they tend to attract more reserved people. This happens because they often find themselves wanting to be the center of attention and this leads to attracting those who, unlike them, cannot get out of their shell. However, a type of relationship emerges that can work as long as mutual needs are recognized and respected without one ending up trying to go beyond the other. For natives of the sign, after all, what matters most is to feel loved and always have the way to be able to talk about themselves and to give vent to their emotions. Which would hardly be possible with extroverted personalities who are always eager to talk about themselves.

Leo – The demanding people
The natives of Leo usually attract people similar to them or in need of getting as much as they can from life to always feel on the crest of the wave. The problem arises when they find someone who also wants to be the center of attention by threatening to overshadow them. On the other hand, people who are passive or who are unable to stimulate themselves properly would not have much hope of being with them. For this reason, their only chance to find the right person is to immediately understand if those around them can act as a shoulder, contenting themselves with being the person alongside that protagonist.

Virgo – Emotionally lively people
Those born under the sign of Virgo are so poised and rational that they attract people who being emotionally lively tend to have an almost unconscious need for order. It is a difficult combination to frame because the natives of the sign-in turn need fixed points but at the same time feel attracted to those who show themselves differently from them. The only way to understand if there is a way to move forward together is therefore to try to get to know each other better and to understand if it is possible to balance together.

Libra – The Lovers of Elegance Libra
natives are so elegant in their ways of conceiving and conceiving life that they attract partners who in turn admire all that is beautiful and feel the need to partner with people in elegant ways, just like their. It is a combination that usually works especially if this feature is combined with intelligence and the desire to constantly confront with calm tones. Those born under the sign of Libra, after all, need to feel intellectually stimulated, which is why they may find that they are easily related to the very people they naturally attract.

Scorpio – Sharp and understanding people
Those born under the sign of Scorpio are known for their difficult temper and rather bulky personalities. Full of charm, they easily attract people with different personalities but end up intimidating anyone who is not able to understand them at least a little. At the end of the games, therefore, they find themselves attracted to themselves people who are keen and eager to know them better. For things to work, however, there must be also a lot of understanding on their side. Because only with this is it possible to understand them and bear them in the heaviest moments. In short, it is a true natural selection where only those who manage to mix more characteristics will choose to stay until the end to win their heart.

Sagittarius – People who love to have fun
Being alongside the natives of Sagittarius can initially be fun but over time it becomes challenging. Their desire to live and explore the world seems to have no end. Fortunately, they are so predictable from this point of view that they only attract people who can manage their many needs and who often choose them precisely because they are driven by the desire to have people at their side who are always able to offer new stimuli. Their desire for independence is also often a reason for attracting others. Sometimes, however, for this reason, they risk attracting people who just want an adventure. This is why they should be careful before choosing who to bond with.

Capricorn – People of Habit
Always loyal to duty, Capricorn natives mostly attract people who enjoy routine and who are resistant to change. The order they impose on their lives is seen as a godsend by those who, perhaps more chaotic, aspire to a daily routine capable of giving a certain sense of security. It is a combination that can even be functional unless on the other side there is a desire to “sit down” and carry on a relationship devoid of stimuli, something that the natives of the sign would not tolerate, needing as they are to escape. at least once in a while from the reality full of rules in which they have locked themselves up.

Aquarius – Unconventional people
Those born under the sign of Aquarius, are definitely over the top people who tend to attract those who, in turn, love the idea of ​​joining someone different. The problem arises when the lonely soul of the natives of the sign emerges with arrogance accompanying the scarce if the not non-existent, propensity to smooth their edges. A not indifferent detail that can make any type of relationship difficulties and that will lead many to give up. Only those who feel deeply attracted will remain, now aware of having to accept the Aquarius as they are.

Pisces – People who can dream
Pisces is very special and difficult to understand people. Empaths, dreamers, and often with their heads in the clouds, tend to attract people who, albeit unconsciously, feel a great need to dream or even to evolve from a spiritual point of view. These are therefore particular encounters that can enrich even the natives of the sign by giving them other points of view. As for the success of the relationship, a lot depends on the ability on both sides to make the differences coincide and to be able to find a balance that allows giving the right weight both to the dreamy and utopian part and to the one that still needs to remain in reality.