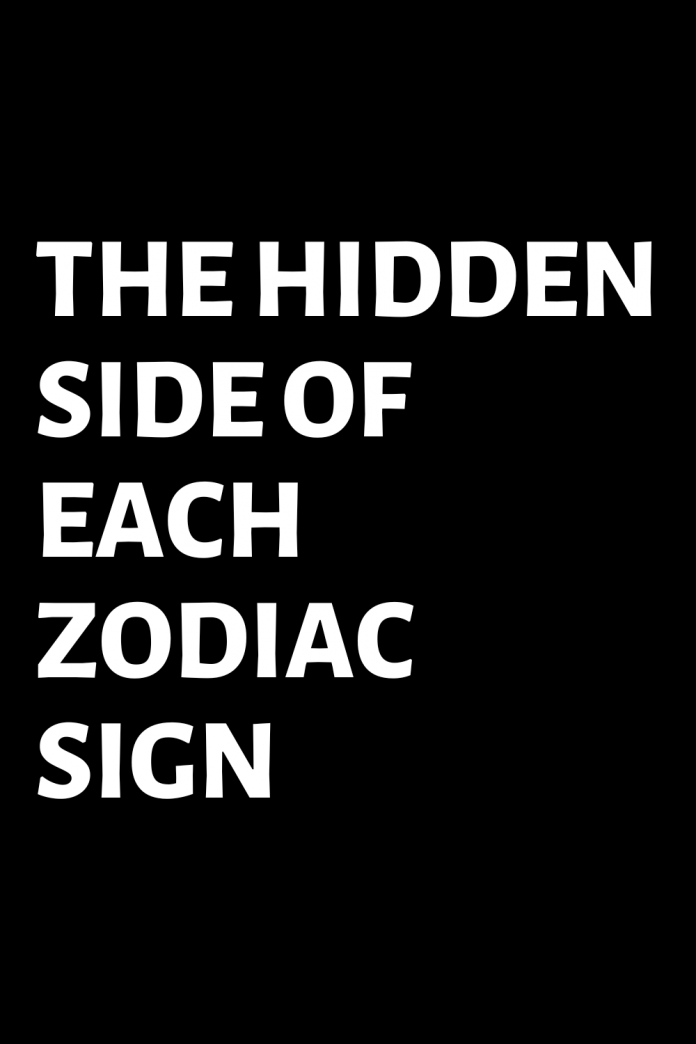 Each zodiac sign has a hidden side, find out which side is that of those around you.

Each of us, when we meet another person for the first time, tends to make a first impression . This can be right or wrong and most of the time it is very superficial as it is created on the basis of a quick glance and the exchange of a few words. Nonetheless, hardly anyone manages to remain without judgment, waiting to know better who is in front of him. A problem that weighs heavily on the timid or those with a complex personality that tends to emerge only over time. The risk is in fact that of being only half known or even not being known at all, victims of the so-called first impression. A situation that can also be seen with the zodiac signs that often appear very different from how they actually are. In fact, it should always be remembered that in addition to being halfway between the zodiac sign and the ascendant we are all inclined to appear different from how we are, some for defense and some for difficulty in opening up. Today, we will try to get to know those around us better, learning to distinguish how it looks from what it really is.

Aries – Aggression
Those born under the sign of Aries appear to others as energetic and in constant motion. A real side of their character that characterizes them well but does not reveal everything about them. In fact, what does not appear immediately visible but which becomes increasingly clear by frequenting them is that Aries are also very aggressive and always ready to attack in order to get what they want. It is therefore wrong to exchange their energy as a merely positive side and an indication of good humor and cheerfulness. That same energy, over time, could be used to take the field to fight for something you want. And in these cases, it is good to remember that those born under this sign almost never compromise but aim for a clear and overwhelming victory, regardless of who they are in front of.

Taurus – The resoluteness
Those belonging to this sign generally appear as lazy and listless people, eager only to experience pleasant moments such as those related to food or indiscriminate rest. While this is actually part of their way of being, it is completely wrong to simply classify them as lazy people. In fact, Taurus are resolute souls and who when they have something in mind they carry it forward to the end and never looking back. Of course, most of the time they can appear distracted or disinterested in the world around them. The truth is, they’re just waiting for something to pique their interest. In this case, their spirits will light up like never before leading them to take any action to get what they want.

Gemini – Conscientiousness
Gemini is among the signs of the zodiac with greater difficulty in making themselves known. Famous for being moody, they have a character that at first often leads them to appear for what they are not. Those who look at them only superficially will get the idea of ​​capricious and fickle people. The truth, however, is very different. True, they are often focused on finding new ways to not get bored. This, however, does not make them fickle people. If in an important relationship, in fact, they tend to be very conscientious and very present so that they can be a real point of reference for those they care about. What matters is to want to know them fully, entering their world and exploring it without hasty judgments. Only in this case, in fact, will they be willing to show themselves for what they really are.

Cancer – Shyness
Those born under this sign often appear as romantic and intent on living in a world of their own. In truth, they are much more complex this way and often divided between the desire to express themselves fully and the fear of being judged in a negative way. This leads them to never really being themselves unless they are faced with a person they know they can blindly trust. To get to know them well, therefore, it is necessary to be open and available, giving way to their innate shyness to step aside.

Leo – Loyalty
Most people tend to mistake the leadership of those born under the sign of Leo for aggression or detachment from people. In reality, Leos are generally very loyal people and always willing to go out of their way to help the people they care about. Their ability to be undisputed leaders does not interfere with their ability to love others. Obviously, however, to enter the circle of their affections it will be necessary to know how to give and not to judge them from the first meeting. In addition to being extremely loyal, they are also very sensitive.

Virgo – Intelligence
Often those born under the sign of Virgo are labeled as people closed in their beliefs and limited by prejudices. The truth is that they don’t like change and this often leads them to withdraw when they are faced with new situations or people. Their instinctive “shyness”, however, is only a shield behind which a world hides and above all an intelligent person who, even if he does not show it, always has a personal idea of ​​what surrounds him and who knows how to be very sharper than you think at first glance. Seeing is believing.

Libra – Introspection
People born under the sign of Libra are often focused on what is beautiful and how to look the best. This leads them to appear more superficial than they really are. The truth is that the members of this sign are very reflective people, who tend to ponder over every little thing and who in life need to reflect for a long time before making even the smallest decision. This constant introspection can make them appear closed in their world and detached. In reality, it is enough to try to deepen the knowledge to discover the world that lies behind their every gaze.

Scorpio – Romanticism
Those born under this sign are known for their aggression and the charm that distinguishes them. This leads most people to stop at appearances and see them as strong and perhaps even numb people. The truth is that behind their armor hides a heart dedicated to romanticism and that many times it would be enough to deepen the knowledge to discover a person able to love absolutely and to have feelings so intense as to feel bad. Which is why more often than not, they are forced to protect their heart with a shield.

Sagittarius – The seriousness
With their desire to travel, always be among the people and find new ideas to have fun, Sagittarius often appear as superficial people and whose only interest is precisely to find new ways to pass the time. In fact, besides being very interesting, they are also very serious people. An aspect that, however, they tend to keep to themselves, aware of the fact that people often prefer their fun side. To get to know them well, therefore, you need to give them time and show interest in discovering even the most hidden sides of their personality.

Capricorn – Positivity
Those born under this sign, taken as they are by their thousand daily activities and by the desire to succeed in everything they do, appear to others as serious people beyond all limits. For this reason, they are often labeled sad or dull. In truth their only problem is the difficulty in communicating and showing themselves for who they really are. In fact, within themselves they hide a dreamy and positive side that often pushes them to see life even more beautiful than it is. Too bad that too often they keep these thoughts hidden, reserving them only for a select few.

Aquarius – Hyper criticality
Apparently self-centered and only interested in appearing and putting themselves at the center of attention, those born under this sign are very hyper critical. Often they hide an inner conflict that those who stop at appearances could not even remotely imagine and which therefore makes them unreachable by most people. Those who are in confidence with them know well, however, how they are always ready to go out of their way for the people they love and who know how to put before themselves as long as they know they are understood, loved and accepted for what they really are.

Pisces – Kindness
Too many times those born under this sign are labeled as sensitive and romantic people. An aspect that often makes them “victims” of those who think they can take advantage of these qualities to be heard or helped. The reality, however, is quite different. Pisces are perfectly capable of understanding those around them and always know when someone is trying to take advantage of them. What many mistake for sensitivity or empathy (qualities that they still have) is often just a form of kindness that, over time, can fade, leading them to close their bridges without warning. It is therefore very important to always try to be honest with them without taking too much advantage of their courteous ways. The risk is in fact that of being abruptly removed, without any possibility of appeal.