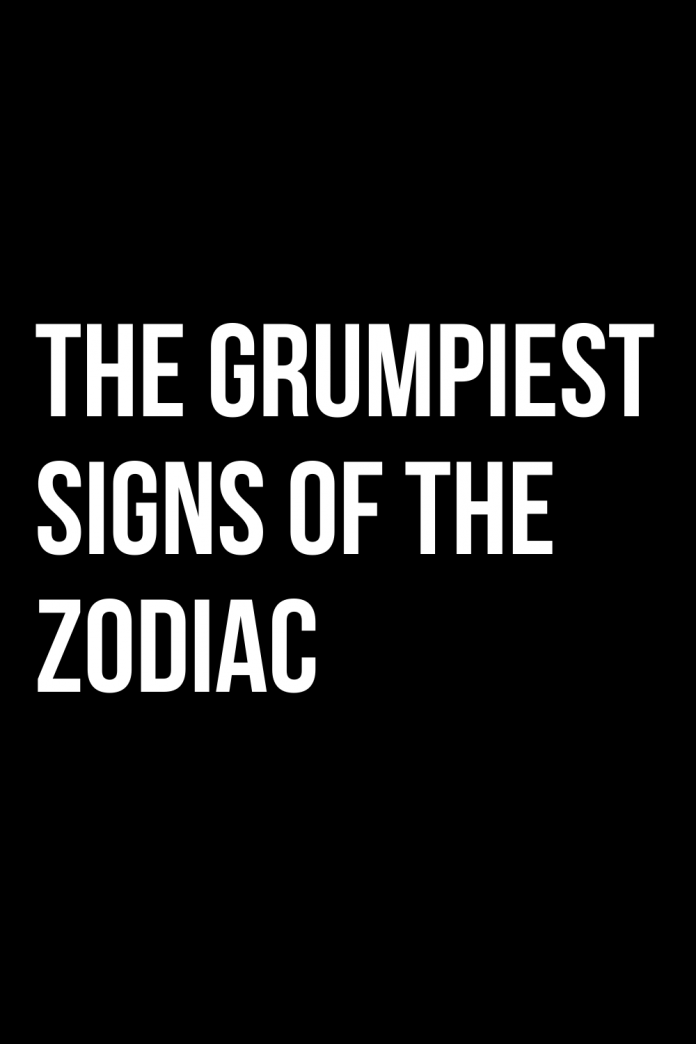 Find out which are the most grumpy zodiac signs of all. The opinion of the stars.

When it comes to social relationships, it is often difficult to understand how to behave with others, especially if they are difficult to deal with. While on the one hand there are people who are always courteous, perhaps even in the presence of a strong antipathy, on the other hand, there are others who, on the other hand, do not mind showing themselves for how they feel, even going so far as to be grumpy.
Beyond the type of person that you may prefer, being grumpy is a way of doing that is partly influenced by the stars as well as by the mood of the moment and the personal experience. Today, therefore, after having seen which are the zodiac signs that are always angry and which are the funniest ones, we will find out what are the most grumpy signs of the zodiac. Since this is a way of doing things closely linked to the way of feeling, it is advisable to also check the profile of the ascendant of the sign that you want to verify.

Horoscope: this is how grumpy the various signs of the zodiac are

Aries – Quite Grumpy
Those born under the sign of Aries are people who don’t care much about how they may appear to others. If they are upset about something, if they feel tired or are simply sleepy they can then appear grumpy and all without bothering to soften the tones. For this reason, being around him can be difficult at times, especially if you have a quiet personality or are shy. Those who can stand up to them, on the other hand, can safely avoid worrying about their bad moments that tend to vanish in an instant, exactly as they arrived.

Taurus – Not Grumpy
The natives of Taurus are generally friendly people and prefer to always be smiling. Being grumpy, therefore, is not a way of being that belongs to them as long as you don’t make them angry. In this case, it is possible to see a transformation otherwise difficult to imagine where to defend their territory they can also use brusque and more direct tones than usual. Exceptions aside, they are people who prefer to keep the atmosphere always relaxed so that they can live in peace and have no problems, an aspect of life from which they always try to keep away.

Gemini – Intermittent Grumpy
Those who know Gemini know that at times they can become so grumpy that they leave you speechless. The bad thing about them is that they do it abruptly, switching from one mode to another without giving almost any explanation and leaving it to others to figure out what happened. And since most of the time the problem is not outside but inside them, helping them or changing things is difficult. On the other hand, it must be said that when they are not in the negative mode they can be so sweet and kind as to be forgiven any possible wrong. An advantage that they know they have and that they don’t hesitate to use to their advantage. But this way they do it is also part of their charm, which is why in the end you tend to leave them almost all won.

Cancer – Quite grumpy
It wouldn’t seem like it, but the natives of Cancer, despite being very sweet people and related to others, are among the most grumpy in the zodiac. If something goes wrong, they immediately sulk and behave unexpectedly, surprising those who do not know them well enough to expect such a way of doing. Regardless of this, they continue on their path, ignoring the possible consequences they may face. This makes them difficult to understand and accept, especially if they are not linked by deep feelings. Fortunately, when all goes well they know how to be kind and behave in a way that makes you forget what happened. This, however, on the other hand, makes it even more difficult to bear other grumpy attitudes which, when put in place by them, are always out of tune.

Leo – Grumpy When You Need
For those born under Leo’s breast, being grumpy is part of the “job.” If this is to get them to gain points and attention from others, then they won’t hesitate to engage in hostile attitudes. When not needed, however, they are always sunny and kind, ready to spend words full of positivity for everyone. Too bad that this is true as long as the spotlight is focused on them. If someone dares to take them away or contradict them, their grumpiness will emerge stronger than ever. To be close to him, therefore, you need a lot of patience or little desire to be in the foreground.

Virgo – Grumpy by Nature
Virgo natives are people who rarely pay attention to shape and even at the cost of hurting others, they almost always say what they think. On the contrary, they are not good at accepting the opinions of others, especially if they go against them. When this happens, their grumpy side emerges with overwhelm, leading them to say or do things they may regret. Even knowing they were wrong, it is very difficult for them to apologize. For these reasons they are not good at maintaining friendships and the only people who can stand by them are those who are particularly patient or who know them so well that they can deal with this particular side of their character.

Libra – Not grumpy
Those born under the sign of Libra are almost always quiet people, who love harmony and therefore try to pursue it. Excellent listeners are always kind and courteous and when they can they also try to give useful advice. Seeing them in a bad mood is rare because when they don’t feel they are among others they prefer to isolate themselves. If they find themselves forced to interact in moments when they are taken by something else, they could therefore appear grumpy. Not in a rude way but simply distant because closed in their cocoon. In these cases, the only thing to do is leave them alone because pressed they could bring out the worst in themselves.

Scorpio – Grumpy Only When Provoked
The natives of Scorpio are usually peaceful people who tend to never seek confrontation. Strong of character, however, if someone comes to provoke them they do not hold back and end up becoming grumpy to unimaginable levels. It is a bit of their way of making it clear that it is preferable not to step on their toes and that doing so would only lead to unpleasant results. We are still talking about the most vindictive sign of all and if we put these two sides of their character together it is more than clear that it is preferable to never get to the fight.

Sagittarius – Grumpy
Yes, sunny, cheerful, and carefree as they are, those born under the sign of Sagittarius hide a grumpy side that can emerge at any moment. To change their way of being there are usually gestures that they perceive as wrong towards them, betrayals, and actions that generally annoy them. When this happens, instead of saying what they think they prefer to pout and be grumpy. It is also true that in some circumstances their way of being may depend on a state of mind that has nothing to do with the people around them. Understanding them is therefore often complex and only those who have known them for some time can read them enough to understand what is on their mind.

Capricorn – A little grumpy
It cannot be said that the natives of Capricorn are grumpy people, when they feel down or do not want to interact, however, they end up assuming attitudes or ways of doing typical of those who are grumpy. Most of the time they do not realize it and if it is pointed out to them they will be ready to apologize as they repent of their ways. Every so often, however, they too lose their temper and when this happens the way they point it out is precisely to be deliberately grumpy and difficult to deal with. Sometimes they do this just to be asked what’s wrong. The situation in which when asked, they will answer with extreme sincerity, even going so far as to let off steam.

Aquarius – Grumpy
Those born under the sign of Aquarius are very sensitive and touchy people, they also don’t particularly like being among people and when they happen to do so reluctantly they can get to be grumpy. Not caring much about what other people think, they don’t care about hurting someone so the only way to avoid their ways is to stay away from them, please them.

Pisces – Not at all grumpy
Pisces is among the more accommodating signs of the zodiac. Always attentive to others, they are not grumpy even when they have every reason to and this is because they are always afraid of being able to hurt those around them with their words or actions. Of course, if they feel attacked then it is likely that they will take it out or use harsh words to defend themselves. Inside of them, however, they always suffer at the thought of hurting someone and most of the time they end up repenting even if they were right. These are sensitive people who know how to understand the emotions of others and who for this very reason have great respect for them.