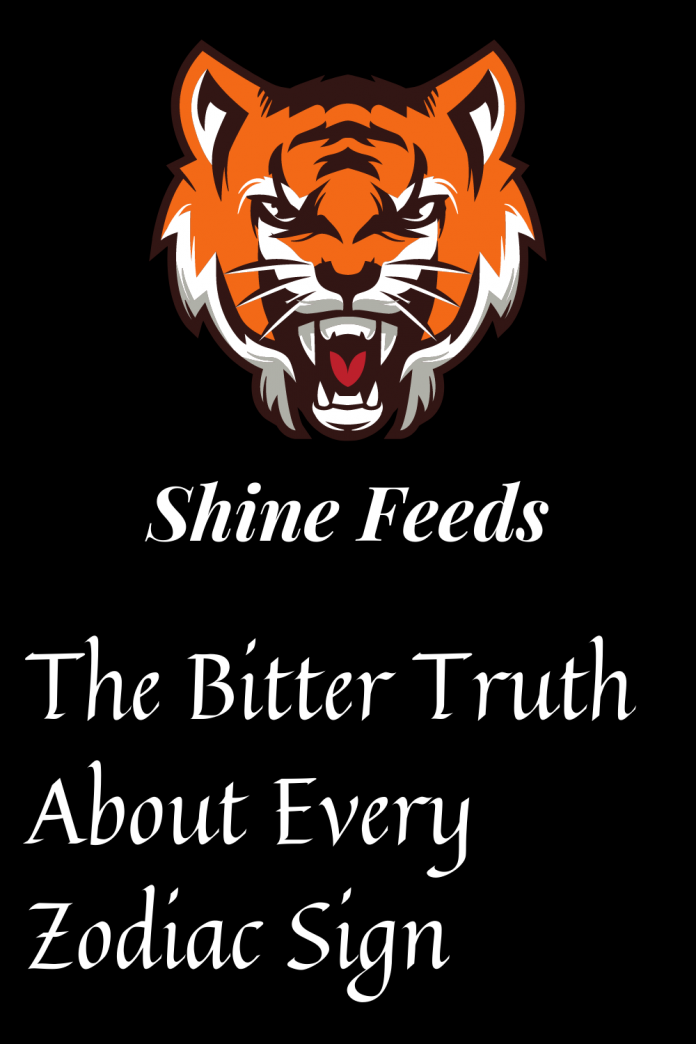 Who doesn’t have imperfections? Even a person who seems perfect is full of weaknesses. However, most of us are very insecure about the weaknesses in our personalities and try to avoid talking about them as much as possible. But sometimes it’s better to face the bitter truth. And what better way to know the bitter, honest truth about yourself than to get the help of your zodiac sign. The orientation of the planets at the time of your birth has a strong influence on the type of person you grow up to be. Therefore, astrology constitutes the bitter, insulting truth about every zodiac sign that you would rather not know, but which you should absolutely face.

You think that you are the leader, but sometimes you are just plain chaotic and directionless. You may not realize it, but sometimes your ideas are impulsive, your decisions are rash, and as a result, your projects go unfinished. You have to get your shit together and let someone else take charge for a change!

Aries pride themselves on being the person who gets the job done. But if you’re disorganized, your energy is chaotic, and every step is spontaneous, you won’t end up completing a single project that you set out to do.

One more thing, you need to show more appreciation for all of the things that you are blessed with – loving friends and family, a good job and happiness instead of always wanting more. Do not complain about what is lacking in you; show gratitude for everything you have!

The bull is stubborn as hell! It’s one thing to be resolute, but completely closing off other people’s ideas, perspectives, and visions is not healthy at all. Often times, you make the wrong decision and because of your bigotry you stop growing in life.

You want to prove that you are right even when you are wrong. Everyone knows that arguing with you is pointless because you simply refuse to deviate from your point of view. You have to open yourself to new ideas and possibilities, otherwise you will end up taking the well-trodden paths that ultimately lead to stagnation.

As harsh as it sounds, you are bad at expressing feelings. You lack emotional depth. As a twin, an air sign, you are naturally flighty and superficial.
Geminis are social beings, so they always have a lot of people around them, but they cannot share an intense connection with anyone. They find it difficult to commit to one thing. Their feelings are mostly fleeting and superficial, and they are confused about most things in life. But Gemini find it difficult to accept this truth about them.

Feelings are good, but not when they make you overly sensitive and full of insecurities. Cancers are so emotional that even the smallest things hurt them. They are very sensitive and still try to protect themselves with a hard outer shell. And they just hate it when others find out exactly how vulnerable they are.

They are so insecure that they conjure up problems in their mind that are not real. Don’t get lost in the clutter of your emotions. Remind yourself that your well-being comes before everything else and no one but you can give yourself the love you deserve.

You want to be the best in everything you do and you just can’t handle it when someone outdoes you. Although Leos try to appear nice and happy, it consumes them inside when someone is better at something than them. They have a keen sense of competition and that is why many of them excel in academic subjects. You always want to be at the top of the game. However, you need to learn to accept when someone else snatches the winner’s place. Humility is essential.

Leos can be very self-centered. You need to understand that it’s not always all about them.

You take pride in being a perfectionist, but everyone is frustrated with you because you are so obsessed with perfection. And what is it about you that you criticize every aspect of every person’s life? That puzzles others – don’t you really have anything better to do ?!

The real reason you need to be perfect is because you try very hard to find societal expectations. You seek approval and admiration from a few special people you are trying to impress, perhaps your parents or a professional connection.

Scales are fascinated by beauty and aesthetics. You will be captivated by visually appealing things and will become connoisseurs of various types of art. But the bitter truth is that this zodiac sign has shallow and superficial standards of beauty and is repelled by “ugliness”.

Libra, you should face the truth – in today’s world, your views on beauty are backward. The result is that you fail to see the real beauty in people and appreciate them for who they are.

Libras are inherently polite and friendly, so they will never be outright rude to anyone, but deep down they are likely to think like everyone or everyone “lacks symmetry” or in some other way criticize when things are not theirs Meet beauty standards.

Beneath its cool and hardened exterior is a volcano waiting to explode. Scorpios are deep, but they have an emotional tornado within them that can lead to a sudden and large emotional outburst.

They try their best to keep their emotions in check and present a cool serenity to the world. Then when they break out, they just hate being out of control! Her breakouts are in stark contrast to her cold demeanor, which is why most people think they are erratic.

Sagittarius prides itself on being an open-minded character who does not judge others, but when they think strongly about something, their conversations have no filters. They speak without thinking, and as a result, they could badly hurt people without even realizing it.

Plus, they think that they are always right and therefore rarely regret their rude and hurtful behavior.

There are some people who try to make themselves feel better by making others feel bad – Capricorn is a classic example of this type of personality. You are very pessimistic by nature. They list their weaknesses and feel bad all the time. What’s worse is that they are so insecure that they call attention to other people’s weaknesses in order to hide their own. They point out all of the wrong things other people do so that their own mistakes are never criticized.

You should really try to control your terrible mood swings. Where’s your fun side ?!

Known for being profound and progressive individuals, in reality they are very judgmental. It’s hard to believe that free thinking thoughts can be so judgmental, but the truth is that Aquarians have a set set of opinions and usually think they know best. Though they may not express it, but deep down they are judging you.

What do you do when you just feel too much? You create a bubble that is supposed to keep the pain out. The real world is tough, and the truth is that this sensitive and compassionate zodiac sign lives in a cocoon because they don’t know how to deal with how intensely they feel everything. You build a wall around yourself and try to rule out all kinds of emotional interactions with other people. And they never want to admit to themselves that they are actually doing that.

That was the hard and bitter truth about every zodiac sign for it. It has to be hard to digest, but being open to constructive criticism is essential because that’s what actually helps you grow in life.