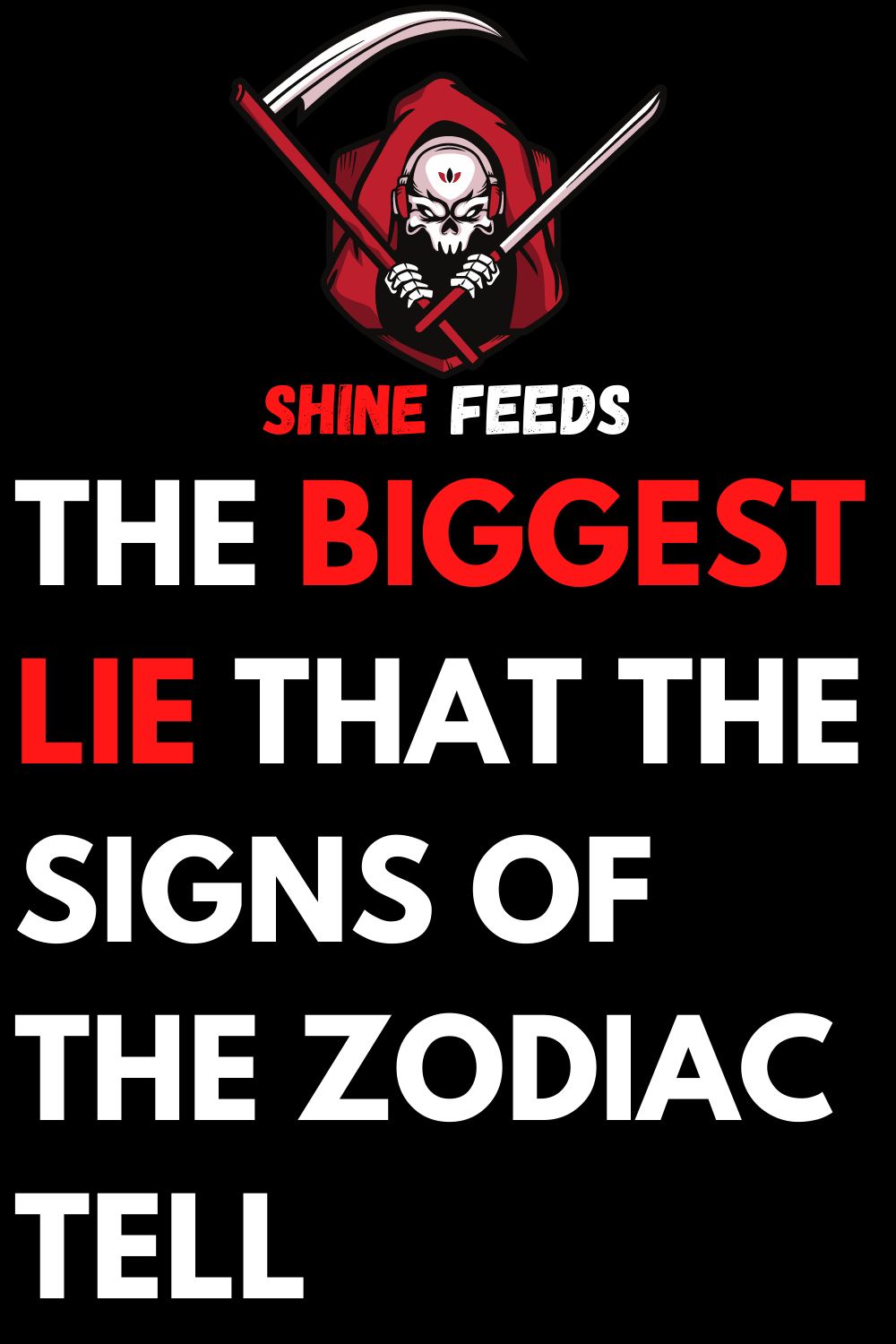 THE BIGGEST LIE THAT THE SIGNS OF THE ZODIAC TELL

Find out what is the biggest lie of the various signs of the zodiac. And what they used to lie about. The answer of the stars is signed by sign.

Lying, you know, is not a nice thing. Many times those who lie end up putting an end to even important relationships and all without achieving their goals with certainty. On the other hand, hardly anyone can always be honest with everyone. Of course, there are different types of lies in the world ranging from those that are intended to deceive others to that so-called good and that instead aim to protect.

Nevertheless, lies almost always end up hurting, not only those who receive them but also those who tell them. And even if the saying says that lies have short legs, for those who are subjected to them, time takes on a completely different value. For this reason today we will try to find out in what the various signs of the zodiac lie most often. Although it may seem strange even the stars can influence this delicate and important aspect. Ready to find out what awaits you?

The biggest lie that the signs of the zodiac tell

Aries – Those who exaggerate their abilities
Those born under the Aries zodiac sign are people who love to show off. Thus, the biggest lies they can tell are about their way of being and performance. To appear more important they are willing to shoot it big. What they do with a smile on their face and without ever getting upset. These are people who always and only aim to have fun and who do not want to build castles of words to remember from time to time. Discovering them, therefore, is much easier than you think. Something that the natives of the sign are aware of without worrying about it. Usually, what matters to them is the attention of the moment. Moreover, even after being discovered, they don’t have much trouble, continuing to lie with a smile on their face.

Taurus – Those who lie about what they did
We assume that the natives of the astrological sign of Taurus do not like to lie. They need to live a life as relaxed as possible. And to achieve this, their greatest desire is to have no problems whatsoever with anyone. That said, now and then, if they know they can have discussions they would rather avoid, they are willing to tell a few lies. Usually, this can be done to hide something they have done that they know is not appreciated by those around them. When they decide to omit something or hide a particular fact, their way of lying is exemplary. And to win it, they are willing to fight in every way, denying even the obvious. However, this is a very rare situation. The reason why,

Gemini – Those who make up stories
Those born under the astrological sign of Gemini are particularly good at telling stories. Most of the time they do this with the sole purpose of having fun or getting a reaction of some kind from their interlocutors. That said, they don’t enjoy lying about serious things. And even though when they choose to do it they are good enough to be perfectly credible, they generally only make up stories that they know they can support for a long time. Occasionally they can use this ability to hide a betrayal or to protect a friend who asks them to create an alibi for him. However, these are very rare situations and of which they are not always proud. Despite appearances, these are people who love to be among others and who for this reason, when they can, prefer not to have to resort to lies.

Cancer – Those who say what others expect to hear
The natives of the Cancer zodiac sign love to build pleasant relationships with people. If to do this they have to lie by saying something they don’t think but others expect, they don’t have much trouble about it. For them, what matters is the results. And when it comes to relationships, the thing they crave the most is the possibility of having pleasant relationships with the people they care about. Hearing lies from them is therefore very likely. It is always good to remember, however, that most of the time they don’t build stories from scratch but exaggerate what they already have in their hands. Which, absurdly, makes them even more credible.

Leo – Those who cover up the mistakes made
Those born under the zodiac sign of Leo have an extreme need to please others. Just as they need to always feel at the center of attention. Loving to always appear like smart people, they tend to lie about mistakes made. The natives of the sign, in fact, never manage to admit (not even to themselves) that they have committed a wrong. And when this happens they prefer to immediately build an alibi that can protect them and make them appear as strong, self-confident, and particularly smart people. These are therefore people a little over the top and often difficult to understand. It must be said, however, that it is also difficult to discover them. Unless you know them well. Those who frequent them and have the right sensitivity can grasp the subtle changes that affect them when they try to cover up an error or a small lack.

Virgo – Those who lie when they look for excuses
The natives of the zodiac sign of Virgo are people who do not like lies very much and in particular, cannot bear being told about them. Nonetheless, when it comes to them, they are always ready to find loopholes. If it is a question of finding an excuse not to go out or to avoid a meeting they do not want, they are ready to lie and tell about impediments that do not exist. Fortunately for them, it is not about lies that are discovered. And the rare times that this can happen, they always know how to handle the situation by throwing it all on the funny aspects of the lies being uttered. A kind of defensive that works at least half the time.

Libra – Those who embellish things
When it comes to those born under the zodiac sign of Libra, it cannot be said that they lie shamelessly. What they tend to do with a certain simplicity is to embellish everything they can to let others experience a world made to measure and surrounded by beautiful things. This is an aspect that is of some importance to them since living in a world without embellishment is something extremely painful for them. We can therefore say that they are not good at lying but that when they want they can tell detailed stories about what concerns them. Stories that have the power to fascinate others and that for this reason, the rare times they have discovered go quite unnoticed.

Scorpio – Those who lie to keep their privacy
The natives of the zodiac sign of Scorpio do not like lies. However, they have such a need for privacy that they are willing to tell a few lies when faced with the intrusiveness of the people. And all to get the time they need so as not to reveal themselves too much. For them, it is, therefore, more of a form of defense than outright lies. The reason why the natives of the sign never feel guilty. It is also important to keep in mind that when they do so they do it with strangers or with people they are not particularly familiar with. In fact, with the people they love, they are quite sincere. Indeed, at times it can be said that they are in an almost brutal way. Reasons why the natives of the sign are known to all as among the most sincere and direct of the zodiac.

Sagittarius – Those who lie to gain charm
Those born under the Sagittarius zodiac sign are not exactly people who lie. Nonetheless, they are fully among the signs that do so. And all because to appear mysterious and fascinating they are willing to tell some stories. Whether it is a matter of omitting details or exaggerating some particular that concerns them, the natives of the sign are therefore able to tell lies without feeling in the least in the account. What matters to him is in fact to be noticed, to please others, and to appear as smart people, to be envied and able to do things that others would not be able to do.

Capricorn – Those who lie to manipulate people
The natives of the astrological sign of Capricorn are most likely among the zodiac signs that lie the most. To be honest it can be said that these are people who love to manipulate others and who are willing to do anything to do it. Therefore, moments of sincerity cannot be expected from them. Trusting what they say corresponds to the risk of pushing them to tell ever new lies. Fortunately, those who know them well can learn to understand when they are shot big. The natives of the sign have a unique way of doing that, in the long run, can be anticipated and understood in time. The problem? Even in the face of the evidence, they will never admit their lies.

Aquarius – Those who lie because it suits them Those
born under the astrological sign of Aquarius do not usually have big problems with lies. Thus, they can spend a long time without telling them and then make up for it in a single day. To push them towards lies is the desire to live in peace. So, if on the one hand they always try to tell the truth, when they understand that this way they cannot get what they want, they change their strategy by starting to lie. This happens especially when they do not want to go out and are faced with too much insistence or when they simply feel comfortable doing it. However, their lies will always be small and simple. Perfect not to overload them and to make them always feel at ease with themselves.

Pisces – Those who lie only out of necessity
The natives of the astrological sign of Pisces are people who do not like to lie and who try to avoid it as often as they can. But if they need them, they are particularly good and they are to the point where discovering them is difficult. In that case, only those who know them deeply realize that they are saying something that is not true. The natives of the sign are sincere and crystalline people. People who do not like falsehoods and who, consequently, feel uncomfortable having to distort themselves by saying things that are not true. It is therefore a strategy that they implement only if they feel cornered. Which, however, they avoid doing with the people they love.