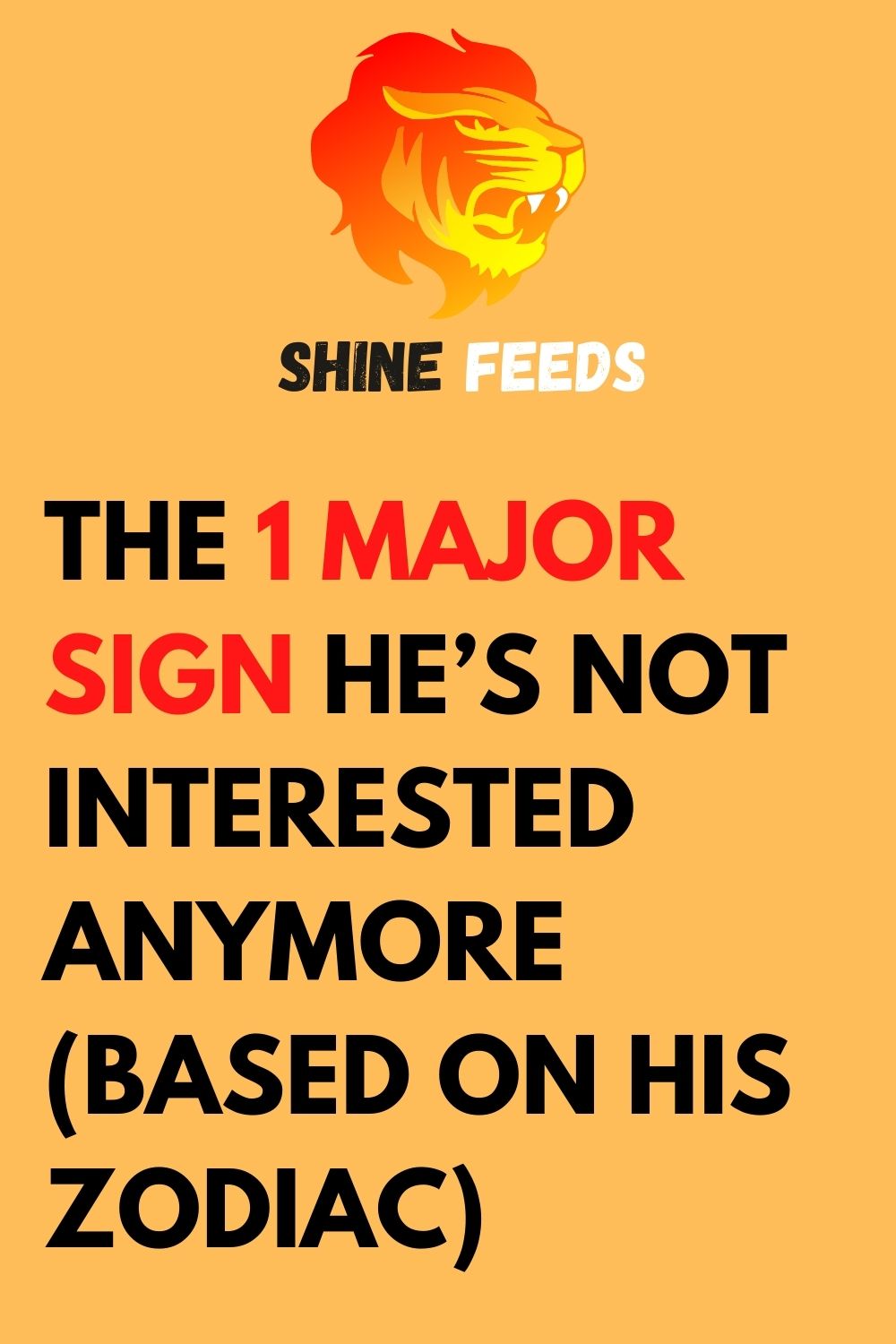 If guys could walk around with signs explaining that they’re ready to break up with their girlfriends, that would be pretty great. Okay, it might be a little awkward, but it would at least clear things up and there wouldn’t be such mystery surrounding when they’re done with the relationship.

We’ve all been in a situation where our partner doesn’t seem as committed as they once were and we’re staring at a bunch of random puzzle pieces, trying to figure out where they fit. It would be so much easier if our boyfriend would tell us that he wants to break up, but things don’t always work out that way. Instead, we have to play detective with the behavior that he’s exhibiting. That’s why we have to look to zodiac signs and get some help.

An Aquarius Guy Will Shut Down And Stop Talking To You

f he’s an Aquarius, he’s said to be someone who “Runs from emotional expression” and so you’ll notice him acting strangely when he shuts down and stops talking to you. Suddenly, date nights are spent with you staring at him in silence, and he’s not texting you the way that he normally does.

According to Paired Life, “Aquarius is one of the most independent and progressive signs. It is the most likely to stick to being single, just after Virgo.”

It’s tough to date someone who is that self-sufficient and doesn’t want to come to you when something is up, so this might be for the best.

Pisces Will Get Too Serious Too Soon Then Back Off

“Fearful, overly trusting, sad” are some words that describe a Pisces sign. When he’s not interested in you anymore, he’s going to seem like he’s acting differently than he has been this entire time.

While at first he got serious with you because he’s a sensitive sign who trusts people, he’s going to totally back off once he realizes that he wants to leave the relationship.

It seems like a Pisces guy will give too much in the relationship and that will end up breaking you two up, which definitely sucks.

, “Pisces are loving and generous. If they aren’t careful they will take care of all their friends before they take care of themselves.”

20Aries Will Make All The Moves Then Get Bored

The average Aries is described as “impatient, moody,” so when he’s not interested in you anymore, he’s going to make a bunch of moves on you and then get super bored.

This won’t be pleasant since you’ll be left confused and wondering why he was so into you only to then start treating you so badly.

According to Astrology Answers, “Most Rams feel trapped in routines and sameness. Let them have enough freedom and independence in your relationship to do things on their own.”

It can definitely be tricky if you like leaning on your partner all the time and you don’t want a ton of time apart.

Taurus signs aren’t fans of “Sudden changes, complications, insecurity of any kind” and so if your Taurus boyfriend isn’t interested in you anymore, he might say that you like someone else.

He feels insecure and so he might become unfairly upset that you have some guy friends or that you’ve been getting along with some of his pals.

You’re going to wish that your boyfriend would come to you with his problems, but that’s not in his nature.

According to Love To Know, “He can be very stubborn and might refuse to have a detailed conversation about an issue, instead preferring to show that he’s upset by shouting or acting annoyed and indifferent.”

Gemini Guys Will Start Flirting With Other People

“Inquisitive and always ready to flirt” is how Gemini signs are described. That’s not really what you hear about the person that you’re in a serious relationship with…

When you see him flirting with other people, that could be the sign that he’s not interested in being with you anymore.

i.thehoroscope.co explains about guys who fall under the Gemini sign, “He’s a busy man so prepare to catch just a glimpse of him when you both have time. Be patient with him as he always has many projects going on in his life. He is more suited for long-distance relationship and not for something that requires his full-time attention.”

Your Cancer BF Will Get Offended

Before dating someone who is a Cancer sign, it’s a good idea to realize that he’s going to be sensitive. As they are described, they are “Deeply intuitive and sentimental, Cancer can be one of the most challenging zodiac signs to get to know. They are very emotional and sensitive”

You’ll notice that your boyfriend becomes overly sensitive when he’s not interested in you anymore.

Some people are tough but have a softer side once you get to know them and start breaking down those walls. For the guy who is a Cancer sign, his soft side is actually his entire personality, which explains why he could get overly sensitive and break up with you.

When your Leo boyfriend gets really upset with you and you notice that he’s not backing down, that’s the sign that he’s not interested in you anymore. This is how he’s going to react.

“Leo is very jealous and possessive. He must always come first in your life, even before your children. He might not want to share you with the demands of your career.”

It’s frustrating when someone won’t see your side of the story or listen to your perspective, so you two might not be great together.

Virgo Guys Will Be Too Nervous To Make A Real Commitment

Virgos are described as having some negative traits that include “shyness, worry, overly critical of themselves and others.”

When you start to date a guy who is a Virgo sign, he could get super nervous and be unable to make a real commitment to you. He would, unfortunately, let his shy personality get in the way.

Elite Daily explains, “If you are the clingy type, you might want to think twice about dating a Virgo.” The publication goes on to say, “Because of their dedication and reserved nature, they need a lot of time to themselves, usually doing something productive.”

Opposites attract but you might find that you’re not well-matched with a Virgo.

Libra Will Get Mad And Then Ignore You

Libras will “avoids confrontations, will carry a grudge” and that’s not the best thing to happen during a relationship. Conflict is going to come up and you’re going to want to talk things through.

When a Libra doesn’t want to date you anymore, he could get mad about something (whether big or small and meaningless) and then just refuse to talk to you about it.

It helps to figure out why your boyfriend is acting this way, and it’s definitely because of his zodiac sign.

Thought Catalog explains, “Libras can also be incredibly hard on themselves. The best advice you can give your Libra is to not judge themselves more harshly than they would judge one of their dear friends.”

Scorpio Stops Contacting You As Much, Confusing You

Scorpios are said to be “Distrusting, jealous, secretive” and that means that when they don’t want to date you, they’re going to stop contacting you. And it’s definitely going to be confusing.

When you’re seeing someone who is a Scorpio, he might think that you’re not reciprocating his feelings because he can get very intense about a relationship.

Paired Life says, “If after a few dates you really aren’t feeling it, please don’t lead this guy on. A Scorpio man appreciates honesty so if you know you aren’t going to date him seriously, let him know as soon as possible. It’s never a good idea to lead him on.”

The Sagittarius Wants To Travel Or Change His Life

“Sagittarius is extrovert, optimistic and enthusiastic, and likes changes” so if your boyfriend isn’t interested in you anymore, he’s going to say that he wants to go on a big trip. Or he could start talking about the changes that he wants to make in his life.

You would prefer that he come out and say that he doesn’t want to date you, but that’s not how his personality is.

“Although friendly, he’s not overly attached to people and he is happy to go on his adventures alone.”

This explains why your BF won’t want you to go along with the lifestyle changes that he’s making or invite you on a vacation. He’s interested in becoming more independent.

Your Capricorn Boyfriend Doesn’t Want To Have Deep Talks

What about when you’re dating someone who is a Capricorn? This zodiac sign is described as having trouble talking about important things: “Shown sensitivity comes through acts rather than words, and years are often needed for them to open enough to chat about their actual emotional problems.”

That means that he doesn’t want to have deep talks, and he’s going to start getting pretty quiet around you.

explains that talking to a Capricorn sign about talking about his emotions isn’t going to work: “You’ll have a long wait before he says ‘I love you.’”

While this does explain why he would treat you like this, you definitely wish that he could just sit you down and break up with you. It’s tough to play detective, but this will be for the best in the end.