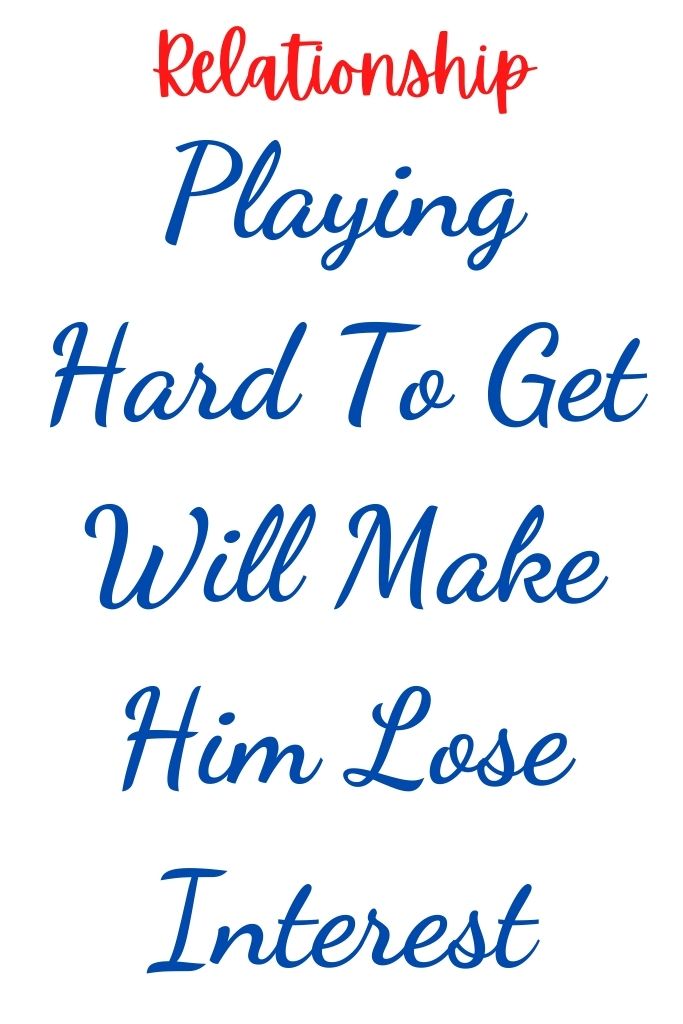 While some men may fall for the girls who constantly play hard to get with them, the majority will find it confusing or even repulsive.

If you are trying to attract a man by playing hard to get, you have to be aware that maybe he’s not the right guy for you.

It all depends on what you’re looking for at the moment. Are you looking for a casual romance or do you want to attract someone who’s a keeper?

If you think that he may be a keeper, you should think twice about playing your hard-to-get game with him.

Real men don’t like mind games and if you are too into playing hard to get, they will lose interest and you certainly don’t want that to happen.

Here are 5 reasons why playing hard to get will make him lose interest.

It is totally normal not to be interested in someone if that someone is not interested in you. If he knows what he wants, he will expect the same from you.

If he’s been showing you his affection for weeks or months and you’re still playing hard to get, he will definitely lose interest.

I mean, who wouldn’t?

He will say to himself: Okay, I’ve tried everything but she still doesn’t like me. I guess it’s high time I leave. Don’t let that happen.

If he is unselfishly fighting for you and constantly letting you know how much he likes you, give him feedback.

With playing hard to get, you’re telling him that his efforts are in vain and that he will never succeed in making you change your mind.

Playing hard to get is some kind of a mind game and you should be careful with whom you are playing it. Exhausting mind games are the biggest turn-off for any guy.

So, if you really have to show that you’re hard to get, you should do it more subtly. Don’t let him lose interest by manipulating him.

If he senses that you’re the kind of girl who likes to play mini mind games , he will immediately run away from you.

If there’s something men are afraid of, it is playing with their mind.

He’ll think that you don’t know what you want.

You’ll send him mixed feelings if one minute you play hard to get and the next you’re the opposite.

And God knows someday you’ll have to stop playing hard to get with him if you really like him.

So, if you really like him, don’t be afraid to show him. He will simply fall to his knees because he’ll see how confident you are.

If he senses that you don’t know what you want, it will make him lose interest.

The best way is to always tell the truth and if he’s the one for you, he will be more than happy to hear it. There’s no need to complicate things.

He’ll think that you’re not serious.

If you think that he’s the one and he happens to be looking for something serious, do not play hard to get with him.

If you do, you’ll appear as someone who is looking for a casual romance instead of the real thing.

Because of that, he may lose interest and keep searching for someone who is more serious in terms of a love life.

If you want to keep him, tell him subtly: Hey, I’m here and I’m sick of playing mind games. I’m ready to be with you . I’m ready for love.

It will make his day and he’ll thank God for creating such a beautiful woman from the inside out.

You attract what you put out.

Whatever you decide to do, remember that you attract what you put out. If you play hard to get, you will most likely attract emotionally unavailable men.

They are always after someone who seems hard to get because they’re not interested in those who show them love and appreciation.

Emotionally unavailable men are more likely to become too possessive once they have you.

They are a real burden and you should stay away from them.

Don’t play hard to get if you want a good man to stay.

Just follow your heart and I’m sure you’ll find other ways to keep him interested and make his heart beat faster.