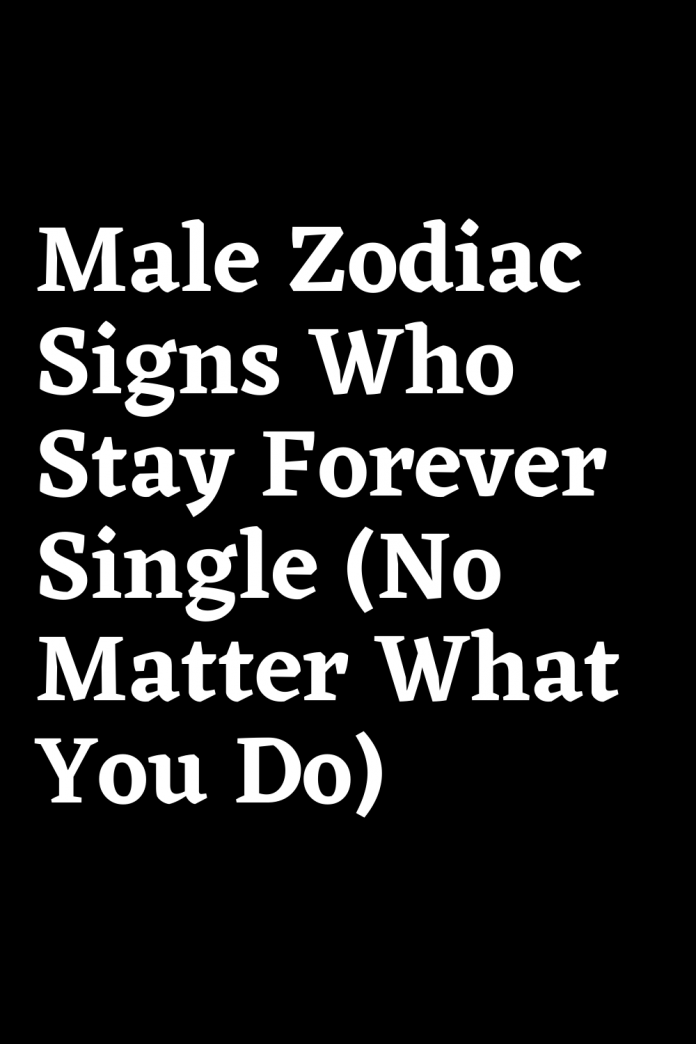 He wants a girlfriend by his side that people will be impressed by.

He is never satisfied with his choice because he feels he can always do better. Aries men aren’t looking for someone equal to them.

They are looking for a girl way better, which leads them to remain alone.

The girlfriends he had before he abandoned because according to him they weren’t good enough.

After he loses someone, he realizes that she was a great girl for him but by then it’s too late.

Taurus needs some time to open up to their partner. But their biggest fault while in a relationship is they refuse to compromise.

They feel they are always right and everything has to be their way or the highway.

He doesn’t want to change his perspective and it’s exhausting dating a person like him.

But even if he ends up forever single, he won’t regret anything because he knows he was consistent in his decisions.

A Gemini man is untamable. He is a real party animal and because of that, no one takes him seriously.

He can get any woman’s attention very easily but after she gets to know him just a bit more, she sees he is only after hook-ups and one-night stands.

Sure, Gemini men are not like this all the time.

They have their moments when they think about long-term relationships and how it would be nice to try that for a change but that lasts only until he goes off to another party.

He shuts down the future right from the start. Cancer men are extremely sensitive and they have a hard time reconciling with the fact their relationship is over.

They usually have strong feelings for their ex long after the relationship ended.

That’s how they pull themselves down and stay stuck in their past, unable to move forward, waiting for closure which might never come.

Leo men can’t stand anyone stealing their spotlight. The reason they are forever single is that they refuse to share attention directed at them.

They refuse to accept the fact that someone might be ‘more important’ than them. No woman wants to put up with that.

We all want to shine at some point in our life and if you have a man by your side who is jealous about the extra attention you’re getting, you’re probably going to move on and he will remain forever single.

A Virgo man’s standards are way too high. He looks at every little thing that might be wrong.

He looks at every flaw as if it were a deal-breaker. That’s why he can never find the person who suits him.

But there is a reason why he acts like that. He is afraid of rejection, so he makes up a reason to be the one who rejects and not the one getting rejected.

A Libran man will most probably end up in an awful relationship because he doesn’t know how to reject someone.

He will always say yes because he’s too good of a person to hurt someone by saying no.

So it’s better for him and everyone else if he stays single, so he doesn’t get a chance to hurt someone by being in a dead-end relationship.

The passionate Scorpio takes things too fast and that’s usually what intimidates every woman at the beginning of a relationship.

He doesn’t know how to take things slow and he will probably discuss children and marriage on your first date.

Due to his approach, he scares women away and sadly, stays forever single.

A Sag man doesn’t want to be tied down to one place and one person.

He wants to be free to travel and go wherever he wants without anyone’s permission.

That’s why he doesn’t commit because he’s afraid the commitment will imprison him, making him unable to do the things he wants and loves.

Most Sag men are emotionally immature and can’t stand the idea of asking for someone’s permission or making any kind of a compromise.

Capricorn men are all about work. They won’t date or think of starting a family if they don’t have the financial support to do so.

They will work their butt off to make sure they have a nice life ahead.

Only then are they going to consider dating and being in an actual relationship.

Since this dream is not easy to achieve and it takes some time, most Capricorn men stay forever single.

His mind is all over the place and when he is talking to someone, he almost doesn’t listen at all.

He is only focused on what he has to say, which is really disrespectful to others. Complete chaos rules in his head and he himself doesn’t know what he wants.

He gets easily distracted and he is always preoccupied with someone else’s problems, so he has no time to work on his own issues.

He is dead scared of getting hurt. He is too sensitive and he instantly opens up and trusts the person he likes.

This usually backfires and he ends up getting hurt, so he rather chooses to stay single than going through the pain of heartbreak once again.

He’d choose to be single over risking getting hurt every single time.