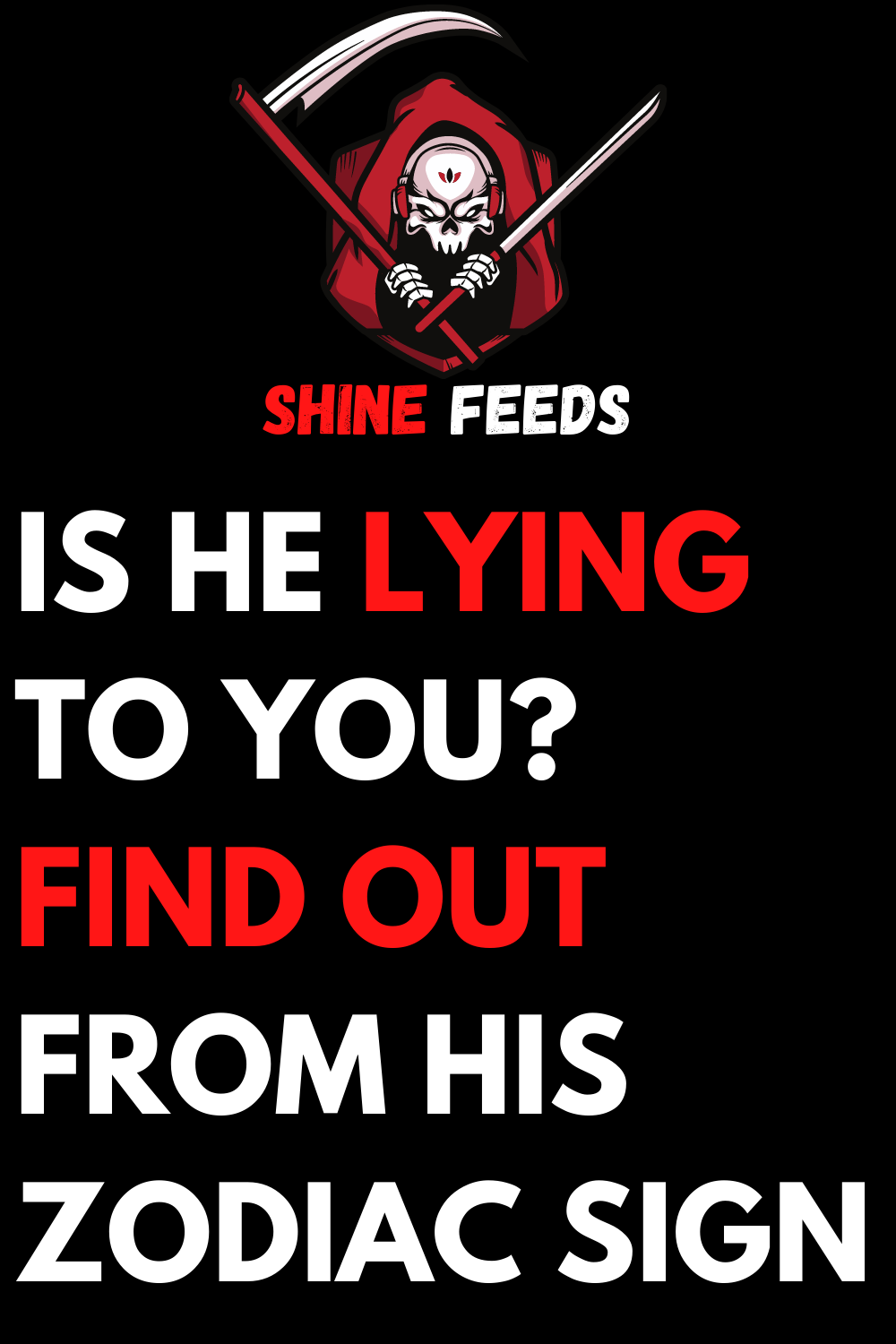 IS HE LYING TO YOU? FIND OUT FROM HIS ZODIAC SIGN

Find out if you are dealing with someone who is used to telling lies or if you can rest easy and trust what you are told.

When dealing with others, one of the key elements for positive relationships is mutual trust. This is true both in couple relationships and in long-term friendships and, obviously, in common interpersonal relationships. These days, however, trusting others is increasingly difficult, especially if you think about the betrayals suffered over the years and by the very people in whom you had placed your trust. How then? The truth is that sooner or later, trusting someone becomes indispensable.

And to do this, you need to try to get to know who you are in front of, partially follow your instinct, and make a real leap of faith. In order not to grope totally in the dark, however, you can also rely on the zodiac sign of the person with whom you are dealing. The influence that the stars have on each of us determines the tendency to tell lies. This obviously also depends on many other factors but thanks to astrology can be determined at least in part. So let’s find out which are the zodiac signs most likely to lie and which ones you can trust instead.

Aries – Probably, now and then
Those born under the zodiac sign of Aries are not really born liars. Basically, though, they always try to make things work in their favor. And if to do so they have to omit some details or enrich some stories, there is no problem. But they are almost always small lies and they don’t even tell that often. In fact, they generally prefer not to have to worry about remembering what they said or not. It must be said, however, that being people who always put themselves first, they will always act for their own benefit. While trusting what they say, therefore, it is always better to remain alert.

Taurus – If it is necessary
It cannot be said that the natives of the astrological sign of Taurus love to lie. If necessary, however, they do not back down. And, once a first lie has been told, they don’t struggle to make new ones to hide or support the first one. It must be said that they are not that good at telling story after story. This is why, when the lie gets big, discovering them is pretty easy. Their tendency is in fact to get lost in the details, confuse dates or situations and become self-conscious enough to raise doubts about what they are saying. A good way to discover and unmask them.

Gemini – If they are bored
Those born under the zodiac sign of Gemini are people with great imagination and a real aversion to anything that causes them boredom. For this reason, they can go so far as to change the facts if they think that doing so can make their reality more fun. Of course, that’s not why you would expect to get a lie but it’s the way they do it. For this reason, you may have to expect lies from them. Lies are usually for good and not designed for ulterior motives or to hurt. This is why, more often than not, you can even forgive them. Provided, of course, they are not covering up some superficial wrongdoing. Something that does not happen often but that can happen now and then with them.

Cancer – Often, especially if they need it
The natives of the astrological sign of Cancer are people who love to live a pleasant life. For this to happen they must feel confident in themselves and their world. And if to do so they find themselves having to tell a few lies, they don’t have any problems whatsoever. They are generally not used to deceive others. However, these are people who are capable of changing reality. Especially when they are in the middle. Trusting them, therefore, depends on many different factors which must be taken into account. And all keeping in mind that, beyond the relationship that one has, if they feel the need to do so, the natives of the sign will not hesitate to change the reality of things.

Leo – Not exactly
Those born under the zodiac sign of Leo are people who always avoid lying if they can. A choice they make more for convenience than for sincerity. Having said that, if they think that something needs to be said in a given way, they do it without getting too upset and looking for the right words to convince others. However, it is a way of doing things that comes so naturally to them that they cannot properly define it as a lie but rather embellish reality to make it more comfortable for them. Having said that, being careful about how they pose is always important but without too many thoughts. Generally, if they have something to say they usually do it.

Virgo – Unconventional
The natives of the Virgo zodiac sign are not among the people who love to lie. First of all, because they do not always remember what they said and immediately afterward because they claim to be accepted by others for who they are. This is why lying is just a big waste of time for them. It must be said, however, that when they realize they have done something wrong they are very good at hiding it. And they do it by showing themselves as genuine as possible. So much so that, even if discovered, they will laugh at us. An aspect to which it is better to pay attention because even if they do not always realize it, in this way they can come to hurt others.

Libra – Now and then
Those born under the zodiac sign of Libra are people who do not like to lie and who feel uncomfortable if they do so. For this reason, they can generally be trusted and even though they are rather reserved and therefore unwilling to talk about themselves. Of course, sometimes they too can say something different from reality. And typically, these are small changes that do almost more for themselves than to deceive others. Changes of which they are the first to convince themselves to see things as they like. Basically, therefore, they can almost always be trusted.

Scorpio – Only if necessary
The natives of the zodiac sign of Scorpio, if they want to know how to pack lies like a work of art. Fortunately, that’s not something they love to do. And this leads them to be the most sincere people. When they see no other way out or are at war with someone, however, they can go so far as to lie without feeling the slightest sense of guilt. And a lie told by them will always be so well constructed that it can rarely be exposed. If it comes to trust, then, a lot depends on the type of relationship you have with them. As long as everything goes well, in fact, they will always try to be as sincere as possible. Another story if you have a conflictual relationship with them.

Sagittarius – Maybe
Those born under the Sagittarius zodiac sign are people who think a lot about themselves. This means that if they believe that a lie can be useful to them, they do not hesitate to tell it. They’re always being direct, however, leads them to betray themselves quite frequently. And this means that they almost always end up betraying themselves. Although you cannot rely on their sincerity very much, you can therefore rely on the fact that sooner or later they will make a false step and that because of this, any lie is not destined to have a long life. Small consolation if absolute sincerity is expected from them. But definitely, a plus if what matters most is to understand if and when they are lying.

Capricorn – Most likely the
natives of the astrological sign of Capricorn are people with a great need to alter reality to make it as suitable for them as possible. For this reason, they almost always find themselves lying. Which they do first of all with themselves and then with others as well. An aspect that with them it is always good to keep in mind because the lies they tell can range from the smallest omissions to the harmless ones and up to the largest ones. All in an intertwining that is not always easy to understand. Being on guard is, therefore, more than recommendable.

Aquarius – Very often
Those born under the zodiac sign of Aquarius don’t mind telling lies. Especially if these can come in handy to get what they need. They generally don’t even make big distinctions between people they have a particular bond with and everyone else. This is why, when it comes to them it is always good to be careful and avoid immediately believing what they say. Better to evaluate each expression that comes as strange. On most occasions, it will be discovered that there was probably a lie underneath.

Pisces – Hardly ever
Although if needed they would be quite capable of telling a lie without getting caught, the natives of the zodiac sign of Pisces tend to never lie. This depends in part on their being sincere and in part on the desire not to know that they never have anything to hide from others. They are in fact transparent people who love to be able to always feel at peace with themselves. Therefore, you can definitely trust them. It goes without saying that sincerity must always be mutual. In fact, if the relationship of trust fails, the natives of the sign can also change the register. And as mentioned, if they get into it, they turn out to be quite adept at lying.