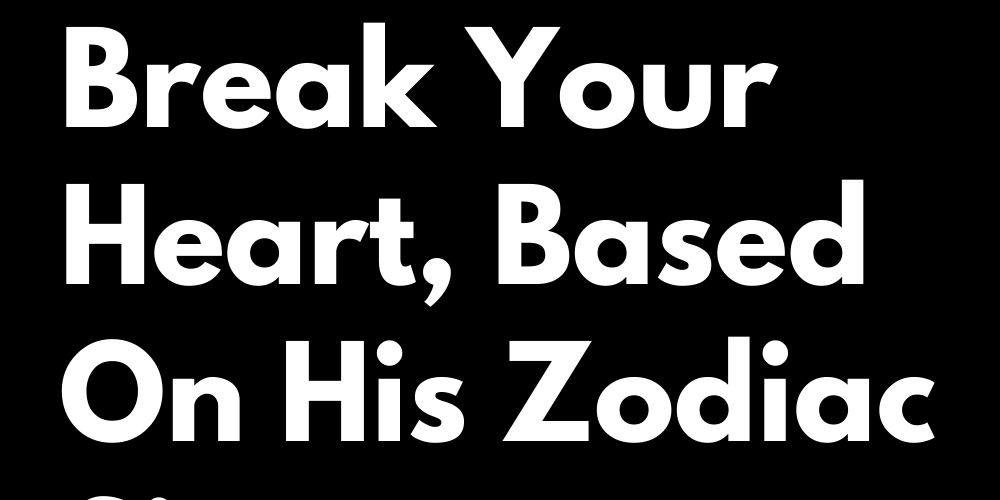 How Will He Break Your Heart, Based On His Zodiac Sign

We have all been heartbroken before, at least once in our lifetime.

If you have had this painful experience, you know that afterwards you feel completely emptied and destroyed.

I wouldn’t wish anyone to be heartbroken, not even my worst enemy.

This is something that I once experienced in my flesh and that I never want to feel again.

But have you ever wondered why your partner broke your heart?

Does it have something to do with astrology or the position of the planets? There is a good chance.

In fact, astrologers have even found out how a man will break your heart, based on his astrological sign.

If you want to learn more, read on.

This sign is relatively cruel when it’s about to break your heart. He’ll do things real quick, because he won’t want anything to do with you anymore.

He’s a hunter, and he’s probably already looking for a new victim. If you try to talk to him and work things out, he’ll just ignore you.

Once he ends a relationship, he never goes back.

The major characteristic of a man born under this sign is self-centeredness.

Being in a relationship with such a man is exhausting, because he deals with his feelings but doesn’t care about yours. So, if he leaves you, consider yourself lucky.

Even though you’re heartbroken now, you’ve saved yourself a fair amount of tears and a life with a jerk.

Gemini is the opposite of the heartbreaker Aries. He will do things slowly, which will be all the more painful.

But in truth, he is not sure of his decision and he will try to get your opinion and discuss so that eventually you get back together.

A Gemini will bombard you with calls and messages, asking you 100 times if you are sure of your decision.

And even if he doesn’t feel good when he’s with you, even if he’s devastated that he lost you, he’ll never admit it in public.

This sign is the most emotional of the zodiac. Therefore, it is very difficult for him to end a relationship.

He’s not good at that sort of thing, and the hardest part will be seeing him so devastated.

He will be so sad that he will want you to be his shoulder to cry on and it will be very difficult since you will already have broken up.

In case you have broken up, run away as fast as possible or you will have to watch him, every day cry over his plight.

His motto in love is: “fight fire with fire! ”Which means that he will move from one relationship to another.

He likes to break up in front of as many people as possible, so be sure that he will do it in front of your friends.

He likes to be in the spotlight and when he breaks that way, it means you made a mistake that caused him to implode.

Don’t be fooled, because you haven’t done anything wrong.

Your man just wanted to quit, so that he was dating a chick who was already in your relationship without you knowing it.

A man born under this zodiac sign is so focused on his career that he will end up neglecting you.

I know that men who are crazy about their work are very interesting, but you have to know how to divide things between work and those close to you.

So, unless you are his job, don’t expect him to pay you much attention.

You will end up being the one to leave him, because he will never be able to give you the attention and love that you need.

A Libra man doesn’t really want to break your heart, but he is so prone to over-analysis and overthinking that relationships with him always end in a chaotic way.

His emotions are like a roller coaster and he doesn’t know what he wants. If it lasts too long, it can be exhausting.

The great thing about a Libra man is that you can always count on him, even if you break up.

At the end of the day, some people aren’t meant to be a couple, but rather to be friends.

When a Scorpio man breaks your heart, he will get really mean. He hurts others with his words, his loved ones included.

So don’t be surprised if a Scorpio tells you that you don’t deserve anything and that they can have all the girls they want.

He actually thinks he can afford to have sides, while you have to be totally dedicated to him.

If you show him that it does not suit you, he will go away but before doing so, he will hurt you so much with his words, that he will break your heart in a thousand pieces.

That sign is truly a devious bastard. Do you know what he’s doing?

While having a good time with you, he will also flirt with other girls, just to see which one could be a potential friend.

He’ll break your heart and leave you and you won’t even see him coming. He will leave you without any explanation and never realize he made mistakes.

So, expect him to spend one night with you, and the next with another. He’s bad to the core and the qualifier “bastard” fits him like a glove.

The worst part about a Capricorn is that they probably still think about their ex. He quickly got together with you, because he didn’t want to be alone.

When he kisses you he probably still thinks of her and that is without a doubt the worst way to break your heart.

So if you learn such a thing, don’t let it get away so easily.

Make him pay for his sins, just to get some satisfaction out of it and be ready for someone else who can treat you better.

This man will break your heart the old fashioned way – he will cheat on you. And despite all your accusations, he’ll try to convince you that he hasn’t done anything wrong.

Remember, he’s a great player and doesn’t really care about your feelings.

He just wants to have a good time and if you want to close your eyes to his infidelities, you are free to take part in his comedy.

I just hope you aren’t crazy enough to let him do such a thing to you.

At the end of the day, he’s just one man and there are so many more engaging opportunities …

A Pisces man will feel extremely bad about hurting you, but the thing is, his own feelings will always be more important to him than yours.

Once you tell him that something is wrong with your relationship, he will leave you. He just doesn’t want to spend his time helping someone who is already broken.

That’s why he’ll just turn the page and find another girl he can easily bamboozle. 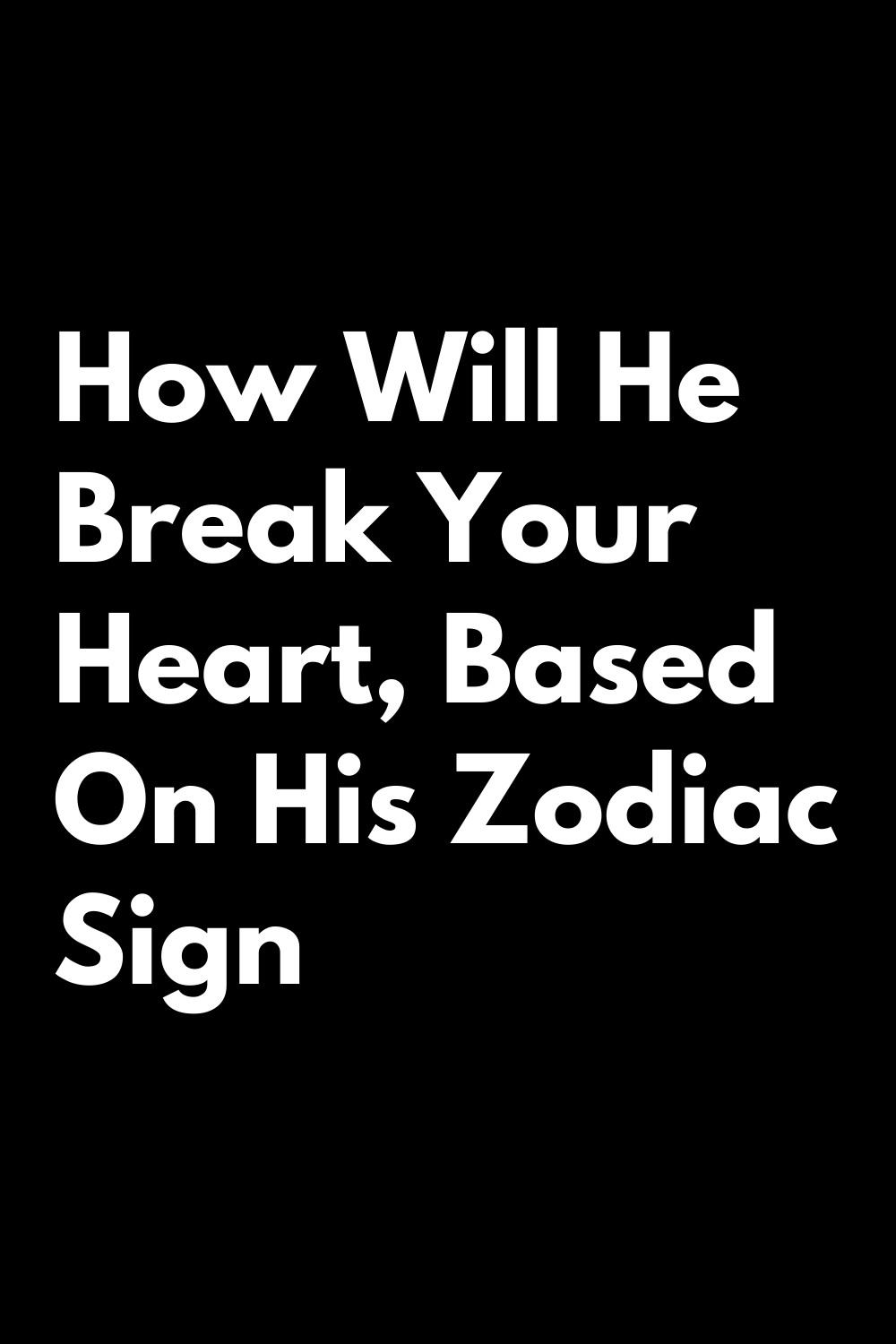