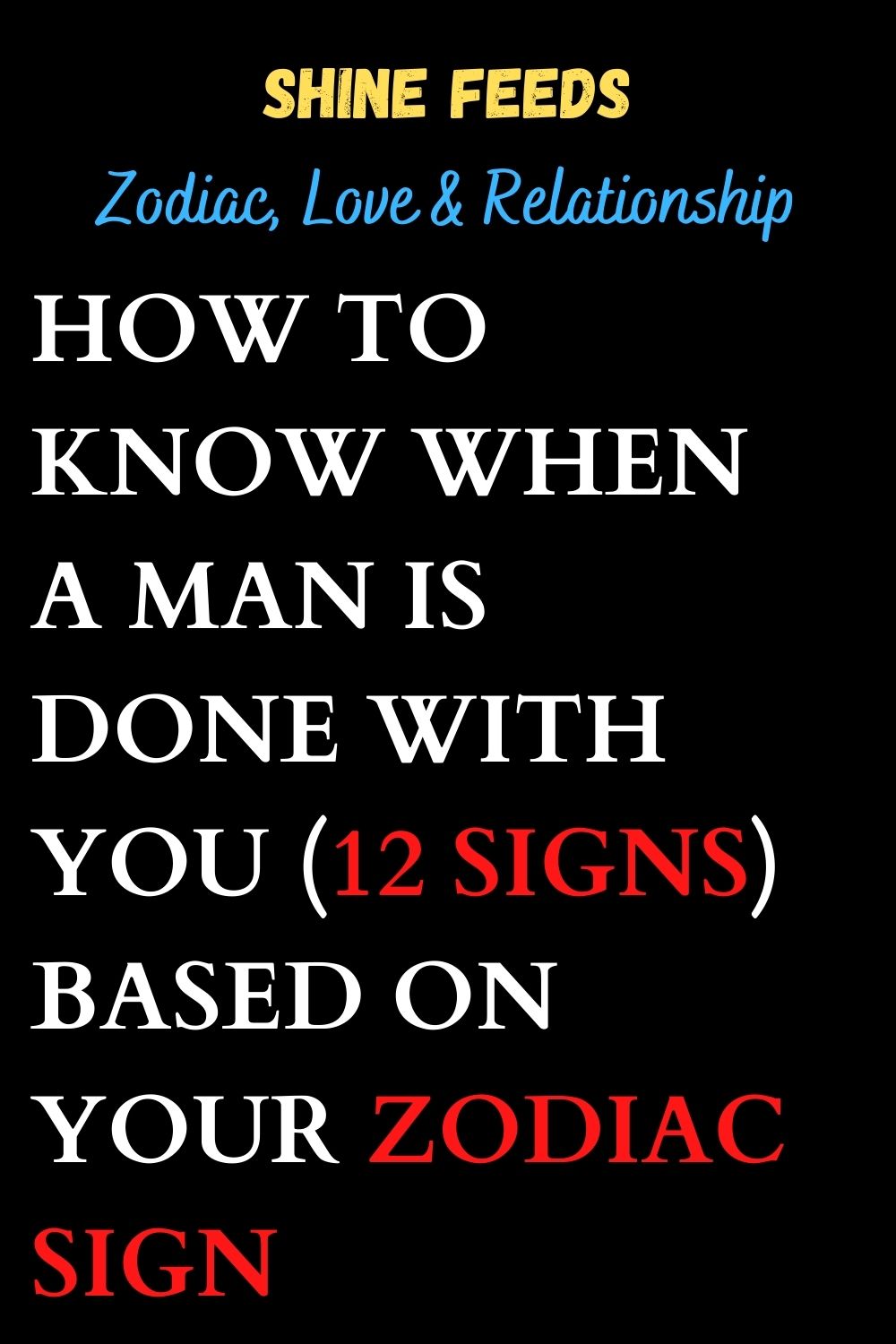 Do you feel like your Capricorn guy is pulling away from you? Is your gut telling you that something’s off in your relationship? If you want to know when a Capricorn man is done with you for good, stay with us.

This Saturn-ruled sign is the most mature and assertive zodiac sign. Capricorn is known as “horoscope daddy” or “the zodiac boss.”

However, as much as their ambition is a good thing, it can also have a negative impact on their personal and love life.Hot horoscope

5 Ways To Seduce A Capricorn Man

Capricorn men tend to put their work and career above everything else, and it’s most likely their worst personality trait.

Their stubbornness is another one of their negative personality traits. If they put their mind to something, you won’t make them change it easily.

That’s why it’s sometimes almost impossible for them to reach a compromise with their partner.

Even though they’re difficult to analyze in some spheres of their lives, it’s not that difficult to predict and know what a Capricorn wants when it comes to their love life.

A Capricorn man is brutally honest, and he appreciates honesty more than anything else, especially from their romantic partner. He’s the type of guy who’ll be direct and tell you the truth no matter how ugly it is.

When a Capricorn man is done with you for good

Even though Capricorn men are very good at communicating their feelings, it might be difficult for them to admit to their partners that they’ve stopped loving them.

They might first drop some hints to their partners and start to pull away slowly to warn them about the impending breakup.

Below are a few clear signs that will help you understand when a Capricorn man is done with you for good.

Just like a Sagittarius or Cancer man (or any other male zodiac sign), a Capricorn will also become cold when he’s about to finish things with you.

His distant behavior and pulling away are among the first red flags that he wants to break up with you. Somehow, it’s how he wants to warn you that his feelings have changed.

As soon as you notice that he’s slowly pulling away, you should try to talk about it with him. Even if he’s totally ignoring you, don’t worry because it’s not definite that he doesn’t want you anymore.

I think it’s so much easier to accept when someone doesn’t love you or that someone even hates you than deal with this awful emotion called indifference. I’m not quite sure if I should even call it an emotion?

Your Cap man is probably thinking about how his indifference will help you move on faster. He probably isn’t aware that it’s hurting you so much.

Even if he has stopped loving you, it doesn’t mean that he doesn’t still care about you or that he wants to hurt you.

He does care, and that’s exactly why he’s behaving this way. He thinks it’ll make things easier for you.

He gives you the silent treatment for no reason

When you notice that your Cap guy is slowly pulling away, it doesn’t mean that he wants to finish things with you. Maybe he has other problems, or he just needs time to rethink your relationship.

However, if he’s ignoring you completely, it’s a huge red flag that he wants to break up with you. He’s giving you the silent treatment because he wants to warn you.

He might be doing this because he wants to make you break up with him first. Yes, a Capricorn male can be pretty cunning too.

Along with Geminis, Capricorns are known as the most hard-working zodiac signs. They’re true workaholics, and you have to be prepared that it’ll make your relationship suffer sometimes.

They have clear goals for the future, and they’re constantly working on achieving them. However, we all know that when someone wants to make time for you, they’ll do it even when their schedule is hectic.

His job didn’t prevent him from seeing you before, so what’s happening now? Unfortunately, I have to be honest and tell you that he’s just using his job as an excuse.

The bottom line is that your Cap man is using this excuse because he doesn’t want to lead you on anymore, but at the same time, he doesn’t feel quite ready to tell you that he’s done with you.

All of a sudden, you stopped being his priority

Even though Capricorns are workaholics and their job is always their priority, they know how to sort out their priorities when they fall in love with someone.

He’ll put you on the very top of his priority pyramid. He knows how important his career is, but he also knows that the person he loves must always come first.

It’s just like the relationship astrologer, Anna Kovach, says, “Just know that if he starts canceling on you or making other plans when he’s supposed to have plans with you, this is one sign he’s giving you that his interest in you has left the building.”

He doesn’t try to impress you anymore

At the beginning of your relationship, he showered you with attention. He would send you a romantic message or just a simple “I miss you” text in the middle of the day, for no reason.

I know it’s difficult to accept that all of this is gone now. The fact is that when a Capricorn man likes you, he’ll show it but also, when he stops being in love with you, he’ll be direct about it too.

He criticizes everything you do

I know that being criticized by someone you love is the most awful feeling in the world. It can awaken such insecurities in a person that it becomes almost impossible to get rid of them.

He makes you think that no matter what you do, you weren’t, aren’t, and will never be good for him, and that’s the worst thing a man can do to a woman who’s truly and deeply in love with him.

Capricorn males are incredibly passionate lovers. If they start avoiding physical intimacy, it’s a pretty obvious sign a Capricorn man is done with you.

He has become incredibly selfish

Okay, the fact is that Cappies can be pretty selfish. They’re extremely ambitious, and sometimes they’ll do anything to achieve what they want.

However, they’ll never be selfish with a woman they love. They’re aware that it can hurt them, and that’s the last thing they want to do.

Unfortunately, if your Cappy has become very selfish, it’s a clear sign that he doesn’t care for you anymore. He obviously doesn’t care how it’ll make you feel.

He has changed… A lot!

To be honest, we all change a little bit throughout life. Actually, life makes us all change. However, if we decide to change completely, it’s probably because we want to turn the page in our lives.

This is exactly what’s happening with your Cap man. He’s changed because he’s closing the chapter on you completely, and he’s turning a new page in his book called ‘life.’

If he says that it’s over, trust him

Once again, I have to say that Cap men are very good at communicating their feelings and being honest and direct. If he wants to break up with you, he’ll probably tell you so himself.

I know that you might think it’s surely not a definite decision, but I would advise you to accept it because

Capricorns don’t say anything before thinking it through. If your Cap guy tells you that he has decided to break up with you, it’s because he’s completely sure about that decision.

I couldn’t agree more with these words from the relationship astrologer, Anna Kovach, “His honesty can seem painful, but it’s better than him pretending to be something he knows he isn’t with you anymore. He’d rather tell you and let you grieve the loss of him than lead you on.”

Your instincts are telling you that it’s over

I know that it’s difficult to accept that your relationship is coming to an end, especially because your Cap man has convinced you that you’re his dream girl and that you’d be together forever.

Still, the best thing you can do is to come to terms with the facts, start the healing process, and move on as fast as you can.

Sometimes you need to trust your gut, and if it’s telling you that something is off in your relationship, it’s most likely because there’s definitely something wrong.

Don’t try to quiet that inner voice that’s telling you something’s wrong because you may regret it later.

The fact is that settling down never comes easy for a Cap man. Before he takes that serious step, he’ll want to make sure that he’s doing it with the right person.

I think that it’s important to say that when it comes to love compatibility, Cappy and Virgo make one of the best couples of the zodiac.

These two make one of the most harmonious zodiac combinations and are true soulmates of the zodiac.

They’re also compatible with another Earth sign, Taurus, passionate Scorpio, and romantic Pisces. On the other hand, Capricorn men are the least compatible with impatient Aries and indecisive Libras.

It’s not hard to tell when a Capricorn man is done with you. He will rarely allow his woman to wonder where their relationship is going or about their compatibility as a couple.

The thing I appreciate most about Cap guys is that they’re very honest with their feelings.

They don’t like to create drama over anything, and they’ll probably talk to you and tell you directly and honestly when it’s over.

However, sometimes they need time to end things with someone, as we all do actually. It’s not easy to tell someone that you’re breaking up with them, especially if you’ve been in a long-term relationship.

A Cappy will start by giving you a few signs that he’s breaking up with you before he does it. I listed those signs here to help you prepare for what’s going to happen.

Of course, if you notice any of these signs that your Cap man is slowly pulling away from you, there are many effective ways for you to reel him back in and keep him in your life.