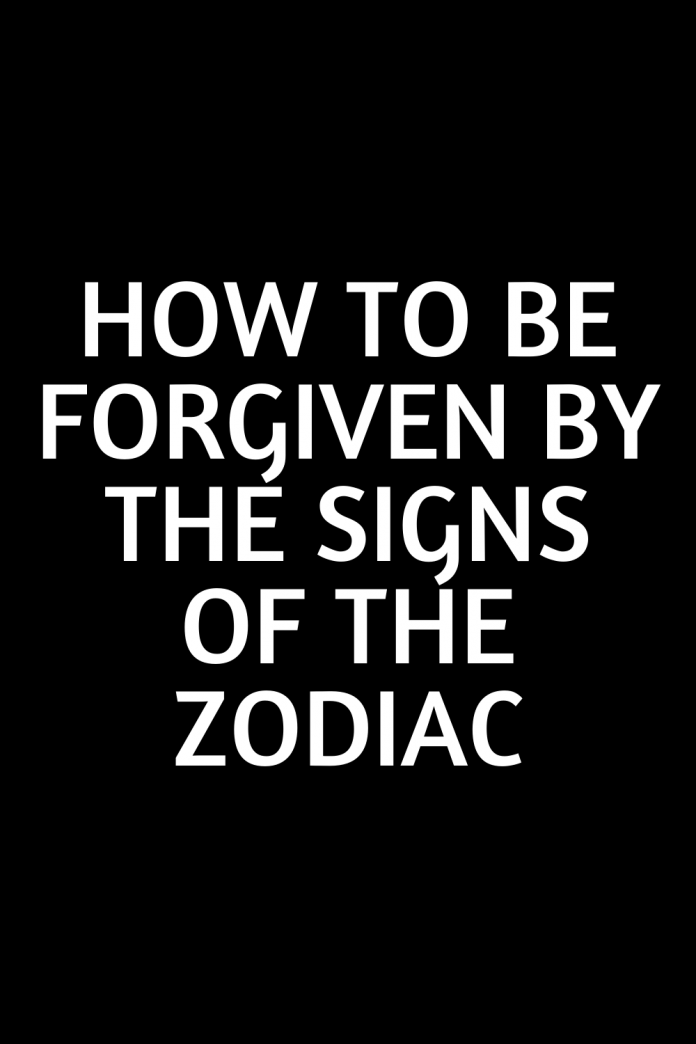 Find out the right move to make to get forgiven by the signs of the zodiac.

When it comes to pissing someone off, often the hardest thing is to find a way to fix it. If sometimes it is enough to explain oneself or to let time pass before offering one’s apologies, other times the right move to make is not so obvious and the risk is to complicate things rather than improve them. This is partly because people are all different and that what works for one may not be good for another.

At the same time, more complex mechanisms are triggered such as the existing harmony, the compatibility of character, and the temperament of the person with whom one is dealing. Fortunately, the stars can help us figure out which move to take to improve the situation. Today, therefore, after having seen what makes us too emotional based on the zodiac sign and what is the part of us that we should always preserve, we will discover how to be forgiven by the various signs of the zodiac.
Since this is a situation in which the emotional part also comes into play, the advice is to also check the profile of the ascendant of the person from whom you want to be forgiven.

The move to make to make every zodiac sign forgive you

Aries – Passing Time
Those born under the sign of Aries are people who tend to spark with little. So one word too many or one wrong gesture will be enough to see them go on a rampage. Unfortunately, when such a thing happened, trying to intervene at the moment can be counterproductive because every word will only make them angrier. Much better to remain silent and wait for the anger to wear off. It generally doesn’t take long and when they appear calmer, just apologize for immediate forgiveness.

Taurus – Give him reason
The natives of Taurus do not like to be contradicted and when they get angry about something they must be able to vent and externalize everything that is not to their liking. This means that when you make them angry it is always good to take into account their reaction, the fact that it will not be light, and that you will probably have to endure even harsh words. But if you know you’re wrong, enduring is the only thing to do. In this way, as the days go by, you will see them more and more peacefully until everything is forgotten. Be careful though. Better never go back to the subject because doing so could make them even angrier than the first time.

Gemini – Do Something Nice
Those born under the sign of Gemini do not get angry easily and when they do it means that they have felt deeply hurt. When this happens, their anger is lightning-fast and tends to grow over time. For this reason, it is best to end it as soon as possible by apologizing over and over again. To this, we can add some nice gestures towards them. Feeling at the center of attention will make them forget at least in part the anger felt, making them a little more likely to find a meeting point, during which it will always be good to renew your apologies, to make it clear that you are sincerely repent.

Cancer – Being kind
The natives of Cancer do not like to feel angry and yet it is something that often happens to them because basically, they are extremely touchy people. When you make them angry, it is, therefore, advisable to try to overcome the moment together, apologizing and surrounding them with attention and kind gestures. In this way, by leveraging on something they care deeply about, you will get more and more consensus until the reason for the anger is exhausted. Be careful, however, because even if it may seem that they have left everything behind, the natives of the sign tend to keep in mind everything that makes them sick and at the first opportunity they will not hesitate to blame everything. Better to avoid this happening.

Leo – Let them vent
Those born under the sign of Leo always try to maintain light tones with those around them. When they get angry enough to show it, then, it is clear that what they are feeling is particularly unpleasant. If you are aware that you are in the wrong, the best thing to do is to let him vent, apologize and admit several times that he was wrong. Once this is done, it will be enough to stay next to them and wait for them to boil down to return to the usual relationships. It will certainly help to treat them well and make them feel important, which is extremely special to them and can overshadow everything else.

Virgo – Making a sincere apology
Virgo natives don’t like to feel anger, yet by nature, they tend to experience this emotion a little too often. If getting angry about a situation is something almost daily for them, doing it with the people they care about is a painful situation and they would like to get out of it as soon as possible. Making a sincere apology is certainly a good way to help them do this, giving them away to feel somehow refreshed and fixing the situation before the anger settles into something hard to erase. After all, they too can’t wait to let their feelings slip on them. Coming to meet each other will therefore be easier than expected, assuming you use the right words and take your faults, of course.

Libra – Explaining well
Those born under the sign of Libra when they get angry about something tend to experience everything with emotions so strong that they overwhelm. In addition to anger, there is also disappointment which, perhaps, is precisely what makes them angry the most. Being forgiven by them is not at all easy because they tend to suppress what they feel, simply avoiding confrontation and distancing themselves even before you realize what is happening. It is therefore very important that you try to explain yourself and make sure you do it accurately. Only in this way, in fact, will it be possible to meet them in the right way, rediscovering the harmony of the past, albeit with their times.

Scorpio – Apologize and never repeat the same mistake
The natives of Scorpio are particularly keen on human relationships and this translates into a marked sensitivity towards everything that comes to them from others. When you make them angry, therefore, in addition to anger at what happened, they will feel disappointment and a sense of betrayal that lead them to withdraw into themselves. To make them boil it is therefore important to apologize and do it as sincerely as possible and even several times. In general, even if with difficulty, they always tend to forgive. But not to do it a second time. For this reason, it is very important to make an effort not to repeat the same mistake. Because in this case, the anger that will be experienced will be so strong that there is no room for anything else.

Sagittarius – Give him a gift
Give him a gift Those born under the sign of Sagittarius get angry easily but, luckily, they tend to let things slip off just as quickly. A good way to get their approval even after pissing them off is to apologize by offering them a gift of peace. If you know how to seize the moment and choose something they like, you will most likely be able to solve everything. The important thing is to never go back to the subject and admit your faults if they are the ones to do them. It is still a very proud zodiac sign and with which it is difficult to reason unless you always leave the reason to them.

Capricorn – Waiting and Talking
Capricorn natives tend to withdraw into themselves when they get angry. In that period it is preferable to let them cool off because even talking to them and apologizing to them would not be able to get to them. When they finally appear calmer, you can instead try to return to the subject, offering your apologies and arguing the matter to bring out their every thought about it. Doing so, in fact, will help them to metabolize what has happened so that they can leave everything behind. It is mostly a matter of times and ways that will be well balanced from time to time.

Aquarius – Apologize and Apologize Again
Those born under the sign of Aquarius, in general, do not usually stay angry for long. Out of pride, however, they love to keep a face with those who have done them any wrong. If you are in the wrong, then, it is always better to apologize and admit your faults until it is evident that the moment has passed. Doing so will avoid relapses because basically, the natives of the sign usually forget what no longer concerns them to focus on things that are most important to them.

Pisces – Prove Your Sincerity
Pisces natives are people who do not get angry easily, when this happens it is usually because they have felt deeply disappointed. If you know you have faults in this regard, it is, therefore, important to apologize and do it with the utmost sincerity. In the face of sincere words, I am more than willing to understand or at least make an effort to do so. To this, based on the relationship you share, you can also add some gesture of affection such as a warm hug which, in general, is already able to erase any negative emotion by itself.