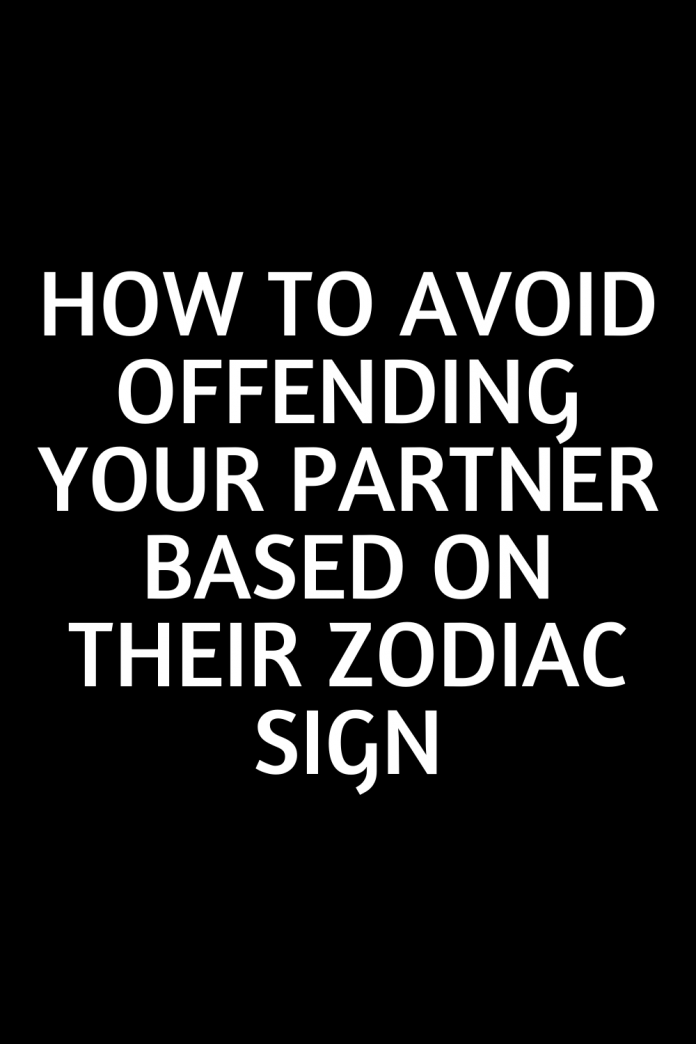 How to behave with your partner to avoid offending him.

When you live a two-person relationship, many things can create tension and nervousness between the two parties and often you risk arguing when, on the other hand, you could get along without major problems. Often, a wrong word or a gesture that is seen negatively on the other side is enough and things can take a bad turn. How then to avoid such problems? First of all, it is useful to know your partner and to be able to predict by yourself what can lead him to take it. Beyond that, you can follow the advice of the stars.

Often, the reasons for which we are offended may in some way depend on the influence of the stars. Today, therefore, after having seen how the zodiac signs change after suffering and which are the signs of the zodiac who love to live according to their own rules, we will find out what is the thing that can offend the partner. Since this is a topic related to the way of being and feeling, the advice is to also check the ascendant of his zodiac sign to have a clearer opinion of the situation.

Horoscope – The best thing to never do with your partner

Aries – Showing Yourself Distracted
If there’s one thing that makes Aries men nervous, it’s feeling pushed aside or overlooked. In order not to offend them, it is therefore important to give them as much attention as possible, especially if they are talking or if they have decided to spend some special time together. Showing oneself focused on something else would be like telling him that it doesn’t matter much and this, of course, would lead him to be offended and even a lot. And since the Aries native can be quite heavy when it comes to it, it’s best to avoid it as long as possible.

Taurus – Don’t tell him you love him too
Let’s face it, the Taurus man loves being tough but, deep down, he needs to feel reassured and to know that at his side he has someone who cares about him. Not responding to his I love you or doing it in an evasive or distracted way is something that risks hurting him more than he wants to admit. And when the Taurus man feels hurt, he tends to take things very seriously. To avoid getting offended it is, therefore, best to tell him clearly what you feel. In this way, he will feel satisfied and undoubtedly more loved.

Gemini – Contradicting Him
The Gemini man loves knowing that his better half admires and values ​​him. For this reason, when he is contradicted, especially if he is sure he is right, he ends up taking it very personally. Fortunately, he tends to let things slip on him and his resentment will never last more than a few hours. If you can keep him from feeling offended, though, that’s better. After all, we are talking about an extremely moody zodiac sign. And if he ever were to darken who knows how long he would be smiling again.

Cancer – Ignoring him
The Cancer man is a sensitive person, who loves to always feel at the center of attention of those who love him and who lives more doubts and fears than he tries to show. This means that ignoring him without a reason can trigger many of those anxieties that lead him to take offense at first and lead him to sulk immediately afterward. Much better to always pay him the right attention and let him get what you feel for him. In this way, you will certainly have a happier companion and be willing to reciprocate love in the best possible way.

Leo – Don’t agree with him in public
Although he appears more like a person in need of confirmation, the Leo man is also very proud. And if there is one thing he does not tolerate, it is feeling poorly taken into consideration by the person he has chosen as a partner. For him, the partner is first of all a shoulder, and not agreeing with him, unless you have valid reasons, is something that hurts him to the point of making him offend. The thing gets much worse if this happens in front of third parties. In this case, anger could also take over and it would be very difficult to make it go away. If the golden rule is therefore to always agree with him, an even more precious one could be that of not choosing to act differently when amid others.

Virgo – Tell Him He’s Wrong
Virgo man loves to be right all the time. Firstly because he is convinced that this is really the case and, immediately after, because he does not like to be questioned. When this happens he tends to experience it as a betrayal, especially if someone who he considers close to blames him. If you want to get along and avoid offending him, therefore, it is important to never blame him and if it becomes essential, do it with due attention and all possible care. For him, it will always be a bad blow to receive.

Libra – Changing plans at the last second
The Libra man is not very demanding and is generally always quite accommodating. If there is one thing that leads him to take offense in a heated way, however, it is having to suddenly change programs due to the choices made by someone else. This means that not showing up for an appointment, changing hours, or saying that you no longer want to do something that has been planned for some time, are actions you should never do. Once on his own, it is really difficult to make him smile again.

Scorpio – Tell him a lie
The Scorpio man has rules that he considers sacred and among these is that of not telling lies. In the same way, he expects the same from those around him, especially if it is someone he trusts. Telling him even the smallest lie, in addition to hurting him, will lead him to take it personally and to put his nose on it. Not to mention that vengeful by nature, he will not miss an opportunity to reproach what happened. And, since he is a person with little inclination to forgiveness, the best thing to do is always be honest. In this way, unnecessary and unpleasant confrontations will be avoided.

Sagittarius – Arriving late
It is true, the Sagittarius man has a particular character, and many times he ends up having his vision of the world around him. However, there are some actions that, if avoided, can make peace of mind reign within the relationship. Since it is a sign that appreciates and loves punctuality, arriving late is one of the things to never do. For him, it will be like telling him that it doesn’t matter much or that his time isn’t all that precious. In short, the thoughts he will do about it will lead him to be offended even for some time. Much better to avoid or if you really can’t help but delay, call him and apologize in advance. If so, he’ll appreciate the thought.

Capricorn – Being evasive
The Capricorn man likes to think that those around him feel comfortable in his company to the point of wanting to be entertained as much as possible with him. At the same time, he always needs to know everything about those around him and if he feels that something is being omitted, he tends to take it. If this attitude comes from the partner, things are even worse and the annoyance she feels can become quite evident. Always be honest with him and give him the answers he expects. Failure to do so could lead to arguments or a basic tension that could easily be avoided.

Aquarius – Deciding for him
The Aquarius man is an individualist, extremely attached to his privacy and proud of his personality. Sometimes it takes very little to offend him and knowing him is certainly a good starting point to avoid making mistakes. Having said that, it is always better to avoid making decisions for him because in addition to being deeply offended he could start a cold war, made up of silences and poisonous digs. And when we talk about deciding for him we are not referring only to the most important things but also to the simple choice of pizza to eat for dinner. In short, it is always better to leave the last word to him.

Pisces – Being unclear
The Pisces man is a simple person who loves to have fun and communicate freely with those he loves. When he realizes that the other side is unclear, he tends to take it as an attempt to distance himself, taking offense and reacting in a rather annoying way. Better tell him clearly what you are thinking so as not to give rise to misunderstandings that can hurt him and make him feel bad. After all, this is a sensitive person who once sad or offended is difficult to bring back in a good mood.