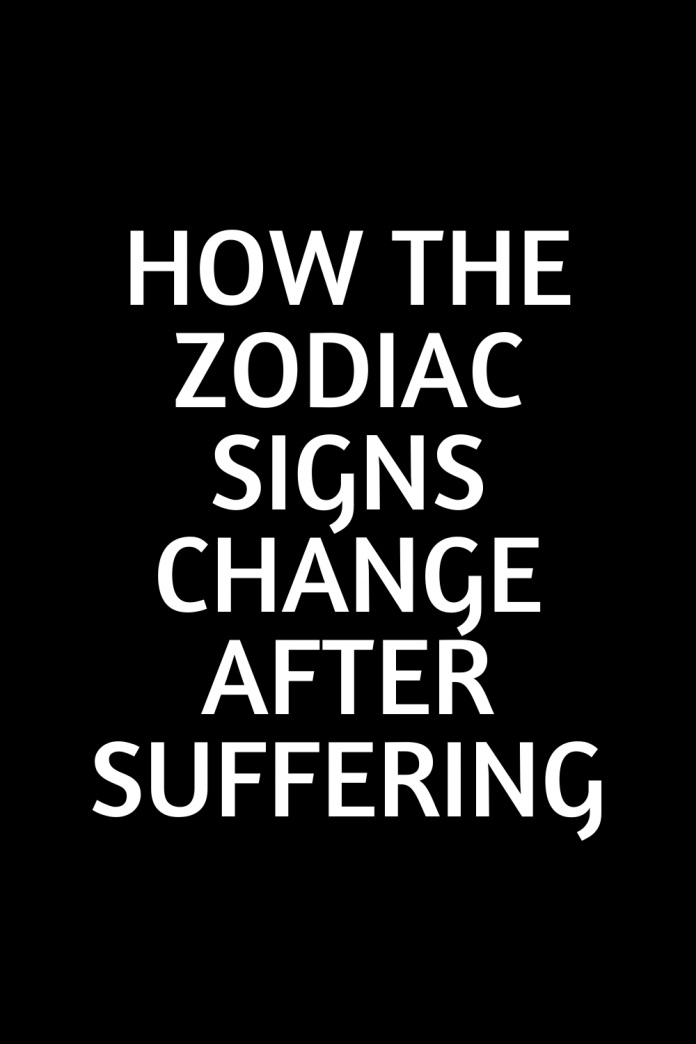 Suffering is part of the human being and like all important emotions, it brings with it a series of consequences. Let’s find out how it can change the various signs of the zodiac.

It is said that every experience tempers the human spirit, leading those who undergo it to make changes that are often invisible but that over time become more and more real.
Whether it’s something good or bad, everything you experience tends to change you and does so in different ways that change based on the type of experience, the people you share it with, your character, and, even if in minimal part, under the influence of the stars. A positive experience will almost always have pleasant implications while a negative one such as, for example, suffering, will lead to changes that can often be very important, completely changing the lives of those who face it.

So, after seeing which are the zodiac signs that love to live by their own rules and what is the most common mistake that the signs of the zodiac make in a love story, today we will find out how each zodiac sign changes after facing pain.
Since this is an aspect that concerns emotions, in particular, it is advisable to also check the profile of the ascendant of the various zodiac signs, to have a more precise idea of ​​the type of change they may undergo.

Horoscope: How the zodiac signs change after suffering

Aries – They become cynical
When they find themselves suffering for something, those born under the sign of Aries end up becoming more cynical. Theirs is a kind of defense from the pain itself. By denying that they suffer, they think they can pass what they feel faster, without considering that it is only by admitting and understanding how they are that things can change. When the moment passes, partly because of tiredness and partly because of the fear of finding themselves in a similar situation again, they end up getting tougher and more cynical, once again in the hope of being able to overwhelm what they feel. . A vicious circle from which they can only escape by accepting pain, embracing it and transforming it into a moment of growth. The moment that would help them to no longer be so cynical but more open and available to others.

Taurus – They become darker
The natives of Taurus are essentially sensitive people and this means that every smallest trauma for them affects a lot both in everyday life and in the way of being and doing. When they find themselves suffering from something, they end up changing their opinion about the world and the people around them. This makes them gloomy enough to make them rigid both towards others and the situations they live in. A modus operandi that they implement almost without realizing it but that, even recognizing it, they would not know how to change. For them, it is necessary that time passes and that this can cure them before they can return to smile and face life with greater serenity.

Gemini – They become moodier
Those born under the sign of Gemini do not like to suffer and are unable to handle the emotions they feel when something occurs that they are unable to control. If they happen to suffer from something, they usually let it slip on them until they almost forget about it. A little less if it is someone they believed in making them sick. If so, they end up becoming extremely moody, exasperating their natural way of being in proportion to how bad they have been. This often makes them unpredictable and more susceptible than they would like. But it is part of their being extraordinarily human as is knowing how to re-emerge from their suffering to return to smile as and more than before, finally moody just enough to make the alternative.

Cancer – They Get On The Defensive
When they find themselves in pain, the natives of Cancer end up getting on the defensive. They do this both about the issues they have been burned about and about the people who they believe have disappointed them. It is a way of doing things that they can’t control and that can sometimes make them appear out of control and grumpier than they would like. When this happens, however, they cannot apologize and think they are entitled to their way of doing things. Fortunately, time almost always calms them down and when this happens they manage to return to the way they used to, or almost. They always remain a minimum of attention because they are now aware that they can get hurt.

Leo – They become aggressive
When those born under the sign of Leo find themselves suffering for something or someone, first of all, they have to deal with their negative emotions. These compromise them to the point of making them aggressive and decidedly closed towards those around them. Added to this is the fact that they always pretend to be right and when they do not receive the right consents from others they take it to death, increasing their aggression beyond belief. Time, at times, manages to mitigate them but does not make the traces of what has been lived completely disappear. For this reason, once they experience a disappointment that makes them feel bad, they will become more cautious, suspicious, and less willing to let themselves go with others.

Virgo –
The natives of Virgo become more cautious, even if they try not to show it, they are particularly sensitive people and not at all able to face their “demons”. When they find themselves experiencing pain over something, then, they end up taking it personally, withdrawing into themselves, and trying to deal with the pain in their way. Once passed, this will remain in the form of distrust and fear. The thought of being able to face it again pushes them to step aside and try to avoid any possible situation considered at risk. For this reason, when they suffer or have suffered, natives of the sign become more cautious in life as well as in relationships.

Libra – They close in on themselves
Those born under the sign of Libra have always pursued everything that is beautiful and that somehow recalls harmony. Pain and sorrow are therefore things that are not part of their way of being and therefore struggle to manage. When they suffer from something, they, therefore, find themselves experiencing emotions that they do not like and this leads them to close and isolate themselves. They do it primarily in order not to show themselves to others while they are not in their best state and also because they are unable to understand how to manage their feelings in front of others. Unfortunately, once they experience pain, they end up being quite rigid towards anything that can remind them. The reason why they may not be at their best in certain contexts.

Scorpio – They become wary
The natives of Scorpio are highly perceptive people and always able to grasp everything that happens around them. It is therefore difficult for them to feel bad about a situation unless it was created by someone they trusted. When they do they try not to think badly for any reason, even at the cost of silencing their instincts. Once faced with the problem, however, they do not hold back and, aware of what has happened, begin to get distrustful. This movement of tending to last at least until the pain has been completely metabolized and, unfortunately, prevents him from letting go even with people who are completely unrelated to what he experienced. Fortunately, their ability to recover anytime sooner or later,

Sagittarius – They become selfish
Those born under the sign of Sagittarius are people who do not like to suffer. And, when this happens to them, they have a decidedly aggressive way of reacting. They tend to become selfish and think only of themselves, certain that others are all the same. This is also true when the suffering is not caused by a specific person but by an improperly managed situation. Unable to turn against and be objective when it comes to themselves, they prefer to poison themselves with the world rather than embrace pain and make peace with the awareness of being human and therefore having feelings.

Capricorn – They start to be afraid
When they suffer, the natives of Capricorn become fearful of pain itself, and because of this, they begin to deprive themselves of everything that could make them happy. They do it because it is the only way they know how to react and because they fear the possibility of being sick so much that they prefer not to take risks. This pushes them not to be 100% sincere, to act more for their benefit than to do others’ good, and to lie, if they have to, to get what they want. Attitudes that end up bringing them in front of other scams and the risk of new pain. And all for an endless vicious circle, from which they struggle to extricate themselves unless someone helps them in this regard.

Aquarius – They get tougher
Those born under the sign of Aquarius are used to better manage the emotions they feel.
This occurs because even in their intimacy, they always try to give it a name and understand how they feel about it. In the face of suffering, however, they put in place a kind of rigidity that leads them to become harder on the people around them. And, even if this happens mostly unconsciously, it can be said that theirs is a form of defense against having to suffer repeatedly. Once experimented with this option, they prefer to be cautious and avoid over-trusting others. Having to choose, they prefer to be on the side of those who hurt rather than on the side of those who suffer.

Pisces – They Increase Their Resilience
Natives of Pisces are so sensitive that pain is something they experience rather quickly. Nonetheless, their resilience allows them not to be spoiled by it nor to lose their smile. When they suffer from something, they make themselves even more resilient than they are. This denotes strength and courage difficult to find in other signs of the zodiac.
At the same time they always remain kind to others and even if at times they find themselves having to take time to heal the wounds they carry, they always know how to return as and better than before, opening up to the world naturally and grasping all that is there. life has to offer them.