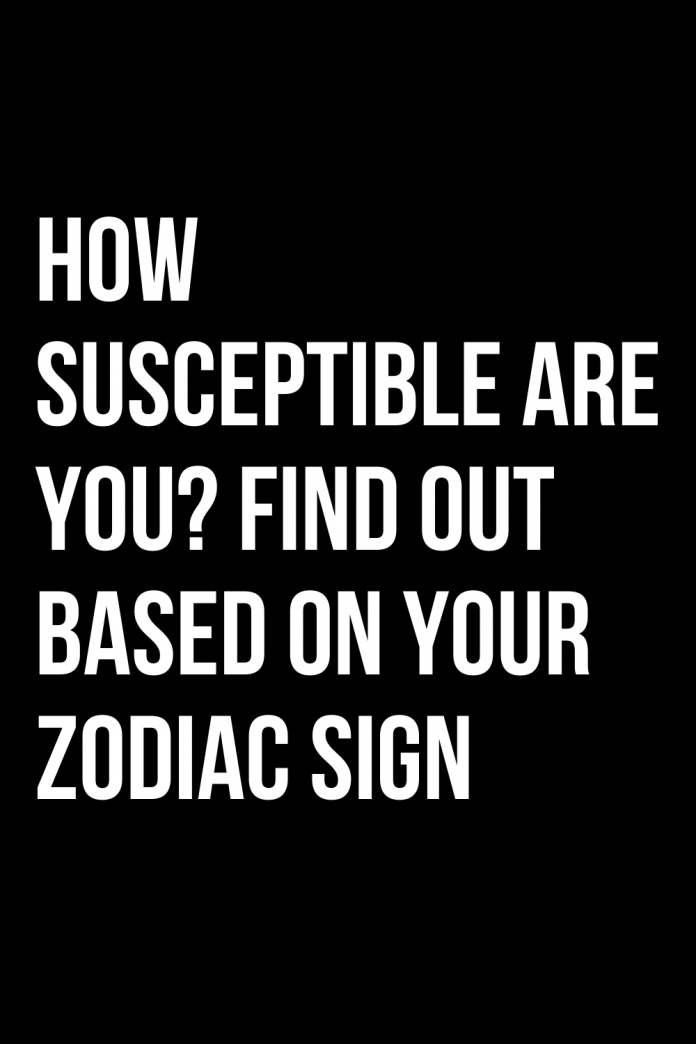 Are you sensitive? Here is the opinion of the stars for each zodiac sign.

Each of us has strengths or weaknesses that make us unique. There are always cheerful people and others who are more closed to others and there are people with infinite patience while some are used to jumping to the first wrong word. Many of the features that outline us are influenced by the stars, to the point of making us almost predictable in some respects. It is obviously an influence that mixes with other factors such as character, experiences and the way in which life has changed us over time. Nevertheless, in order to get to know each other better and to understand others better, it is always useful to look at things from another perspective, trying to question the stars. For this reason, after seeing how narcissistic we are and what is the most suitable Christmas tree for us , today we will find out if and how much we are susceptible based on our zodiac sign. As always, it is advisable to also check the profile of your ascendant in order to have a more complete picture of the situation.

How susceptible are you? The stars have the answer

Aries – Rather Touchy
Let’s say you are someone who tends to jump for every minutia, even freaking out if what you are told is not to your liking. Generally, however, it is a moment after which, especially if you have already said everything you think about it, you tend to go back as before, smiling as if nothing had happened. An attitude that often puts those in front of you in difficulty and is uncertain about how to continue to relate to you. However, you tend to live things in the moment and for this reason you don’t seem to care too much about what others think. Try, however, to remember that not everyone sees things like you and that if a moment before you go into a rage, it is difficult for everything to get back into place just because for you it has already passed.

Taurus – Susceptible only if they provoke you
Basically you are a calm and peaceful person who loves moments of serenity and absolute relaxation in life. For this reason, you always tend to avoid confrontations or situations that can cause you boredom. And getting angry, for you, is something particularly tedious that you prefer not to have to experience. However, when you are intentionally attacked or feel threatened in some way, you tend to unleash all your grit, showing yourself capable of catching fire in an instant. Luckily, letting off steam allows you to scale back soon after, regaining your usual calm and picking up your day where you left off before the sudden anger.

Gemini – Susceptible Based on Moments
Your duality leads you to be unpredictable in this respect as well. If there are days when your calm is almost proverbial, letting you pass over everything, there are others when talking to you can become difficult due to your being highly sensitive. Unfortunately, predicting your state of mind is impossible for anyone. Even you struggle to understand what you are like until you realize that you have a mood under your feet or that you are overwhelmingly positive. So try to identify with those around you, trying to mediate your ways of being in order to show yourself more balanced. This way your relationships will be smoother.

Cancer – Susceptible to the nth degree
As a touchy person as you are, susceptibility is also a characteristic that belongs to you 100% and that makes you a person very often difficult to approach. Sometimes, in fact, a few words are enough to make you jump like crazy, leaving the people around you baffled. Your problem is that when you feel threatened or afraid of losing something or someone you tend to react violently, attacking whoever is in front of you. A way of doing that you soon regret but which you prefer to keep intact out of pride. Apologizing after an outburst, on the other hand, could help you not to lose the affection of your loved ones, limiting your fears over time and with them also your susceptibility. It’s worth giving it a try, right?

Leo – Very Susceptible
Although you like to show yourself as a positive, cheerful and good-natured person, when you feel attacked you become very sensitive, to the point of losing your mind and even those who were just trying to give you some advice as your enemy. This attitude is partly due to your obsessive need to always feel at the center of the world and on the other hand from the need to have continuous confirmation from others. Trying to be more sincere, even showing your weaknesses, would be of great help in this regard, also leading you to more relaxed relationships with the people around you.

Virgo – Really too sensitive
Yours is without a doubt one of the most susceptible zodiac signs of all. A wrong word or a gesture that you think is not suitable is enough to get you out of anger and easily lead you to the fight. This is partly due to a kind of insecurity that you carry around and a little from a poor ability to empathize with others. For this reason it often happens that you take negative words that are not, giving wrong meanings to the gestures of those around you. An attitude that, if your loved ones can also try to understand, is not welcomed by those who have known you recently. The only way to resolve the situation is to count to 10 before venting your anger and to always remember that sometimes, when in doubt, it is better to first clarify and then, if necessary, get angry.

Libra – Not very sensitive but with little propensity for forgiveness
By nature you are not someone who takes it easy. If this happens to you, however, you know how to assert yourself, acting in counterattack and explaining your reasons with extreme calm. This makes you a person with whom it is easy to interact but who still hides the dark sides of her behind her aura of kindness. Although not inclined to shoot for everything, in fact you have a tendency not to forget every affront immediately, so much so that you can throw it off even years later or harbor resentment that can come out at any moment. Perhaps, if so, an immediate reaction would be more understandable and would help others apologize and help you not to have negative feelings for too long.

Scorpio – Definitely Touchy
Although you always do what you can to let go, your disposition makes you feel like you’re on the edge much more easily than you would like. This makes you a sensitive person who often and willingly tends to dot the i’s for all those situations that he deems wrong or that do not marry with his way of seeing things. This is combined with a vindictive nature that makes you almost dangerous. When something does not go as you would like or you believe that someone has wronged you, if you do not attack him on the spot giving vent to anger, your answer is to harbor a blind resentment for years, contemplating a revenge that sooner or later will come, precise and pungent, just as one would expect from a Scorpio.

Sagittarius – Not always touchy
Most of the time your cheerfulness and the spontaneity that has always distinguished you allow you to let go of the trifles that would make others furious. It is a way of acting that you put in place first of all for yourself because doing it makes you feel good. When someone tends to overdo it, however, your susceptibility comes out making you almost aggressive and always ready to fight in order to win what matters to you at that moment. You are therefore a person who can be approached with serenity but of whom you have to be careful. In short, it is better to be friends than enemies.

Capricorn – Susceptible When You Feel Go Live
In character you are not exactly a person who snaps for every little thing. Everything changes, however, if what you are told makes you feel focused on the alive. If you believe that others are right or if some words seem to highlight something where you went wrong or you feel lacking, then your susceptibility comes out, leading you to close and poke your nose or even collide with force in order to be right. Perhaps, before taking action, you should try to figure out if others are really trying to sting you in the quick or if the problem is simply yours. By understanding this, in fact, you may be able to carry on in a more serene way, avoiding clashes that are often useless but capable of creating frictions that are difficult to resolve.

Aquarius – Almost Not
At All Touchy The truth is that you care so little about what other people think that you just can’t waste time blaming their words. Of course, if you don’t like something you say it without too many problems but it ends there and tends to take place almost always with a certain calmness, at least on your part. Your love for simple things and for the moments of relaxation that you always have a great need, in fact, leads you to avoid giving rise to discussions about things that you consider of little importance. All of this, however, can sometimes get on your nerves or make you seem completely disinterested in what you are talking about or the person in front of you. One thing to consider when dealing with someone you care about.

Pisces – More than susceptible, with a strong propensity to be hurt
Your empathy almost always leads you to understand others so much that it also justifies attitudes that would normally make anyone angry. This doesn’t mean, however, that you don’t feel attached or that you don’t suffer from the situation. The problem is that even when you are deliberately hurt you always try not to do the same with others. This way of doing things, definitely admirable, however, leads you to keep everything inside yourself by creating suffering that you could avoid, perhaps by gently pointing out if something does not suit you or if someone is behaving in a wrong way. Sometimes an argument is better than a useless pain, right?