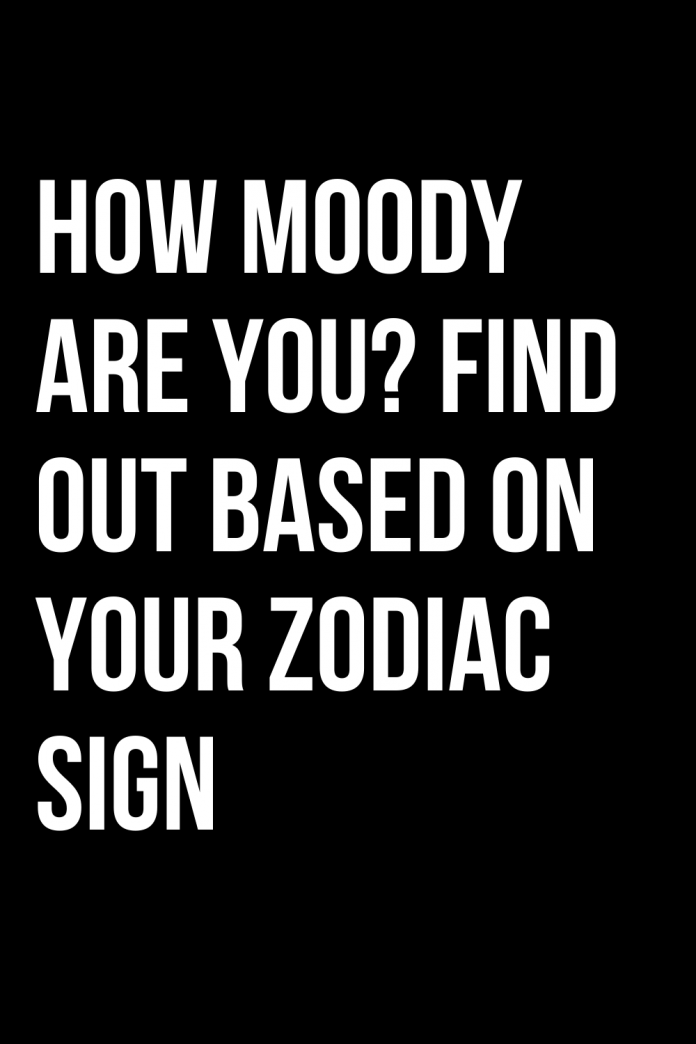 Do you want to find out if you are a moody person or not? Here is the opinion of the stars.

Each of us has various characteristics which, put together, give life to a series of ways of doing that more or less completely represent our character. Among these there are some that stand out more than others or that, for various reasons, tend to get noticed more easily. One among all? Being moody. In fact, those who are moody often have difficulty in controlling their way of being which leads to sudden changes in mood or ways of doing things. A feature that, needless to say, is at least partly influenced by the stars so much so that there are zodiac signs famous for being moodier than others. Today, therefore, after having seen what the month of November will be like and what are the most reserved zodiac signs, we will find out which are the moodiest. Since this is a way of being, to get a more complete picture of the situation, the advice is to also check the profile of your ascendant.

Horoscope: Find out if and how moody you are

Aries – Not very moody
Of all the signs of the zodiac, yours is one of the least likely to be moody. Of course, like everyone else, you tend to change your mind and sometimes even your way of dealing with life. Apart from this, however, you are usually quite rigid in your path and able to maintain a modus operandi even for some time. As for your mood, this depends more on the situation in general that you are experiencing than on any interference and this leads you to be a rather stable person from a character point of view as well as prone to always respond in the same way to certain stimuli.

Taurus – Not at all moody
Your being a rather down-to-earth and well-organized person leads you to such stability that you can be considered anything but a moody person. Although internally you happen to experience conflicts, these in fact depend more on problems and objective situations than on your mood changes which in fact are really rare and well motivated. For this reason, even if prone to evaluate what happens to you from various points of view, you always remain basically tied to your ideas and the certainties that you carry almost like a flag, demonstrating how nothing is able to scratch your mood, regardless by its nature.

Gemini – Highly moody
Much of your moody being depends on the duality that has always distinguished you and which very often leads you to mood swings that are difficult to explain in any other way. Although, living it from the inside, you do not perceive all these variations, those around you can only notice them, especially because depending on how you feel you may even get to show yourself different to the people around you, showing yourself more or less kind and giving even opinions different from those given previously. In short, yours, among the signs of the zodiac, is certainly one of the most moody.

Cancer – The most moody of all
Let’s face it, yours is the most moody zodiac sign ever. Your way of being is evident from your way of dealing with others and towards life itself. Sometimes, in fact, nothing is enough to trigger you, leading you to tears or anger and this happens a little because of some underlying insecurities but, above all, for the variations in your mood, sometimes so great that they cannot be check. A problem that has always characterized you and that is practically part of you, to the point that those who know you tend to always take into account your reactions, often exaggerated and that even when you try to hide they are noticed.

Leo – Not used to being moody
For you, life is something that must be faced head on and without ever stopping too much to complain about what is wrong. For this reason you almost never let yourself go to emotions preferring action and the achievement of concrete results. This way of thinking and acting makes you a stable person and little prone to mood swings, which is why it can be said that you are not a moody person at all.

Virgo – Negative Lunatic
Your attitude towards life often turns negative. From this point of view you could be considered a moody person because, despite being basically very rational, you always tend to see the glass as half empty and just a little thing that goes wrong compared to how you thought it was to get you out of test, leading you to think the worst and creating a negative view of everything around you. Unfortunately, this does not happen for what is positive, which is why you are a moody person but who shows this way of being only in adverse situations.

Libra – Moderately moody
If we wanted to make a ranking of the most moody zodiac signs, yours would be roughly in the middle. Although you often tend to maintain a detached and almost superior attitude towards both life and the people around you, sometimes your mood takes over. Often you don’t even know why this happens, leading you to see everything black or make you feel euphoric for no real reason. Changes that you highlight with a greater or lesser openness towards life, so much so as to almost attract attention.

Scorpio – More than moody, tending to change your mind
It can’t be said that you are a moody person and this even though sometimes people tend to think so. The reason? Being someone who gets involved and always openly relates to others, it can happen that something that you thought was right in a way suddenly appears to you in a new light, thus leading you to change your mind. Confident of yourself, you don’t mind expressing what you think and these sudden changes can give you the wrong idea. The point, however, is that you are not moody at all but simply able to change your opinion and express it without any problem. From this point of view, therefore, the real problem is in the lack of strength or objectivity inherent in those who judge you.

Sagittarius – Lunatic
Yes, you are definitely a moody person. You may not be on the podium but you will certainly win a very high place in the standings. Your mood swings are made even more evident by the brightness that distinguishes you and which in case of sudden shadows tends to diminish rapidly, showing a difference in your way of carrying or acting that is definitely impossible not to notice and that clashes with the image you usually give of yourself.

Capricorn – Not very moody
It often happens that you feel more or less happy depending on what happens to you. Sometimes even a rainy day can change your mood, as can bad news read in the newspaper in the morning. This makes you a moody person and this despite you having a rather contained way of showing it. In fact, your gestures and actions remain unchanged and only those who know you well notice the slightest variations you encounter such as the expression of the face or a sense of gloom or sudden euphoria that can be deduced from the energy you use to move or speak. In short, moody yes but average.

Aquarius – The introspective lunatic
Yes, you are moody and often and willingly you are even when you don’t realize it. Your way of being, however, does not suffer great effects except that of leading you to desire more privacy and the desire to be alone to reflect or do anything that is able to make you feel better. This also applies to those times when you find yourself in contact with others, even without realizing it, to isolate yourself almost completely.

Pisces – More than moody, humoral
Basically you are not a moody person but a very humoral person. Your being often empathetic doesn’t help. In fact, you find yourself experiencing sudden emotions that come to you as if they were explosions and that force you to almost have to recover. This in the eyes of others can make you strange at times, making you appear as a moody person and prone to mood swings. A misconception since the difference between the two is quite clear but recognizable only by those who know you well enough.