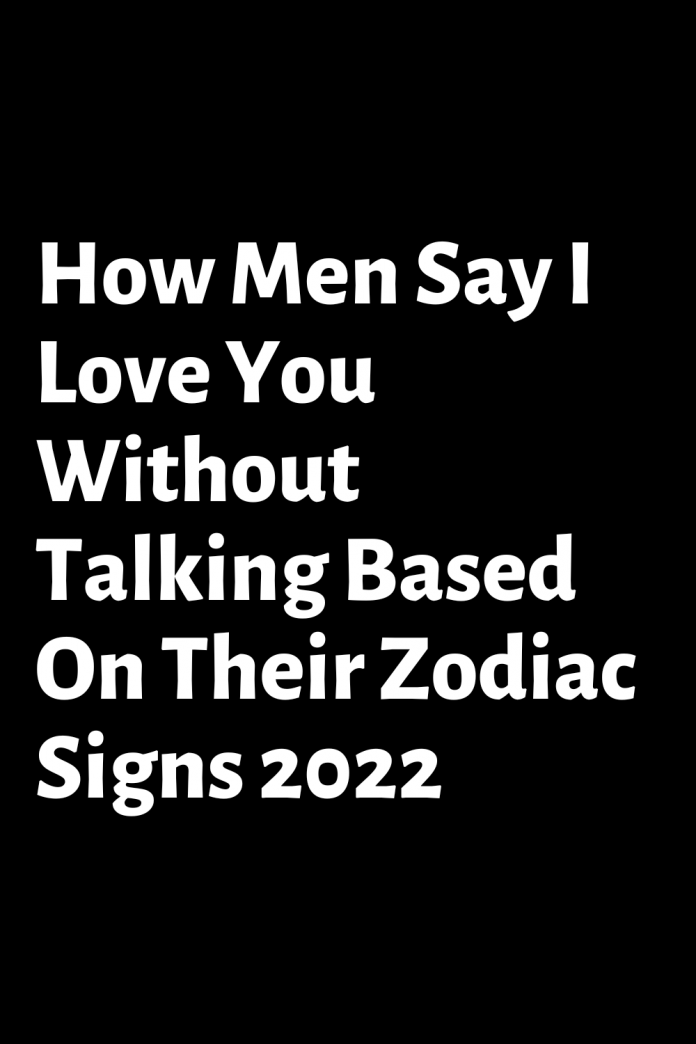 Most men find it difficult to verbalize the depth of their emotions, even when they’re crazy about a woman.

However, each of them has a very special way of saying “I love you”, without having to say those three little magic words.

When a man of the sign of Aries loves you, he takes on the role of a brave knight in shining armor. He begins to see you as his princess whom he has a duty to protect.

Don’t get me wrong, that doesn’t mean that he sees you as weak or that he thinks you need his help.

He just wants to make sure you know you can count on him to support you at all times.

The greatest proof of love a Taurus man can give you is to let everything go your way and your way.

When the Taurus man really loves, his stubbornness goes away and he becomes ready to compromise, if not more.

It becomes more than obvious that he wants to please you, even if that means he has to put his nature aside.

When a Gemini wants to show you his feelings for you, without really needing to verbalize them, he will do anything to make you laugh.

He will go out of his way to make your life around him as interesting and fun as possible.

For him, the greatest sign of affection he can give someone is, to make the effort to make every moment spent with the loved one memorable.

If your sweetheart is a Cancer, he will show his love to you by loving everything related to you as well as everyone who is important in your life.

Not only will the Cancer man treat you like a queen, but he will also be a true gentleman to your best friend, your mom, your sister, etc …

He will adopt this behavior because he knows how important these people are to you and it will immediately mean that they become important to him too.

A Leo man will show you his love by becoming your number one fan and he will be the wind in your wings. Unlike Virgos, Leo won’t do things for you and they won’t babysit you.

On the contrary, it will push you to the extreme and make you accomplish things that you didn’t even think you could do.
Virgin

Virgos are the kind of man who will show his love to you by doing things for you. It is not that he will give you the opportunity to use him, but that he will do everything possible to try to put your life in order.

A Virgo man in love will always push his partner to make an effort to make her the best possible version of herself.

The way for a Libra man to tell you how much you mean to him is to show you how special and unique you are to him. If a Libra man really loves you, he will never treat you like the other girls in his life.

On the contrary, he will make sure that you know that to him you are anything but ordinary and that you definitely stand out.

The catch with a Libra man is that he probably won’t show you all of this in the most obvious way, which is precisely why you’ll need to watch out for little things and little signs of attention.

A Scorpio man will show you his love through jealousy. This does not necessarily mean that he will become an overly possessive and overly jealous man, but he just cannot hide the fact that he is afraid of losing you.

When a Sagittarius man is madly in love with a woman, he shows it by his loyalty. It’s not just that he won’t physically cheat on you.

The Sagittarius man won’t have eyes for any other woman and he will make sure you know that you are the only one he sees himself with in the future and forever.

The best way to know that a Capricorn man really loves you is when he puts you in front of his work.

The Capricorn man is known to be a very ambitious person, and he’s rarely willing to put his career aside for love – unless it’s for the right person.

An Aquarius man gets super romantic when he falls in love.

He will never get too goofy or cheesy, but he will show you his feelings through different grand gestures that you will surely appreciate.

If your sweetheart was born under the sign of Pisces, he will show you his love by wanting to change for you, even if you have not even asked him to do so.

It’s not that he’ll become a whole different person or that he’ll want to pretend he’s something he’s not, but, he’ll just want to please you more and get better.

Take this as a compliment, because it is you who inspire him to become the best possible version of himself.