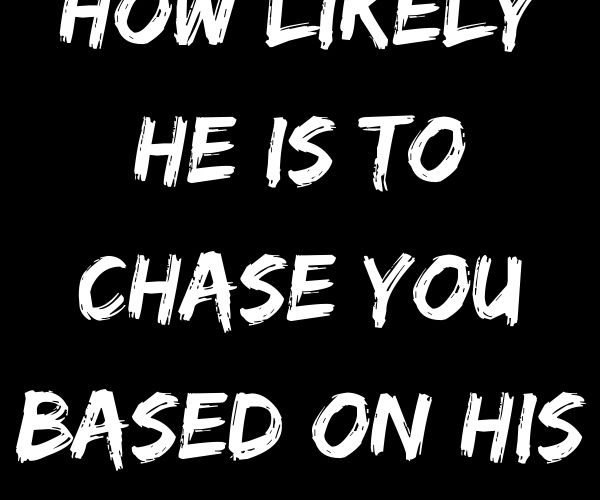 This sign likes the chase more than anything. They will chase you, but once they catch you, they will start losing interest in you.

The harder you play to get, the more enthusiastic they will be about chasing you.

They believe in themselves, and they know that they can get whomever they want.

Actually, they won’t stop chasing you until you give them a chance to get to know you better.

The only problem might occur if they start becoming disinterested because you didn’t fulfill their expectations.

They feel that everything has to be perfect, and if it is not like that, they will move on because you are obviously not their soulmate.

When a Taurus chases you, it won’t be so obvious like in the example of an Aries.

They like to chase, but yet, they are trying to make a balance since they don’t want to come off as stalkers.

They will chase you but will never go as far as some other signs.

It is because they don’t want to push anything but to leave things to go their own way.

They make great partners but only if you respect their rules.

If not, they won’t make so much effort for you because they don’t want to be the only ones trying.

Their game is soft, sensible, and loving, and every minute they spend with you, they will try to make you feel good.

They always put their partners first even if that means that they will get their hearts broken.

This sign likes to chase, but they don’t know how far they want to go.

One day they want to go all in while the next one they simply want to give up on everything.

They are pretty indecisive about romantic relationships, and in most situations, their partners blame them for that.

But they always get away with their charm and playfulness which are their most common characteristics.

When they chase, they go all in, and when they don’t want to do that, they give up on all the effort they made the previous day.

All in all, if you have enough time to play and have fun with them, we suggest you spend more time so you could get to know them better.

Just know that once they fall in love with you, you will never be able to get rid of them.

This is one of the most emotional zodiac signs, and they always have their hearts on their sleeves.

They don’t like the game of chase so much but they believe in destiny and feel that the right one will come into their lives when the time comes.

They are not totally uninterested in the chasing game.

They know that they are the ones who need to make the first move sometimes, but they don’t want to push anything.

They believe that the people they like might freak out if they start chasing them all of a sudden.

That would mean losing someone because they were pushy, and that is the last thing they want to do.

They will rather wait patiently because they know that good things don’t happen overnight.

Oh boy, how this sign loves to chase! In fact, the game of chasing is in their DNA. They like it, and it is always all about them.

It doesn’t matter if the other person doesn’t like it—they will do it anyway. The bad thing about them is that once they get the person they chased, they will probably move on to another one.

They won’t have two partners at the same time, but keeping their options open is what they like because it makes them feel safe.

Also, when they chase, they make their blood circulate faster, and that is what turns them on.

They will never give up on chasing even if it will be just innocent flirting with some girls.

That feeling is making them feel alive. If they know that they can still play the game, they will feel desirable and attractive.

That’s why they will never give up on chasing, and they will always be a little bit wicked.

Virgo is someone who will never chase because they don’t see any sense in doing it. They think that if someone is destined for them, that person will come into their lives sooner or later.

They believe that by chasing people, you will actually lose more than you get and that chasing is only for someone who knows how to play that game well.

And Virgo is definitely not the right person to do that, and they are not afraid to admit it.

They don’t like to be chased as well, but instead, they prefer when things go with their natural flow.

They will never be with someone just to prevent themselves from being alone, and they would rather wait longer to get the right person than to waste their time with someone who doesn’t deserve them.

Libra is a sign which will chase if they feel good about it.

They will never do it for fun but because they feel that they will do the right thing if they try something.

In the case that they chase, they do it so sweetly and cutely, and they always take care of other people’s emotions.

They don’t want to hurt anyone because they are pretty emotional themselves. They always put others first, and they take care of them.

What they feel is not so important because they always find ways to make themselves feel better no matter what happens to them.

Their chasing might not look like chasing to someone who is watching it all, but that is their style, and they simply stick to it.

They will never do something that would break their principles, and they strongly stick to their beliefs.

They are led by their hearts and their emotions because they know that they can never be wrong.

This zodiac sign is someone who doesn’t show what they feel so much.

They need to spend a lot of time with you to get to know you, and then maybe they can try something.

The catch is that they are not sure of their performance, and they believe that they won’t play the game well and that they will only embarrass themselves.

They don’t have enough courage to do things that could change their lives, so they don’t do anything about that.

They strongly believe in real love, and they will patiently wait for the right one to come into their lives rather than chase them.

Also, they believe that chasing is only a game and that you really can’t meet your soulmate like that.

This zodiac sign won’t chase you as you want. They have mild natures, and they will probably wait for you to chase them.

They are very sensitive, and they never say what they think—maybe that is why they sometimes get misunderstood.

Maybe they won’t be so pushy, but that doesn’t mean that they won’t love you as they have never loved before.

In fact, this sign has a giant heart, and they always give themselves all in to every relationship without regrets.

They believe chasing is a game where you have to be a real player, and that’s why they think it is not for them.

They would rather stay single until the right one comes. The most important thing about them is that they easily get over breakups.

So, if you hurt a Sag, they won’t sweat the small stuff and get over you as if you never dated.

This sign is someone which chooses the means to get what they want. So, if they need to be players to get someone they like, they will do it.

They will use all the tricks and tips that are needed for a quality chasing game.

They hate to lose, so they will never give up on the person they like. When they chase, they do it like it is in their blood.

They know what kind of compliments they have to say, how to act, and how to pretend to get what they want.

And even if someone might think that they are cold-blooded, in fact, they are extremely warm people who would do it all for the person they love.

So, if you fall in love with a Capricorn, just know that you will be chased, loved, taken care of, and respected.

If you thought that this sign is going to chase you, you are so wrong. You see, what they hate the most is making someone be theirs.

Even if they like you a lot, they will never admit it, and they will play hard to get.

If you think you would be a perfect match with them, you will change your opinion very soon because their behavior toward you will be bad.

They will never chase you but will want you to chase them because they enjoy that game.

They like to be pursued and treated like the apple of someone’s eye. That is something they feel great about, and they like that feeling the most.

So, if you think they are worth the chase, just bring it on.

They believe that there is the perfect match for every one of us and that they shouldn’t chase someone who isn’t supposed to be theirs at all.

This sign is emotional, and they believe in real love. That’s why they will never do something they are not okay with.

They would rather wait longer and during that time make a good career than to waste time with someone who they will break up eventually.

They always think two steps ahead, and that’s why they don’t have so many problems in love relationships.

When they find the right person, they are willing to do anything for their happiness.

They are willing to go the extra mile because for them, love is a force that moves the world, and to them, it is actually the most important thing because, without love, nothing has a purpose.