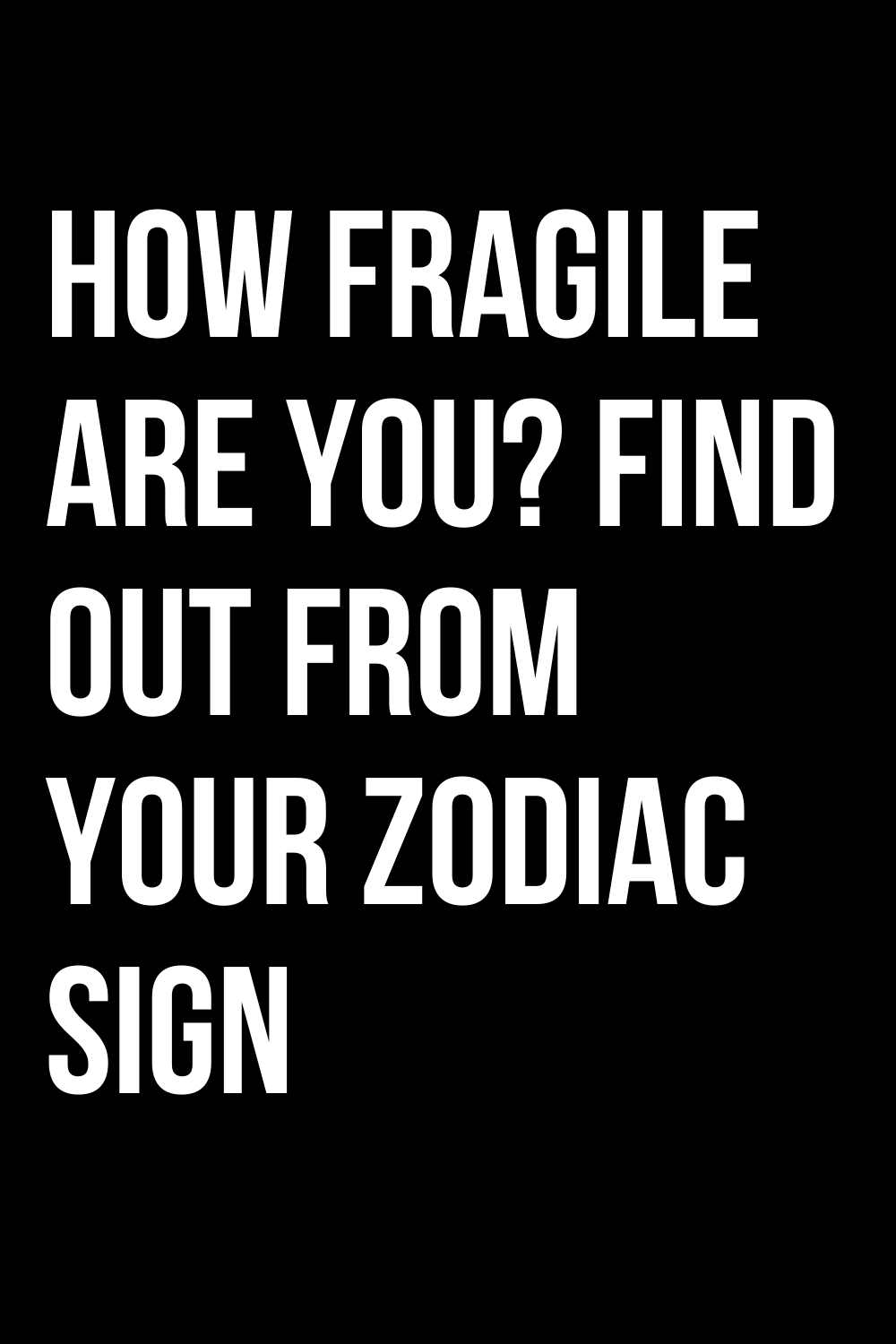 HOW FRAGILE ARE YOU? FIND OUT FROM YOUR ZODIAC SIGN

Find out if and how fragile you are or if you have well-hidden resources that you know how to bring out in due time. Here’s what the stars say about you.

In life we ​​often find ourselves classifying people as strong or fragile. Although in reality, the personality of each of us is extremely more complex, anyone faced with such a split of personality always thinks that he must be on one side rather than the other.
But how many are right? Defining if a person is fragile is extremely difficult and does not depend much on how he speaks or behaves but on how he reacts to the difficulties of life. This means that a person who cries often may not be fragile at all but simply find an outlet for her emotions before acting as a strong person. On the contrary, someone who always shows himself on the axis of war could do so because driven by the need to hide their fears behind an aggressive attitude. In short, understanding the fragility of others is extremely difficult but it is largely influenced by the stars. For this reason today, after seeing how they love the various zodiac signs and how to prepare for spring, we will find out what are the most fragile zodiac signs of the zodiac. Since this is a way of being, it is advisable to also check the profile relating to one’s ascendant.

Horoscope and fragility. Here are the most fragile zodiac signs

Aries – Rather fragile
Those born under the sign of Aries love to be strong and always ready for action. In reality, behind this aspect, there is an underlying fragility due to the insecurities that tend to carry around throughout life. This also determines their constant need for competition. Something they put in place to prove to others but especially to themselves that they are the best. Although always ready for battle, therefore, inside they have a fragility that often pushes them to avoid clashes where they think they can lose, leading them to show themselves strong and courageous only in the face of unequal battles where they have the upper hand.

Taurus – Not very fragile
The natives of Taurus are sensitive people but not as fragile as one might think at first glance. Determined as never before, they always know how to bring out the strength, choosing from time to time the battles to be faced and those that are better postponed to better times. Of course, they have weaknesses that lead them to try to avoid situations that fear them more than others. Except for these details, however, they always try to analyze themselves to grasp the insecurities and work on them to make them strengths. Which they do quite well. They may not be ready to face bigger situations than they are, but they certainly can get by in the normal routine of life, dealing with and managing the problems that come their way.

Gemini – Extremely fragile but resolute
Geminis are sensitive, contradictory, and downright fragile. Theirs, however, is a form of fragility that over time can change in strength, allowing them to take steps forward and thus defeat fears and possible defeats. Very attached to life, they fear emptiness and the uncertainty of tomorrow sometimes pushes them to have greater worries than they might encounter. For this reason, in negative moments, they tend to break down more than they should, seeing everything black and even crying on themselves. A way of acting that for them acts as a relief valve, after which they manage to get back on top, being able to see things differently. Perhaps they will not be among the strongest signs of the zodiac but they know how to cope with their fragility, regardless of what others think, which is already an indication of strength.

Cancer – Extremely fragile
Those born under the sign of Cancer are extremely fragile people, to the point of not being able to deal with this way of being. Constantly uncertain about how to act for their future, they are often in need of feedback from others so much that, when they do not receive it, they end up withdrawing into themselves and even pouting. These are people who, faced with difficulties, need the support of others and who struggle to decide on their own. The fear of failure is always at the door and they would be able to never move so as not to make mistakes. A problem is that if they do not choose to face head-on they risk carrying around for life.

Leo – Almost not at all fragile you tend to moments of crisis
The natives of Leo have a strange relationship with frailty. They seem to be strong and resolute people, always ready to act to get what they want and therefore not prone to moments of fragility. In reality, however, their way of going on is when everything goes well. Faced with complications they tend to break down and arrive at real moments of rest that can last for a long time. Their lack of fragility therefore largely depends on the luck they have in life and that if it fails for too long it ends up showing many more weaknesses than one would think. Fortunately, they can always count on the support of others, which they do not hesitate to do and which is often their way out of problems that, otherwise, they would not know how to solve.

Virgo – Fragile
Those born under the sign of Virgo are fragile people and this lack of strength derives mostly from the fear of the unknown and the resistance they always make towards change. Lovers of precision, they manage to feel strong when everything flows linearly, situations in which they can solve even the problems they face. If things start to go in a way that they had not foreseen, things tend to change completely, bringing out a fragility that is unsettling for them and destabilizing for those who considered them much stronger. Theirs is a fragility closely linked to thought. It is not uncommon that following a difficult period they find themselves so tired and tired that they hardly have any more stimuli, coming one step away from depression.

Libra – Not Always Fragile
Libra natives have a strangely fluctuating relationship with frailty. Their sensitivity is linked only to some aspects beyond which they can manage things with extreme tranquility, showing a strength that one would not think they can have. What makes them particularly fragile are often people’s negative judgments, failures, and lost opportunities that they think they can no longer recover. While on the one hand, they have a great ability to go on despite everything, on the other they tend to get discouraged and depressed in an extreme way and it is only the need to live at their best that at a certain point allows them to draw on the strength they have. inside, leading them to overcome the problems that brought them to that state.

Scorpio – Fragile only in the depths
Those born under the sign of Scorpio are known to all as extremely strong, vindictive, and always ready for battle. In reality, they contain a fragility known only to a few and which they tend to hide for life. Fragility is given by their sensitivity but which for them is almost a strength, capable of making them more human and more aware of their limits. If in their hearts they find themselves suffering more than those around them are inclined to think, in life they are always ready to face every situation head-on, fighting for their ideals and the wars that they consider right and which, always thanks to their strength, they almost always manage to win.

Sagittarius – Moderately Fragile
The natives of Sagittarius have a fragility that is particularly related to their need to feel important to others. If friends and acquaintances do not consider them enough, they tend to take it and begin to see everything black, reacting negatively even to problems and situations that have nothing to do with their problem. That said, their frailty is average because they believe a lot in themselves and can fight to the end to get what they want. What matters is that they firmly believe in what they do and that there is an extremely strong motivation to push them.

Capricorn – Fragile in relationships
Those born under the sign of Capricorn show themselves as strong people and this is because, in order not to face problems, they get to overburden themselves with commitments until they get tired beyond all limits. Reality sees them as fragile people and often victims of their ways of doing. In need of feeling part of a group and having good relationships with others, because of their being always busy they end up losing sight of even important friendships. This is a problem of which they are partly aware but which they are unable to address anyway.

Aquarius – Not at all fragile
Aquarius natives are people who firmly believe in themselves and who don’t need others that much. This is a considerable strength, which makes them particularly active when it comes to solving problems. For the rest, they almost always appear exactly as they are, people who think a lot about themselves and who if they have some weaknesses prefer to hide it and face it in private to show themselves to the world full of energy and strength. The same is always evident from their ways of doing.

Pisces – Fragile and strong at the same time
Pisces live on fragility which at the same time is also their strength. They have a strong sensitivity that often pushes them to take on the problems of others and this happens only because, in reality, they are strong people, endowed with great resilience and the ability to face any problem that comes before them with courage. At the same time, they have that moral strength that pushes them not to be ashamed of their emotions, which is why they can also cry in front of a film or an emotionally rich situation. Often mistakenly mistaken for fragile people, they are actually among the strongest of the zodiac because their determination and the ability to fight at any cost derive from the ability to feel true emotions and to dream.