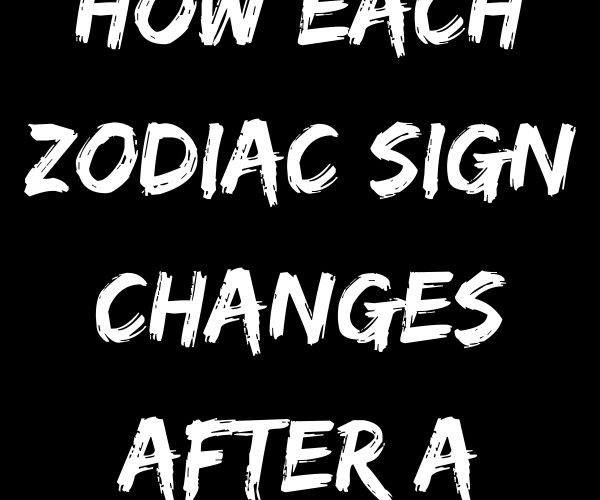 Breakups or any form of significant loss deprive us of the sanity and rationality we may previously have been proud of.

The most important thing you learn is that the pain will pass, that it makes you stronger, and that you are ready for someone who will love you like you deserve.

Heartbreak changes every zodiac sign differently, but change is inevitable for all of us. Read below if you want to know how your zodiac sign handles heartbreak.

For this zodiac sign, it’s important to stay focused on the future. That’s why Aquarians try to heal as soon as possible after a heartbreak.

They find new things to look forward to, or try to occupy themselves with work.

They do whatever it takes just so they don’t think of their former relationship.

One of their most significant traits is that they are independent. In a relationship, they aren’t at all possessive, they give independence to their partners because they like equality.

After they heal, they enjoy reconnecting with their solitude or they might even start to think that they prefer being single, as it frees up their intellectual capacities and gives them more time to dedicate to their interests.

After they experience heartbreak, they go into seclusion. After they get over the initial shock, they may be depressed but they don’t show their suffering or seek sympathy from people around them.

They start going out like never before, trying to prove to their friends and family they are fine.

Exploring new places or people that have been missing out on their company is their number one priority.

In love and relationship, Pisces are blindly loyal and very caring. They are also generous, compassionate and extremely faithful and caring.

This is a sign that is ready for the most romantic and honest relationship.

Because of their personality, they feel pretty shattered and they really need some time to heal. Their heart can easily be broken, and picking up the pieces takes time.

Sometimes, they can also swim away from the problem and ignore their pain. But that only makes the pain last longer and hurt even more once they eventually confront it.

They believe in forever love, and heartbreak can shatter their illusion about “happily ever after.“

This deep emotional pain changes their perspective on love. They start to think that love isn’t for them and it is difficult for them to start a new relationship.

An Aries never shows how much they really suffer, not even to their closest friends or family members. They like to give others the impression of people who do not care too much.

After being heart broken, an Aries may want to train for a marathon or take up spinning to remind others and themselves how capable they are and on how much their ex is missing out.

They don’t do well with pain, so they delay confronting their pain for as long as they possibly can.

Because they lead their lives with such optimism and abandon, any downturn in a relationship can come as a complete shock.

But we should think of them as a phoenix that rises from the ashes and moves on even more ready for anything that may come.

Feeling broken-hearted is a huge blow to the emotional state of a Taurus. They don’t like changes, so they do their best to try to save the relationship.

At first, fear of change stops them from moving on but after the healing process, they become aware that the break has given them many new opportunities that they might otherwise miss.

After heartbreak, they go looking for as much comfort as possible. A Taurus feels anger after a breakup. They usually feel rage, and they are ready to crush everything in their way.

In this process, the main comfort for them is food. In future relationships, they rust their head, not their heart.

The biggest challenge for any Gemini’s love life is to find an emotion that lasts, especially as they get older.

They aren’t used to heartbreak because they don’t like to get too serious in a relationship.

However, Geminis generally want to be anywhere but home after a breakup.

Geminis are social butterflies, and rather than seeking isolation, they tend to surround themselves with people as a distraction when they’re feeling down.

For this flirty sign, there’s nothing a night out with friends can’t fix.

It’s clear to Geminis that breakups are not the best thing in the world, but it is also clear to them that life goes on after heartbreak.

They give themselves just a little bit of time to heal and they are ready to continue with their life. They start looking for someone new very quickly and forget about heartbreak even faster.

Cancer is a very emotional sign, and feelings are the most important thing in their relationships. They gladly show their sensibility to the world without even thinking they might get hurt.

When it comes to heartbreak, Cancerians are very childish. They don’t like negative feelings and start acting like kids who have been refused to buy ice cream.

They start thinking that relationships and love make no sense. That life doesn’t make sense. They feel like the universe is crumbling beneath them.

They don’t think they will ever find another love. Honestly, they are a total mess.  Their physical health is endangered; swollen face, constantly runny nose, and zero appetite.

Fortunately, after some time, after they heal, they start to look at everything differently. Heartbreak is left in the past and they are ready to move on.

Because they are eternal optimists, even a breakup doesn’t stop them from believing in fairytale love.

Leos generally have a sixth sense about all of their relationships, and they’re pretty good at determining who has sincere intentions. That’s why heartbreak can be pretty confusing for them.

It affects a Leo’s ego. Although they are saddened by the loss of their SO, the greater problem is their hurt pride, which makes them do things they may regret later.

They don’t let their ex-partner know that they have been hurt, even if their heart is broken. Leos go out and have fun, posting flawless selfies and trying to prove how much fun they are having.

Afterwards, it’s not uncommon for them to blame themselves for everything, and even go into a shame spiral.

They’re usually very confident, but there’s nothing like heartbreak to cut them down a few notches.

Virgos are one of the most careful signs of the zodiac. Trust needs to be built with a Virgo, slowly, steadily, and patiently. When they are hurt, they completely change.

Every relationship is special and meaningful to them, and they want them to last as long as possible.

A Virgo prefers a stable relationship to having fun. So, when heartbreak comes along, it feels like someone has ripped their heart out of their chest.

Heartbreak leads them to a total shutdown of their emotions and affection.

They feel like no one will ever deserve their love, or that they are going to be hurt every time they enter into a relationship.

They turn cold-hearted. Heartbreak makes them numb and it can take a very long time to find themselves again.

Finding a compatible partner is the main priority in the life of people born with their Sun in Libra.

They hate being alone. Partnership is very important for them, so any break is extremely stressful.

Because they don’t like to be alone, they move into a new relationship relatively quickly, which helps them to heal their broken heart more easily and forget about their former love.

However, this can be very dangerous as it affects their confidence even more.

In moments of solitude they seek comfort in love poetry or another form of art filled with tragedy.

They feel that the only way of getting over a heartbreak is finding new love and getting into a relationship as soon as possible.

Scorpios are passionate and assertive people. They are known for their calm and cool behavior. Once Scorpios fall in love, they are very dedicated and faithful.

However, they enter into a relationship very carefully, because they need a lot of time to build trust and respect for partners.

Once they have finally gotten over the heartbreak, it’s unusual for a Scorpio to turn back to it. However, dealing with a broken heart makes them surprisingly weak.

Once they understand what has happened, they are sad and disappointed and their confidence is dangerously damaged.

They don’t embark on new relationships, except for short ones, based on physical attraction.

After a couple of weeks, they are usually back on their feet, acknowledging their hurt feelings and in full control of their emotions, turning them into lessons learned and not holding any grudges.

They’re pretty easy going and can accept that not everyone will be their forever person, and that they have to experience heartbreak at least once in their life. And they’re always “real” about who they are.

They consider feeling sorry for yourself to be unattractive.

Sagittarius is one of the biggest travelers among all the zodiac signs. They are open minded and optimistic.

Sagittarians tend to get over heartbreak faster than others.

It’s not that they’re not hurting or that they forget the ex quickly; it’s just that they don’t want to hold onto the past or show their real emotions.

They are restless, and after their relationship ends, they go as far away as possible. They try to plan many adventures with their friends.

And that’s because after a breakup, they have a tendency to hide their true feelings and show their ‘perfect’ look to others.

They are very proud and they don’t want to display their emotions.

Instead of spending time healing, Sagittarius decides to start a new adventure in order to clear away all the invisible pains. A fascinating journey helps them forget about their heartbreak.

Capricorns find it painfully hard to express their feelings. They choose to quietly suffer, even if that means they can’t talk it out with their closest friends.

They hate feeling weakness of any kind. They choose unhealthy ways when dealing with their emotional problems.

They try to forget all about their heartbreak so they can get back to being themselves again, even if the heartbreak still haunts them late at night.

Capricorn gets busy or starts making changes to their daily routine. They don’t easily embark on a new relationship because they need some time to start trusting people again.

They start changing their traditional views on love and relationships.

It is hard for them to still believe that you can be with one person for the rest of your life when they experience a tough heartbreak.

Heartbreak is the greatest pain we can feel. It’s not just emotional pain, it affects our physical health also.

You shouldn’t be ashamed or embarrassed of your emotions. You are allowed to cry, to scream, and to do whatever you need to do to feel better.

You have to hang in there and no matter what, don’t give up on love.

Time heals all wounds, but each heartbreak leaves a scar. Don’t be sad about it because it doesn’t have to be a bad thing.

Those scars should stay there to remind you how life tried to break you, but you were stronger than it.