When rejected, some signs no longer think clearly.

When their feelings are hurt or upset, they often act without judgment.

Nobody likes to be rejected, but Aries doesn’t react well at all when he goes through this situation.

He tends to be very impulsive. If he is abandoned, he will most likely confront his former partner in public in the most humiliating way possible. He tends to be somewhat insensitive to the feelings of others, especially if he has been hurt.

Taurus takes rejection too personally, even when it’s not personal at all.

Rejection has a strong effect on him and he tends to treat himself. He may drink too much, eat unhealthy foods in large quantities, any such examples that he thinks might make him forget. If Taurus feels too bad, he can become completely unmotivated and lazy, staying home and crying for pity.

Usually, Gemini is not so bothered that they are rejected and I think that the one who rejected them is an idiot, at least that is the image they want to project.

However, it is clear that they are affected by being left out, sometimes leading to verbal confrontations or causing all sorts of dramas.

If he is abandoned, Cancer will continue to text him and call his ex-partner, hoping to remind him what an incredible person he is.

Cancer can be pessimistic and if his partner does not get along with him, he will become overly sensitive and will start imagining all sorts of things that have been done against him without any proof that they have happened.

Rejection is an unknown term for a Leo, the usual zodiac sign to always get what he wants.

If Leo could view rejection as a lesson, then he could learn much from this experience. However, if he cannot see the benefits of rejection, he will become sullen and may act in a passive-aggressive manner by refusing to admit that he is hurt.

When Virgo is rejected, she tries to prove to the person that she was wrong to do so.

If her partner has left her, Virgo will become more active on social networks, making it seem that she is not mourning the relationship, but that she is having more fun than ever.

If Libra is rejected, it tends to worsen her condition and aggravate her pain.

Libra will read old messages, letters and turn her attention to the gifts she received from her ex-partner. She will remember the good times, and the moment she finishes re-examining the relationship, she will feel worse than ever and will be completely convinced that she will never have a relationship again. In the case of professional rejection, he will certainly look for reasons to believe that it was the best possible job and that he will probably never be able to get it.

Scorpio does not react well when rejected. It took him so long to gain confidence in him that he was rejected and all his fears came true.

The question is: Will Scorpio hide his feelings or express them in revenge? Probably the last option suits him better. He follows the principle that if he suffers, let others suffer.

Sagittarius sometimes handles rejection well, especially if he has not invested too much.

But in other cases, it doesn’t. It’s not that he’s not mature, but if he feels too hurt, he can act childish and do or say things that seem worthy of a high school student’s behavior. It is not excluded to reveal intimate things about other people in the idea of ​​putting them in an awkward position.

Capricorn is hardworking and practical, so when rejected, he works even harder.

He forgets to take breaks, does overtime, and never takes a vacation. He works so hard that his colleagues and loved ones worry and try to show him that work is not the only positive thing in his life. However, the most reckless thing he does when he is rejected is to swear that he has finished with love or any kind of commitment.

While Aquarius will try to make it look good and not affected by rejection, it is destroyed inside.

The more intense his feelings become, the more his hatred for the person who hurt him will increase. He will block it on all social networks and will try to eliminate it completely. With this attitude, he hopes that the person will think that he does not care about his life, business or future relationships. It’s very resentful, a trait that comes to the surface when rejected.

When Pisces is rejected, they will begin to think that they were not good enough, beautiful, smart, or loving.

For them, rejection is a way to blame. It will be difficult for them even to get out of bed, imagine that they will be happy again, or do anything creative. The fish will feel like they have failed, everyone will seem happier and more capable than they are and it will take them a long time to recover. 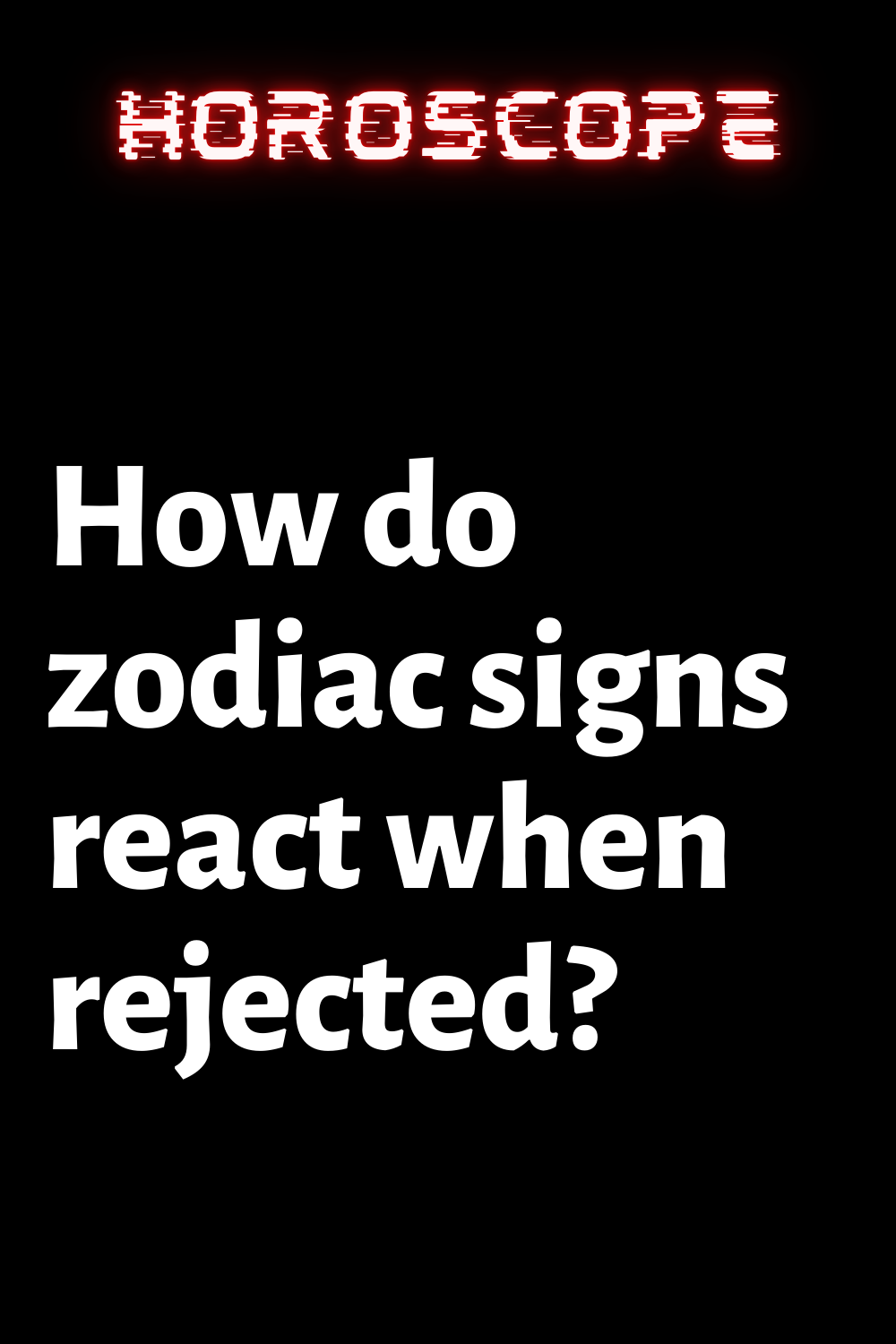