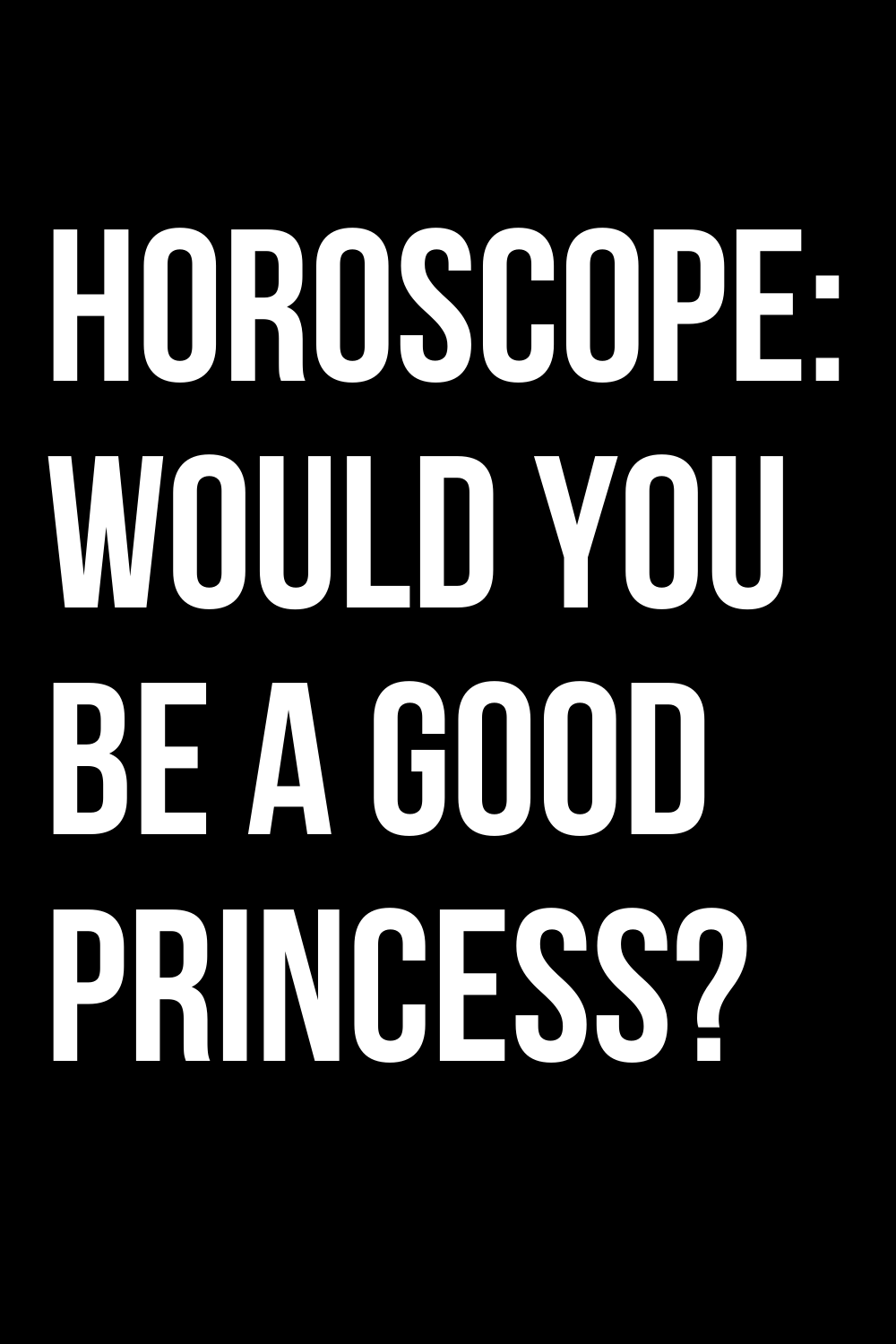 HOROSCOPE: WOULD YOU BE A GOOD PRINCESS?

Do you have a talent for being a princess? Here is the opinion of the stars.

How many times, as a child, have you ever wanted to be a princess? Generally it is one of the most frequent dreams you have, partly because you are used to seeing beautiful princesses who have everything and who seem destined to always find great love and partly because the idea of ​​living in dream environments and being able to wear elegant clothes is always quite pleasant. Beyond the image that you can have as a child, however, the life of a princess it is not all pink and flowers but made up of rules and sacrifices that not all of them can be suitable for enduring. Today, therefore, we will try to play a little with this idea, trying to find out whether or not we are cut out for such an exclusive role. Based on the character and temperament of each of us it is in fact possible to predict the reaction to certain situations. So, after seeing if we have the soul of a warrior , today, thanks to the stars, we will find out if we are cut out for a princess life.

Were you born to be a princess? Here is the opinion of the stars

Aries – Absolutely not
As a princess you would be so rebellious as to freak out anyone who has anything to do with you. An analysis that will not surprise you at all if over the years you have realized that you can only identify with those super rebels or always fleeing from their role. Of course, a life in luxury is definitely tempting, but unfortunately you don’t like too many rules and that etiquette that you find too formal and absolutely to be revised. Better to dream of this role from afar and live your life with freedom and as you like best.

Taurus – You have no shortage
of features Your character makes you a eligible princess. The stiffness of mind you have when it comes to new things, your love for things done right, and always kind ways make you fit enough to play a simple role. Sure, there would be a little too many corners to smooth out and probably, over time, you wouldn’t feel so comfortable, regretting your life as before. Among the various signs, however, you are undoubtedly led to cover a similar position, albeit with the due exceptions that you would be forced to make those around you accept. Are you sure you want to try?

Gemini – Not at all
Rules, routines, etiquette … there are too many things to bear and if you think that boredom of certain situations is added to them, it is clear that the role of princess does not suit you at all. Maybe in a century or two or in a reality where you can live by your own rules, things might be different. Right now, however, the impositions would be such as to make you an unhappy person. Much better to live for the day, giving rise to the carefree and joviality typical of you.

Cancer – Maybe, for a short time …
Your ways undoubtedly make you fit to be a princess. Even your way of throwing tantrums and expecting that everything is always as you wish it somehow makes the general idea that you have of this particular role. Yet, not all that glitters is gold and over time it would be a difficult situation to tolerate and that would not make you happy. If I could be for a weekend or just for a month, however, things would be different and certainly take away the whim of it would like a lot.

Leo – Are you sure you don’t want to be a queen?
More than the role of princess, the role of queen certainly suits you. Your ability to shine in all situations makes you the perfect person to reign on the throne. Provided, however, that there is no one above you. Otherwise your life would be really difficult as well as that of the rulers. Seriously, you definitely have the ambitions of a princess and would know how to handle it. Your desire to get noticed, however, in some ways, is higher than what such a title could give you and the obligation to follow certain rules could be uncomfortable for you. In other words, this is a difficult position that should be reasoned with due caution before being taken.

Virgo – This is a role you would find boring
. For someone like you, who is so poised and always with their head on their shoulders, the role of the princess is likely to be too boring. Your character, in fact, would lead you to always be loyal to duty, to the point of not having a single moment of leisure, which over time would make you hate what in your dreams is something very different. Better to continue dreaming, therefore, and leave the duties to others. You already have yours that abound.

Libra – This Is A Perfect Role For You
Let’s face it, with your elegant manners, penchant for all things beautiful, and that hint of vanity that never hurts, you’d be a perfect princess. The calm you have in dealing with people and the most complicated situations also makes you a person who could handle this role. Of course, every now and then some rules may come back to you but apart from that, you would feel perfectly at ease and would be admired by everyone. If you ever meet a prince, then …

Scorpio – It’s a Role You Could Support
True, sometimes your absolute manners and need for justice could make this role quite difficult, especially in realizing that despite being in the position you may not always get what you want. That said, you would still be able to fill the role of a princess, getting some success and looking like she was born to be one.

Sagittarius – Better focus on something else
The princess life is not for you at all. Your need for freedom and the desire to always go against the rules and create new ones modeled on you, make your zodiac sign one of the least suitable to fill this role. Much better to think about the next trip to do and focus on the many activities that you could put in place precisely because of your not having ties or duties towards someone.

Capricorn – It’s too stuffy a role
Living as a princess might be enjoyable in your dreams but much less so in everyday life. In fact, your nature leads you to always keep yourself busy and to have more commitments than hours free to spend. All things incompatible with real life which very often is made up of labels and rules that you would not like to have to follow. Much better to be free to organize your commitments and manage your time as you see fit, without others having their say.

Aquarius – It’s a life you only half-enjoy
it Let’s say that in some ways you could be a princess happy with your position. The confidence with which you know how to live moments of absolute quiet or solitude make you suitable for this role. However, there are also other nuances that instead go against your way of being. An example? Having to deal with others, having to show yourself often in public, etc … All things that in the long run would lead you to prefer a normal life and certainly more serene and relaxing.

Pisces – It’s a life that suits you a lot
Your calm disposition and not at all shy about having to follow the rules makes you a perfect person to fill the role of princess. It is a position that really suits you and that thanks to your kind ways and the empathy you always show towards others would simply make you perfect. Perhaps from time to time you would suffer a little from the loneliness that can sometimes accompany this role but it is a detail that you could easily get around or with which you would be able to gain due confidence over time.