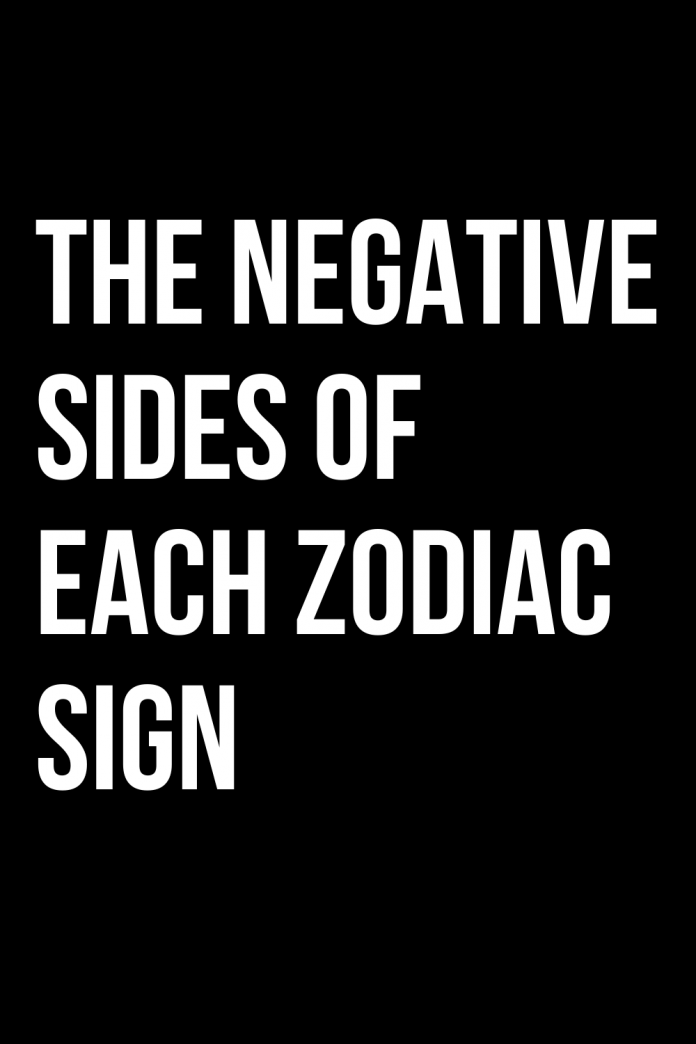 Each zodiac sign has both positive and negative characteristics that make each person who they are, for better or for worse. These characteristics depend on many factors such as the experiences lived and among these there is the influence that the stars have on the various signs. Since almost everyone knows their qualities but struggles to recognize the defects, today after having seen what are the strengths and weaknesses that each zodiac sign has at work and how the various signs of the zodiac respond to anxiety, we will find out what are the negative sides. of each sign. To grasp even the smallest nuances it is advisable to check the profile of the ascendant which will offer a broader view of each sign. The downsides are only part of the person and discovering and recognizing them as true can be a good way to improve yourself or to laugh at them. To you the choice.

Horoscope: here are the negative sides of the various zodiac signs

Aries – Impatient and Arrogant
Those born under the sign of Aries, perhaps also due to their being hyperactive, tend to be impatient in every respect. This often makes them quick-tempered and easy to get nervous. For them, every untapped moment is a waste of time that drives them to try to change things. Under pressure, they can be arrogant towards others and if they enter into the competition they come to give the worst of themselves. Excellent leaders, sometimes tend to overestimate themselves by forgetting the needs of those around them. For this reason, it can often happen to find yourself arguing with them, sometimes even without result because if they put something in their head they are so stubborn as to remain firm in their position even when they are wrong.

Taurus – Lazy and stubborn
One of the main characteristics of Taurus natives is laziness which goes well with their desire to have everything without making the slightest effort. Often messy, they like to live in their comfort zone without worrying about how they are viewed from the outside. What matters to them is having everything they consider important and that guarantees them a life full of abundance and moments to fully enjoy both alone and with the people they love. Unfortunately, they almost tend to demand all of this and the idea of ​​having to earn everything is not part of their way of seeing things that, stubborn as they are, will hardly change.

Gemini – Dual and not very concentrated
Those born under the sign of Gemini are, as we know, particularly dual. This wouldn’t necessarily be a fault if it weren’t for their rapidly changing moods when they find themselves switching from one thought to another. A situation that arises early can often make those who are not familiar with it uncomfortable. In addition, in these moments, they tend to be nervous and not very focused, so absorbed in themselves that they hardly have time to pay attention to those around them. For many, they are also a bit immature and unaware of their limitations.

Cancer – Hypersensitive and easily irritable
Cancer natives have a very difficult temperament to treat. Sensitive as few could burst into tears at any moment, freaking out about things no one could ever have foreseen. Often silent they tend to make mental films that rarely correspond with reality and which therefore lead them to reactions that are impossible to decipher. Among other things, when they feel betrayed in some way, they end up sulking, getting irritated by every little thing, and even fighting with those in front of them, regardless of their role in their affairs.

Leo – Self-centered and too self-absorbed
The natives of Leo are people who almost always have only one priority: themselves. When they are among the people their prerogative is to get noticed to always be the center of attention. Often selfish and too absorbed in themselves they never really listen to those around them and when they do they always try to bring the topic back to themselves or tracks that they consider being of interest to them. For them, anyone who can overshadow them is a sort of enemy and for this reason, they tend to keep close to people who they consider excellent wingmen or shoulders but never completely independent and able to operate without their presence.

Virgo – Pessimistic and rigid
Virgo people are hypercritical and precise enough to drive anyone who has anything to do with the crazy. Always ready to judge, they can notice a defect even among a thousand qualities. At the same time, they are extremely pessimistic and always ready to mourn if things go wrong. They are very precise in everything they do, they also expect the same from those around them and often come to almost demand it by putting themselves in a rather uncomfortable position, especially if others do not have the same vision of things as they do.

Libra – Undecided and in need of approval
One of the most evident characteristics of those born under the sign of Libra is indecision which sometimes reaches levels such as being among the negative aspects of the sign. This is combined with a sometimes excessive need to feel approved by others, which leads them to act strangely and take it out if they do not receive the attention (or compliments) that they deemed right for them. Moderate and calm by nature they can sometimes be insincere or cold even if in reality they can feel emotions but are less likely to express them.

Scorpio – Vengeful and demanding
The natives of Scorpio are famous for being highly vengeful. When they suffer a wrong they do not even remotely think of forgiving it but prefer to immediately dedicate themselves to what they do best: revenge. Added to this is their being strongly demanding towards others, which leads them to meet easy disappointments that cause them to have conflicting feelings and that do not go well with their need to always get justice. They would be able to remember a wrong suffered even for several years.

Sagittarius – Presumptuous and too direct
Those born under the sign of Sagittarius have an opinion of themselves that is too high, so much so that they are often arrogant and opinionated. Often inclined to judge others, they have a way of doing things that are too direct that leads them to hurt people without even realizing it. Convinced that they are doing the right thing, they consider themselves sincere but they are so tactless that even a simple sentence turns out to be a free slap. Finally, they are unwilling to understand others but, convinced of the contrary, when they come up with an idea they tend to rely only on that without ever doubting.

Capricorn – Rigid and alarmist
Capricorn natives are always anxious because they have a very personal and often alarmist view of things. They can see danger in every corner and this often leads them to be tense and nervous. Among other things, they have a rigid mentality with which they find it difficult to compromise and which often leads them to appear too firm in their positions. Combine this with the fact that when they focus on something they seem to have eyes only for that the result can be devastating, especially if what they focus on has aspects that are only negative in their eyes.

Aquarius – Quiet and aloof
Aquarius natives are known for being extremely quiet and needy of space, which makes them often on the edge of unsocial. This is combined with a detached attitude that they have with everyone and which can sometimes lead to misunderstandings, especially when failing to express their involvement in any way they end up giving the idea of ​​not having the slightest interest in others. A way of doing which they do not care about and which in the long-run risks making them lose even important affections.

Pisces – Imaginative and abstract
People born under the sign of Pisces have a great imagination. Sometimes, however, this ends up becoming so extreme that they almost lose touch with reality. Considering that they are often particular people and with a very personal vision of things, this way of life can lead them to be impractical where there is a need to think well. They, therefore, need greater rationality and to channel in the right way the fantasy they certainly need but which must be transformed into an added value and not into the characteristic that identifies the most.