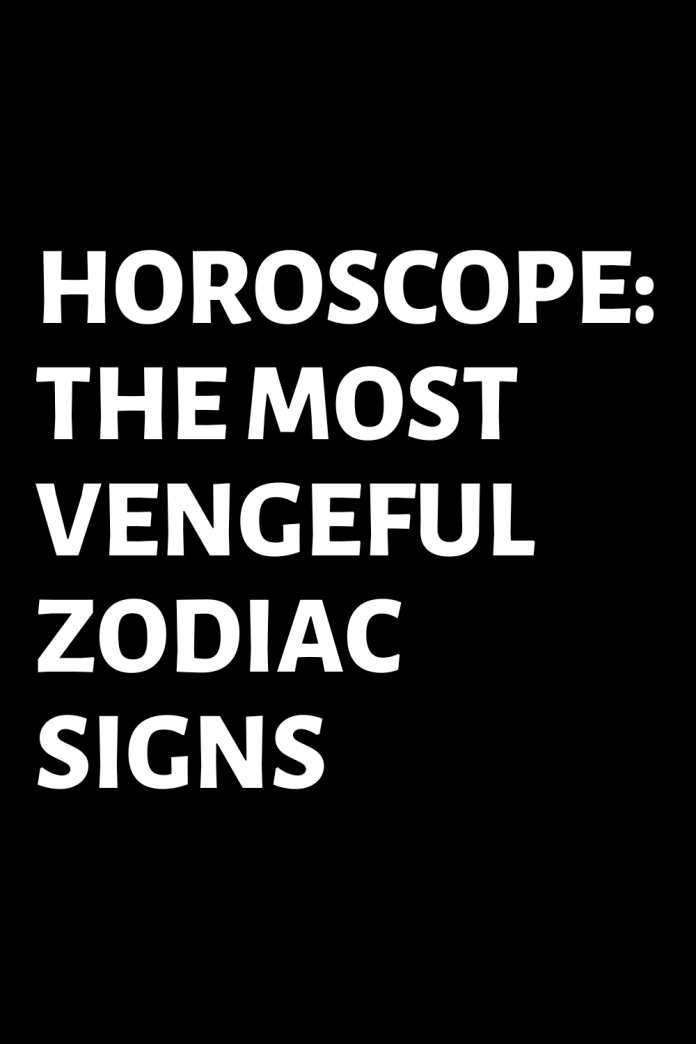 Let’s discover the most vindictive signs of the zodiac.

Revenge, as we know, is a dish that is best eaten cold. A saying that makes many smile but which for those who are vindictive by nature represents a reality to which to refer whenever the opportunity arises. There are people, in fact, who manage to wait even for years, until whoever has dealt the blow does not think it is all over. Just then, at the earliest opportunity, they will be ready to serve their revenge, playing on the surprise effect and making it even more meaningful. A rather disturbing picture with which, however, sooner or later, we always find ourselves having to deal. Because even if you never think about it, there are many more vengeful people than it seems and many times they manage to mask it very well. A real problem when they resent something they believe they have suffered but that the other has not actually committed.
Well, since revenge is also an aspect that concerns a lot the connection between stars and zodiac signs , today we will try to discover together which are the most vindictive signs of the zodiac of all, so that we know immediately who we are dealing with. So today we will try to identify the signs from which to watch us when it comes to possible revenge and to do so, we will draw up a sort of ranking, from the most “harmless” to the most dangerous.

The 4 most vindictive zodiac signs of the zodiac

Taurus
The way of doing those born under this sign is simple, if they feel they have suffered an attack they close in on themselves, raising their defenses and starting to counterattack. Talking to them, in these cases, is completely useless. Better to let them boil and wait to finally see them more serene. If, on the other hand, you do not want to suffer any kind of “aggression”, the best thing to do is to always try to clarify yourself, especially when they start to show more annoyance than they should. That’s when they start thinking about the best way to get it paid. And once you’ve made up your mind, getting him to change his mind will be virtually impossible.

Virgo
In third place is the sign of virgo whose rigidity is now well known. Habitual, set with the rules and precise beyond all limits, those born under this sign tend to be rather touchy and to see wrongs even where there are none. For this reason they tend to harbor a strong resentment that can come out at any moment, either in the form of a verbal outburst or, even worse, in the form of revenge. In the latter case, they will not make their intent known, simply serving you tit for tat, certain of being right and not having to give any explanation, even if several years have passed since the wrong they think they have suffered.

Pisces
Those born under the sign of Pisces are particularly empathetic and sensitive. For this reason, one word too many can hurt him more than you think. An evil that marks them deeply and continues to hurt even after many years. For this reason, even if it is basically a peaceful sign, the possibility of revenge with them is always around the corner. Until the wound has healed (and sometimes it can take years), for them the wrong they have suffered will still be fresh, which is why revenge will seem the most natural thing possible.

Scorpio
And here we are in first place with the sign of the zodiac which is by far the most vindictive of all. For a wrong suffered it could hold a grudge even for years, continuing to feed the flame of revenge with the mere memory of what happened. For this reason he will try to give back at least the same amount of pain that he thinks he has suffered and it does not matter if he will need some time to wait for the right opportunity. The famous saying that revenge is a dish to be served cold, in fact, seems to have been specially created by them.