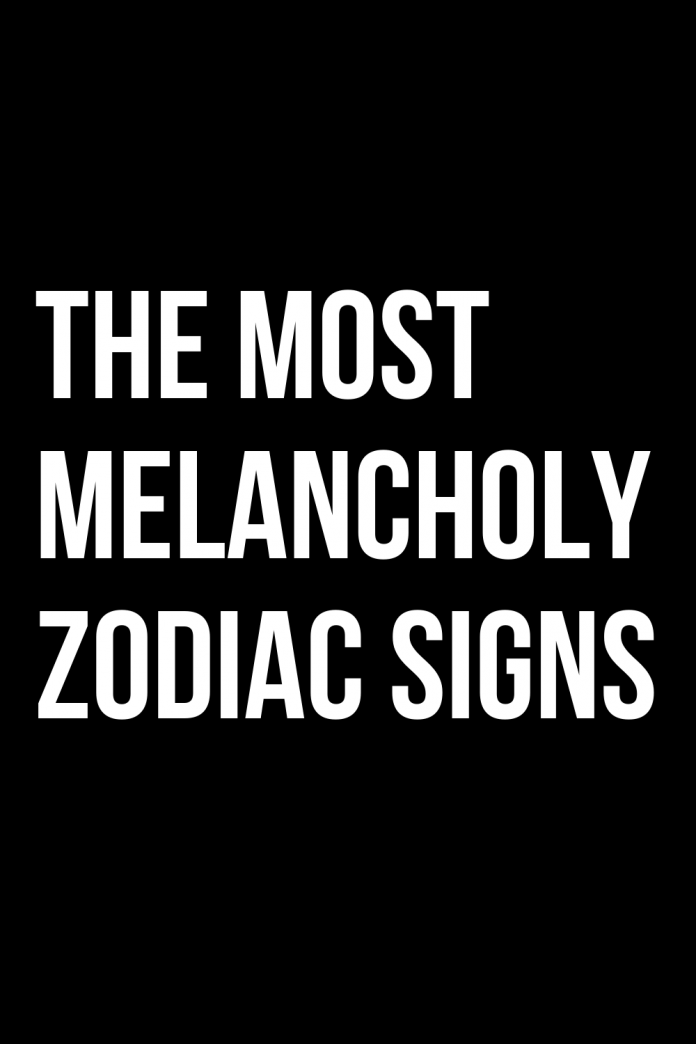 Find out which are the most melancholy zodiac signs.

Melancholy is a difficult feeling to control . It arrives suddenly and involves those who try it, to the point of leading them to isolate themselves for a while or, on the contrary, to try to fight it by trying every possible way to distract themselves. Whether it is linked to a particular moment or to the tendentially melancholy character of the person, it is a strong emotion that is often also influenced by the stars. Today, therefore, after having seen which are the most correct signs of the zodiac and if and how much we are undecided , we will try to understand how each sign experiences melancholy and which ones are more easily involved.

Horoscope: Zodiac signs and melancholy. Here is the opinion of the stars

Aries – Not at all melancholic
Being people of action, those born under the sign of Aries are not used to letting themselves go to melancholy. Indeed, when they feel it is coming, they prefer to engage in something like a good run that frees them of all thoughts and gives them the adrenaline to face every thought. Sometimes theirs is also a way to protect themselves and not face certain situations, in which case they should instead try to analyze themselves better in order to get to know each other and find different ways to deal with the problems and situations they do not like.

Taurus – Tendentially inclined to melancholy
The natives of Taurus, being particularly quiet people, can sometimes find themselves experiencing moments of melancholy. This leads them to stop and focus on their thoughts to the point that they forget who they are around. It is their way of rationalizing and quickly resolving the moment which, while making them deeper, they never welcome with particular joy. Certainly, however, they do not chase him away, making themselves witnesses of every emotion felt in order to understand what it depends on and if there is a way to make melancholy turn into action to change what is wrong. A way of being laid-back and that often leads them to really feel better and to resolve conflicts that otherwise would risk recurring over time.

Gemini – Melancholy in Their Way
As with almost everything that concerns them, Gemini tends to feel melancholy in a different way than others. When this emotion takes them they are usually in their moments of boredom, those in which they let themselves go to despair, opening the door to emotions of all kinds. Thankfully, these are short moments that tend to go by quickly. Indeed, the slightest distraction is enough and any thought is set aside for what is new.

Cancer – Often Melancholy
Those born under the sign of Cancer do not like moments of melancholy, yet they find themselves experiencing them very often. This happens because they are basically great nostalgics who insist on living on memories and this way of doing inexorably leads to moments of melancholy due to what is no longer there or that has changed in a different way than we wanted. Their being melancholy often makes them sad and eager to have company from the right people with whom they will try to distract themselves without going into details but asking to go out or to let them have fun. A strange way of acting but that those who know them can understand and almost always indulge.

Leo – Almost Not Melancholy
The natives of Leo are too busy with their own affairs to indulge in melancholy. The frenzy of work and the desire to do that distinguishes them in every moment of the day makes them people almost unable to stop and think sadly about the past moments. In the same way it is very difficult for them to regret or want something because when this happens they immediately put themselves in a way to fill the void and reach the goal.

Virgo – Not Melancholy
Although melancholy tends to knock on the door of Virgo natives quite often, their being rational leads them to be closed to such feelings. If they let themselves go it is only because in the throes of fatigue or in very particular moments and in which they feel they can allow themselves a moment of reflection and thoughts that otherwise they would not conceive at all. Their way of acting is therefore always contrary to melancholy and aimed at driving it away. When he arrives and they choose to let them in, however, this becomes total to the point of coming to depress them even for several days.

Libra – Melancholy but in a healthy way
For those born under the sign of Libra, melancholy is a feeling like many others that must be lived and analyzed in order to understand what it leads to. For this reason, while supporting it, they know when to stop and move on. This means that their way of being is always balanced and able to overcome even moments of crisis. Their melancholy will therefore always be more therapeutic than casual and this is because they are able to harbor it for days just to wait for the moment they feel most suitable to let it emerge and metabolize it and then leave it freely behind.

Scorpio – Quite melancholy
Perhaps many would not say this but the natives of Scorpio are quite melancholy. The point is that they tend to experience certain emotions in a solitary way, never confiding in others and avoiding making known what are weaknesses for them. This does not mean that their way of feeling is still very acute, so much so as to make them even fragile in certain situations. Fortunately, even in moments of greatest melancholy they manage to remain lucid and remain present in the eyes of others, so much so that they are able to keep their real state of mind well hidden. A situation that, even if it doesn’t seem like it, generates a certain amount of stress in them.

Sagittarius – Almost not at all melancholic
It is true, sometimes those born under the sign of Sagittarius tend to let themselves go to melancholy thoughts, however these are mostly linked to memories of beautiful moments, thus bringing with them a pleasant and soaked atmosphere. of mostly positive emotions. Theirs is therefore a melancholy that is not too deep and therefore does not create any particular problems for them. The rare times when they hear something more they tend to escape it, perhaps with a trip or focusing on something that is able to distract them until the problem is solved.

Capricorn – Melancholy Only When They Are Sad
Capricorn natives tend to melancholy when they feel sad. Otherwise they are used to thinking staying focused on the present or thinking about the future. When melancholy comes, then, it is often in a sad form and capable of making them sick and bringing them down. This happens because it catches them mostly in moments of weakness and when they are therefore lacking the necessary resources to respond in the correct way. Fortunately, this is something that rarely happens to them, since they are always so busy that they never have time to think about anything other than the many tasks to be done.

Aquarius – Not melancholy
Those born under the sign of Aquarius are almost immune to melancholy. If they let themselves go to memories, they do it without too many emotions, limiting themselves to remembering both good and bad moments but without any other kind of involvement. This depends on the security they have in themselves and on the awareness that not being able to change what has been for nothing, it is necessary to think again over and over again. A mostly positive way of dealing with life or one that is such for them that they are always a little out of line when it comes to emotions or sensations.

Pisces – Always melancholy
Pisces live with the melancholy that is part of them. A little for sensitivity and a little for the empathy that distinguishes them, they end up taking on the melancholy of others who often feel almost like it was theirs. Fortunately, their being abstract and dreamy allows them to grasp the romantic side of these emotions, without falling into the vortex of depression or sadness for what has been and will no longer be. A way of doing that comes naturally to them and of which they have almost no control and which, precisely for this reason, is difficult to understand for those close to them.