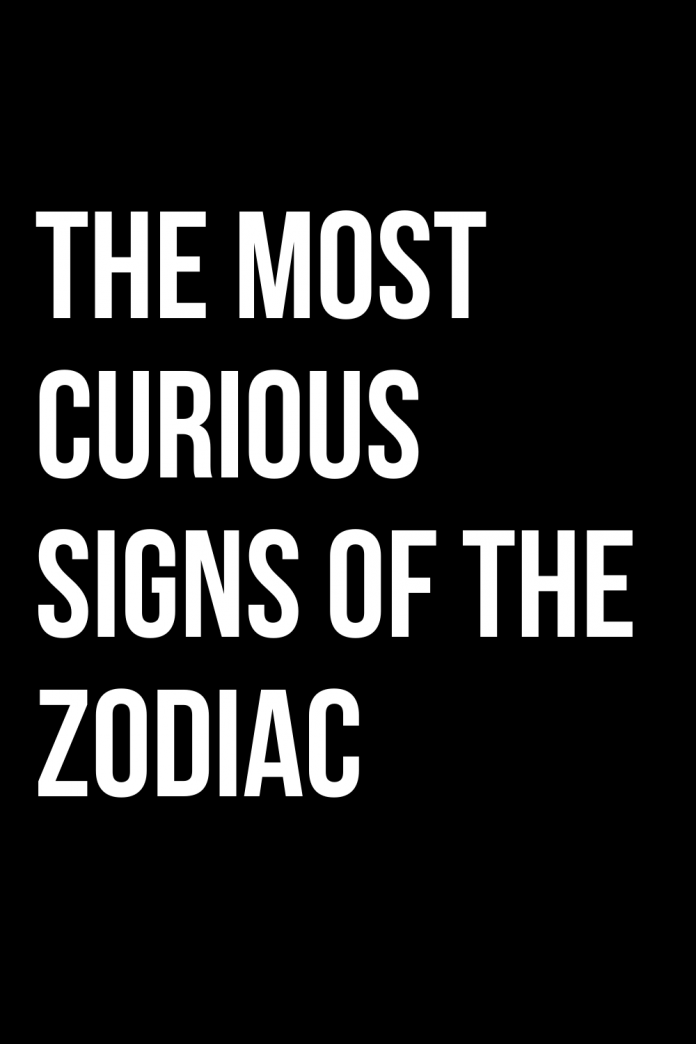 Find out which are the most curious signs of the zodiac and which are not at all.

Curiosity is a trait that affects many more people than you think. While it is true that there are people who prefer to take care of their garden, completely ignoring what others do or think, on the other hand, there are many more people who are always trying to discover the secrets of those around them and who are they are curious about everything they see. Curiosity
is varied and can concern different aspects of a person’s life, in any case, it is a need for knowledge that many feel so strongly that they cannot resist. And since it is one of the many aspects that is influenced by the stars, after having seen which are the zodiac signs that always complain and what is the most suitable spring destination for each zodiac sign, today we will discover which are the most curious zodiac signs and which ones are not at all. As often happens, since this is an aspect closely linked to the way of being, it is advisable to also check the ascendant of the person on whom you want to look around.

This is how curious the various signs of the zodiac are

Aries – Quite curious
Those born under the sign of Aries are people who are curious about everything that surrounds them. They try to capture every moment of life and to do so they often question the world around them. In the same way, they ask questions about the people they meet and who become part of their life. Their curiosity is mostly linked to others, to their inclinations, and, needless to say, to the secrets they can keep. They are therefore people who love to do the business of others and who, if it happens to them, do not mind asking questions that are sometimes uncomfortable.

Taurus – Very Curious
The natives of Taurus are among the most curious signs of the zodiac. For them, everything that does not appear clear must be studied in-depth and this goes from people to facts unrelated to them to entire subjects of study. If something intrigues them they tend to want to deepen it until they feel they have learned everything they could. Sometimes they stare so hard that they seem almost obsessed with what intrigues them at the moment. The truth is that once the big question mark is exhausted, they quietly move on to something else almost without caring about the previous object of their interests. An aspect is difficult to understand for those who have recently known them but that friends and relatives who have been dealing with them for a long time know how to recognize them all too well.

Gemini – Extremely curious
Gemini has an innate and insatiable curiosity. They are interested in everything that surrounds them and always try to deepen their knowledge about things, facts and people as much as possible. When it comes to others, they inform themselves without the slightest problem, even going so far as to ask questions to those directly involved. The same is true when it comes to events that occurred while they were not present. Their curiosity, however, is not limited to this. They can spend hours experimenting with make-up combinations or combinations in the kitchen until they get to disassemble an object to understand how it is made. Bright and sharp, they have a great power of observation and tend not to stop until they consider all their questions answered.

Cancer – Not very curious
Those born under the sign of Cancer are sometimes curious about the people around them. Theirs, however, is more a need for control which translates into the constant need to find out about what the people they consider dear are doing. That said, they don’t have a real curiosity about the world but prefer to stay on their own, taking care of their things and ignoring those around them. It is a way of doing things that often those who frequent them find difficult to understand because at first, they seem like people who are strongly interested in everything that surrounds them. The truth is that theirs is usually a superficial interest, tied more to observation than to the analysis of facts.

Leo – With fluctuating curiosity
Leo natives are active people who are always interested in the world around them. Their main interest, however, is aimed at what can serve them or the people who are most dear to them. Taken as never before by their own life and the desire to be noticed, they do not have a real interest in the lives of others but they like to get to the bottom of everything they believe can be useful to them. Theirs is therefore a fluctuating curiosity that often confuses those who do not know them well and tends to get an idea only to see it immediately afterward denied by their way of doing. One thing they are also aware of but they don’t care that much.

Virgo – Almost not at all curious
Those born under the sign of Virgo are not all that curious. They prefer to take an interest in what concerns them and think about themselves. If they are at the center of a conversation, then they can also get curious and ask questions but they will never go into depth personally because in their free time they feel they have much more important things to do. At the same time, although attracted to the world around them, they hardly ever ask complex questions, preferring to analyze what they can easily get to. An aspect that is part of their being extremely practical and rational and unwilling to disperse energies.

Libra – Moderately curious
Moderation and curiosity are two of the characteristics that concern the natives of Libra. Their love for the world around them leads them to be curious too. Theirs, however, is more a need to know, to dig deep, and to grasp the essence of things. They are people who always like to keep informed and who never refuse to be able to converse about something specific because they know that often just by talking they can get to know various information. Theirs is a way of doing that may appear superficial but which instead allows them to deepen various aspects of life, leading them to know the world in a way that is often so complete that they have many more things to say than one might think.

Scorpio – Curious in their way
Those born under the sign of Scorpio are curious people in a way that is often difficult to understand. Attentive observers ask themselves many questions about the world around them but they tend to want to deepen only on what catches their attention. Often these are things that are difficult to imagine and that they would not be able to foresee. Little interested in the facts of others, if attracted to a particular aspect they can decide to investigate, stopping only when they believe they have had an answer. They are particularly attracted to everything mysterious in their eyes and little to things that generally tend to intrigue the rest of the world.

Sagittarius – Only Curious About Other People’s Facts
Sagittarius natives are not essentially curious people. But he likes to watch the world change and the people who relate to each other. On the latter, at times, they tend to become particularly curious, to the point of wanting to investigate what they do not understand. When this happens they can go on for days wondering, until a new stimulus catches their attention. They know how to be very fickle about what concerns facts or people that they consider external to their life. Sometimes it can be said that their curiosity is more a form of escaping boredom that sometimes, especially when they haven’t traveled for a while, tends to take possession of them.

Capricorn – Not very curious
Those born under the sign of Capricorn are people who tend to mind their own business and who even when it comes to things close to them, avoid asking questions unless they are personally involved. Occasionally, however, if freer than usual or particularly relaxed, they tend to see things with a different spirit, becoming intrigued to the point of wanting to know more. When this happens it is easy to grasp the difference also because they often tend to ask for help from those close to them, to be able to solve their momentary enigma as soon as possible and without too much effort. After all, they know very well that it is only a momentary thing.

Aquarius – Not at all curious
The natives of Aquarius are not at all curious people. They are interested in looking at their backyard and trying to live as best they can. Moreover, being little interested in social life, they rarely have the way to ask questions about others because they tend to believe what they are told more than enough. Of course, if it comes to study subjects then they too can have a kind of curiosity. However, it is more of academic interest which they, therefore, face with a decidedly different spirit compared to that of those who feel curious about something.

Pisces – Only curious about a few things
Pisces are people who love to observe the world and who feel the atmosphere that surrounds them in the round. For this reason, they naturally tend to a sort of curiosity which is however linked only to some things and which they tend to manage in a way that is often different from how others would do. Theirs is more an artistic curiosity, aimed at grasping the essence of what they have around them or discovering the reason for certain phenomena. If it is about what is around them or the people around them, things change completely also because they are often so distracted that it is very difficult to grasp ideas for which to be curious.