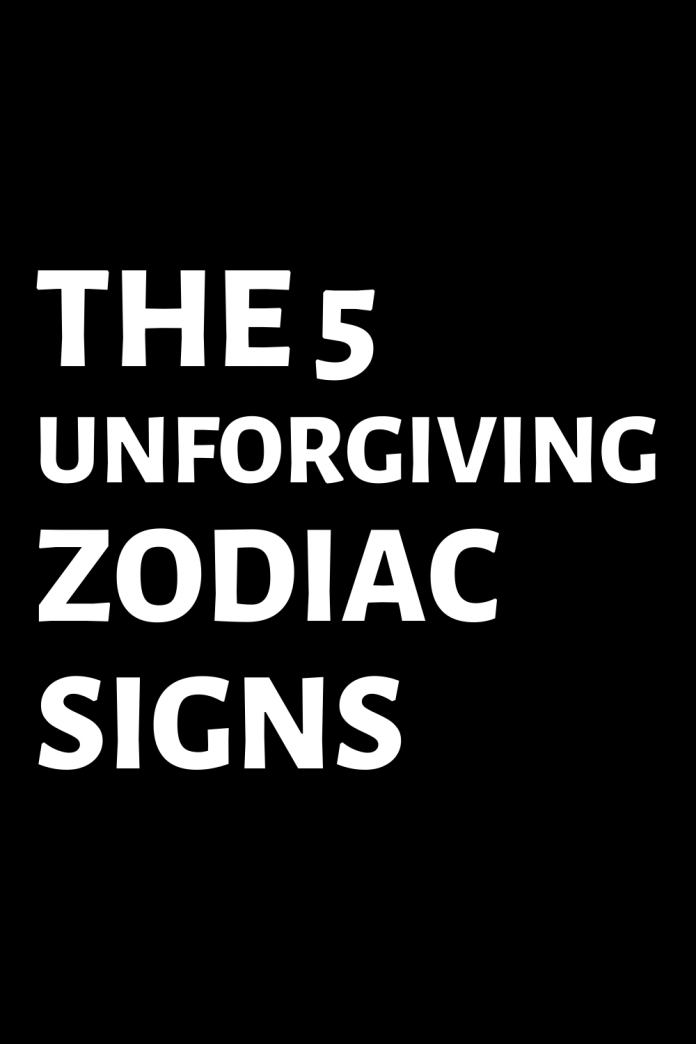 Find out which are the five zodiac signs that are best never to piss off.

When it comes to forgiveness, it is difficult to draw a line that can clearly and precisely separate right from wrong. Each situation hides different implications and, as we know, reality always has at least two sides. Generally, those who carry out a certain action almost never think they are in the wrong, which is why in the event of a dispute or even just a simple dispute, understanding where the reason lies is really difficult. What is certain is that beyond the mistake made , not everyone has the same ability to forgive others. There are those who manage to put everything behind them, saying how they think and dismissing the whole thing, there are those who always tend to turn the other cheek and finally those who just can’t forgive, letting anger and frustration grow exponentially thus fueling an anger that slowly often ends up turning into hatred.
Forgiveness is by no means a simple choice, it implies the desire to understand the other person, to put oneself in her shoes and to step aside a little by accepting the pain received. It is therefore easy to imagine that this way of doing cannot belong to everyone. In fact, there are people who more than others are unable to forget and this attitude, at times, can also be influenced by the stars. Thus, there are zodiac signs that more than others struggle to see things from a perspective without resentment. Today, therefore, we will find out what are the five signs that just do not forgive. A good way to understand who, among the people you know, is best never to be too upset, unless you are ready to lose their friendship forever. Let’s begin?

The signs of the zodiac who cannot forgive

Gemini – Those who forgive in fits and starts
Understanding what people born under the sign of Gemini think is quite difficult. In them it is as if more personalities cohabit and this makes it really unlikely to fully grasp their feelings and emotions. Their way of seeing things and making decisions is also determined by this way of being and sometimes pushes them to change their minds. Thus, in the face of a wrong suffered, if on the one hand they may seem inclined to forgiveness, on the other they will always be vacillating and uncertain about which position to take and maintain over time. For this reason, making them angry is never the best. Perhaps at the beginning they will be able to forgive but at the first sign of error, what happened before will irremediably return to the surface, leading them to re-evaluate everything and to respond not only to the last but to all the setbacks they think they have suffered over time.

Virgo – Those who harbor resentment indefinitely
Virgo natives are people who tend to forgive when they can. They do their best and that’s why they are committed to carrying out their decision. Unfortunately, when they think they have been wronged or feel hurt by someone, a sort of self-protection instinct triggers in them that pushes them to put on a sort of armor that over time becomes stronger and stronger until it creates a real and own wall between himself and others. Their forgiveness, therefore, will never be total but mixed with resentment which, if harbored for so many years, can easily turn into hatred. If so, there will be no words or actions that can make them change their mind. At times it may seem that they are on the verge of wavering but it will be enough for them to remember even for a moment the sense of frustration felt to start the attack again.

Libra – Those who always have their own idea of ​​things
Those born under the sign of Libra seem to be peaceful people and always ready to forgive. In reality, however, within themselves they keep a sort of partition where every wrong suffered is filed and kept in memory. Just like computers, therefore, in a completely unexpected moment, sometimes even after years, they are able to retrieve any information by digging into the smallest details in order to accuse any wrongs suffered. When that happens there is no way to resolve the matter at all. The idea that they will have made will in fact be unshakable and trying to change it is not among their options.

Scorpio – Those unable to forgive and always ready for revenge
Better never to anger those born under the sign of Scorpio. Their nature, in fact, does not allow them to forgive a wrong suffered. Over time they will relive it in their own minds in all its details, also grasping the nuances that at first escaped them. This, of course, will lead them to harbor resentment which, unlike other zodiac signs that at most end up ruining a certain relationship, will lead them to devise a revenge. If after making them angry they seem strangely calm, then, know that sooner or later their anger will fall on you and that they could even spend years but sooner or later they will take revenge. Indeed, doing it in such a way as to surprise those who consider the author of their moment of pain, will make their revenge even more pleasant.

Capricorn – Those who hold a grudge in their hearts and in silence
Capricorn natives are very difficult to deal with. Seemingly calm and calm, they have a very difficult relationship with forgiveness. Although in words they are always ready to forget and take a step forward to overcome a conflict, within themselves they never forget a wrong they have suffered. This will then lead them to reserve their frustration in a corner, only to bring it out in unexpected ways and moments. Unlike those born under the sign of Scorpio, they do not tend to meditate on revenge but can suddenly appear unfriendly or leave prejudiced if a situation arises that can remind them of the wrong they think they have suffered. Yes, because sometimes, they tend to take it out even when they are in the wrong. Unfortunately by not expressing what they think, understand where the problem is, if it really exists and if it is theirs from third parties.