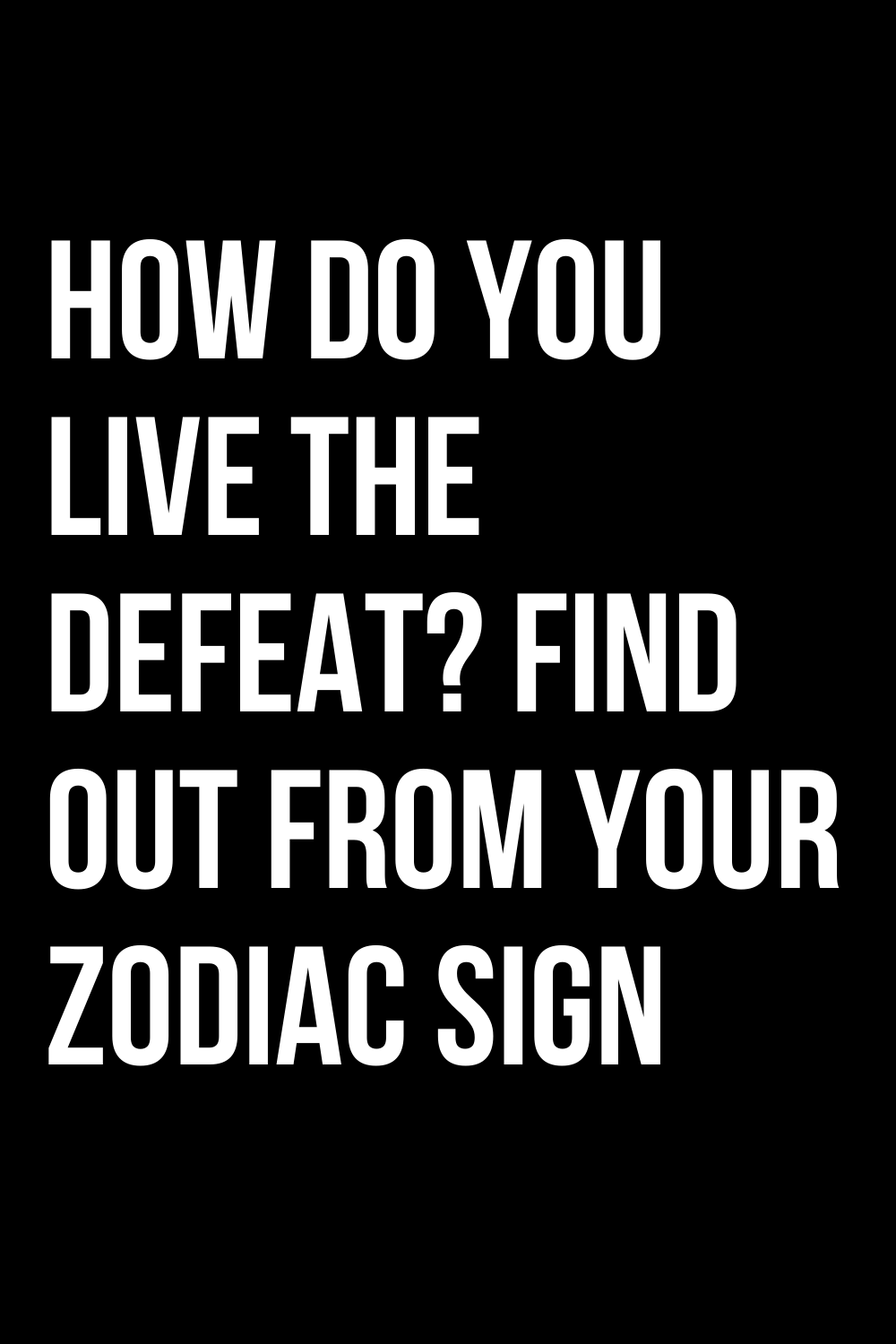 HOROSCOPE: HOW DO YOU LIVE THE DEFEAT? FIND OUT FROM YOUR ZODIAC SIGN

Find out how you experience defeat based on your zodiac sign. The opinion of the stars.

You know, life is made up of ups and downs and it happens to everyone that we have to collide with the sense of defeat. This can result from several things such as a failed project, a mistake that cannot be remedied, or a loss in a dispute. Whatever the reason, the feeling of defeat is always unpleasant and can lead to different kinds of reactions. While some people try to learn from their mistakes by getting up and trying again, others end up hitting themselves and getting depressed. Given that at least in part the way to react in the face of a defeat depends on the influence that the stars have on us today, after having seen which are the zodiac signs that love cuddling the most and which is the perfect spring destination for each Zodiac sign, we will discover how each sign lives and reacts to defeats.

Horoscope: here’s how you react to defeats based on your zodiac sign

Aries – With Anger and Motivation
Those born under the sign of Aries loathe the very idea of ​​losing and when that happens they take it so hard that they get back on their feet in search of a rematch. Competitive as few are driven by the need to prove to everyone that they are always the best and this leads them to get up almost always, driven by their desire for revenge. If the defeat comes in areas for which they were not prepared, however, the risk is to experience a disappointment so strong that it seems stuck for some time. Fortunately, there is combative and the lightness with which they usually take life, in the long run, lead them to come back to themselves to start again from where they stopped, accepting what happened and reorganizing themselves to return to competition stronger than before.

Taurus – With rapid recovery
The natives of Taurus fight to win and when faced with an obstacle they study every possible strategy to triumph and reach the goal. If their plans are in some way upset, then, the sense of frustration is so much but never strong enough to overcome the willpower that pushes them to give more and more and to do their utmost to make up for it. They behave this way both in highly competitive environments and in whatever life situation they come to find themselves in. For this reason, it can be said of them that, however it goes, they are quick to recover and always able to review the strategies implemented to improve them to obtain better results.

Gemini – Variably based on circumstances
Geminis are among the hardest to deal with when it comes to losing. If in positive moments they tend to take things with serenity, surrendering to the evidence and making the best of a bad situation, in others even the hint of defeat is enough to freak out or become depressed. If you bet on it or are disappointed in yourself, they can get to the point of giving up everything and sinking into a kind of sadness that is difficult to chase away. An attitude that often makes them even more humoral and unwilling to grasp their weaknesses, preventing them from improving. Luckily, most of the time, even if only after some time, they manage to review things from a different perspective, accepting the thought of defeat to finally get back into the game.

Cancer – With Surrender
The natives of Cancer love the easy things, which is why if they feel that something is difficult they don’t even make an effort to change it. When they decide to get involved, therefore, they do it convinced that they can get the better of everything and come out as winners. If this does not happen the disappointment is so great that it devours them, making them angry first and immediately afterward discouraging. Even after the first emotions have been overcome, the desire to try again finds it hard to mount inside them and they prefer to turn their attention elsewhere or keep away from any challenge for some time. For them, after all, life has to be simple and they just don’t accept the thought that things can be different.

Leo – With combativeness
Those born under the sign of Leo love challenges and constantly aim to improve. Concentrated like few others in having the attention of others, they always aim to get what they want and always be the best. If they decide to face something they do it with knowledge, studying every detail to be more than prepared. In case of defeat, therefore, their first reaction is one of surprise and even if they often try to make the best of a bad situation, anger invades them like a raging river, leading them to think about all the possible reasons for failure. It is a process that does not last long because once the moment has passed and they understand where things can change, they are ready to start again, more combative and prepared than ever.

Virgo – With negativity
Virgo natives are not among the most positive signs of the zodiac. For this reason, they don’t have a good relationship with what comes to disappoint them or change their plans. If they aim to finish first in something, to reach a promotion, or even simply to win a match of any game or sport, they are never ready to lose and when they feel defeat coming they are always caught unprepared, getting angry and inexorably changing mood. For a plan gone wrong, they can keep their heads for days, pouring frustration on everything around them and thinking negatively about practically everything. Fortunately, once the discouragement has passed, they tend to return to their modality, while avoiding facing the same experience again, thus limiting themselves to avoiding new comparisons.

Libra – With sadness but rolling up their sleeves
Those born under the sign of Libra are people who are very staid and always on the piece. When they think they have to achieve something, they don’t hide their hopes, working as best they can to achieve the goal. If this does not happen their reaction is never positive but neither extreme from a negative point of view. In front of the others, they will limit themselves to collect the defeat but by themselves, they will relive what happened several times to understand where they went wrong and how to remedy the damage. When they finally feel they have figured out how to change things, they are ready to get back on track, more combative than ever, and aware that the lost game has still brought them something that can enrich them.

Scorpio – With Pain and Grit
The natives of Scorpio, a bit like the phoenix, are people who can rise from their ashes. To go back to fighting for what they want, they must therefore experience the pain of defeat for good, living it to the full to cancel any negative energy about it. After the moment of depression, the determination leads them to feel, if possible, more combative than ever and therefore very ready to face even greater challenges, certain of having won it because strengthened by the defeat they have just experienced. They are people who know how to dose negativity and positive thinking well and who when they want something they put all the passion they have until they finally manage to reach the goal.

Sagittarius – With nervousness
Those born under the sign of Sagittarius have a hard time accepting defeat and when they come face to face with a disappointment of this type, they become negative by finding defects in everyone but themselves. This attitude prevents him from growing and improving in his way of acting, making it difficult to obtain different results. Fortunately, they often have people by their side who can make them come to their senses and offer them other points of view, which are essential for dealing with things differently and with greater positivity. Once they are heartened, they are therefore ready to try again even if they are still not fully aware of the weaknesses and those that they might consider resources.

Capricorn – With seriousness
Those born under the sign of Capricorn are combative people and always dedicated to what they do. Both at work and in any situation that concerns them they are committed to always giving the best of themselves. If they find themselves losing, then, they take it with bitterness but also with a certain philosophy, and, more determined than ever, they decide to change strategy to reach the goal through new paths. Their way of doing it is certainly suitable for obtaining different results but only if along the way they manage to take time for themselves. Fatigue, in fact, often tends to play tricks on them, making them lose their lucidity.

Aquarius – With feigned indifference
The natives of Aquarius do not like to lose but even more, they hate to let people know that they have been disappointed by something. When they find themselves face to face with defeat, they, therefore, prefer to ignore it, declaring that they have no interest in that thing and preferring to change direction. Inside, however, they feel the disappointment acutely and this leads them to isolate themselves and become grumpy with anyone who tries to talk to them about what happened. In other words, they need their time and personal space in which to metabolize what happened.

Pisces – With resilience
Pisces are people who have a strength inside that is often not noticed but which tends to be one of their greatest strengths. When they suffer a defeat, they initially feel flooded by a great pain that they slowly try to explore, living it to the depths and then finally leaving it behind. It is an internal process that they live in complete solitude and which very often others do not even notice. Once passed, however, they find themselves a little stronger and aware of the points to be strengthened to go back to try to get certainly better results.