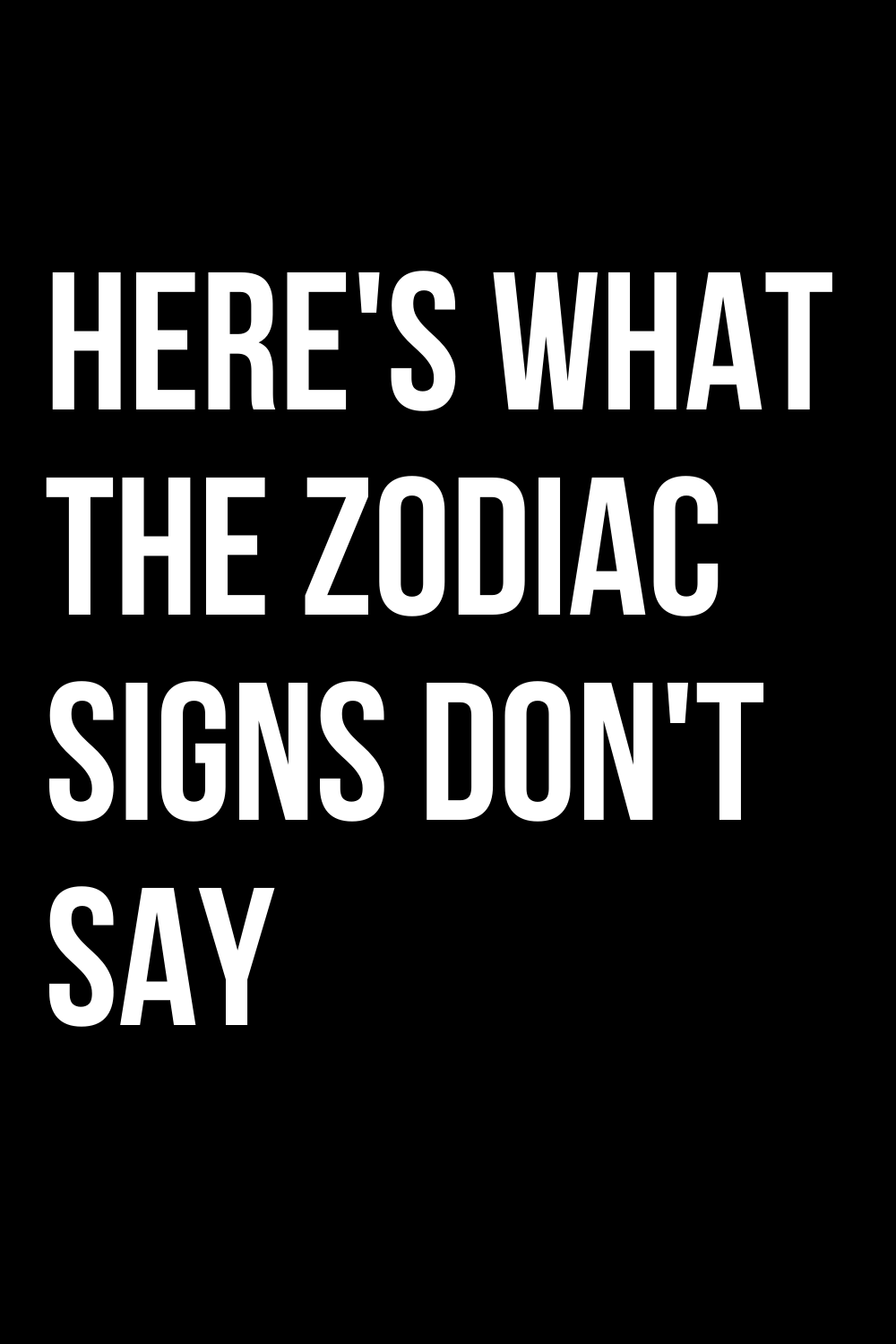 Here’s what every zodiac sign would never say. The opinion of the stars.

Each person has his inner world, made up of secrets and unspoken words that in many cases will never be revealed to anyone. Sometimes these are simple omissions, others are real states of mind that it is difficult to externalize because of the character or fears that are often unmotivated but well-rooted in people. Since fears and ways of being and feeling are often governed by the influence of the stars, today after seeing how each zodiac sign loves and what is the right way to flirt with the signs of the zodiac, we will find out what it is every zodiac sign avoids saying and that he keeps for himself, sometimes even at the cost of getting sick. As always, since it is something related to the way of feeling, the advice is to also check the profile of the ascendant of the person concerned, to have a more complete picture.

Aries – I am insecure
The natives of Aries are people who always like to show themselves one step ahead of others. Active and combative, they love to finish first in life, which often leads them to take on competitive ways even when there would be no need. This form of aggression, more often than not, comes into play when they feel threatened by something or someone. What they can’t admit even under torture is the fact that they feel insecure, which happens to them too. Too bad that the way they see things is an aspect to be ashamed of and on which they will very hardly be willing to give in.

Taurus – I need reassurance
Those born under the sign of Taurus are people who appear very self-confident and who for this reason tend to make many friends who, more often than not, feel attracted to their calm and the ways they do. they have. In reality, even if they love to give advice and show themselves certain of their means, the natives of the sign have a great need for reassurance. They love to do things right but this is not enough and in the absence of feedback they tend to feel like they are missing something. Unfortunately, to maintain the image they know they have, they struggle to admit that they need reassurance. Some manage to open up with their closest affections but most avoid addressing such a subject, keeping to themselves the doubt of not pleasing them as they would like.

Gemini – I don’t want to be alone
Gemini is one of the most difficult zodiac signs to understand. Often fluctuating, in reality, they hide a deep fear of emptiness and loneliness. If they feel at ease among others the relationship they have with themselves is completely different and is often guided by their way of being. Aware of getting tired of everything easily, they experience this with certain anxiety that translates into the fear of being alone by their own choice or by the will of others. Nonetheless, somehow prisoners of the image that others have of them, struggle to admit this reality, so much so that they always appear cheerful and independent, as if they did not need anyone to live their own life.

Cancer – I’m not enough
Natives of Cancer are deeply insecure people who always try to show themselves up to the occasion but who feel quite unsure of their means. This leads them to be particularly clingy with the people they care about, reaching extreme forms of jealousy that often backfire, leading them to the very result they feared so much, that of being pushed aside. In competition with anyone who stands between them and the people around them, they take it easy and are so scared that they cannot think clearly, sulk or attack the very people who more than anyone else would like to be at their side. Hoping to hear him tell the truth, however, is a utopia because they struggle to admit how they are even to themselves.

Leo – I’m afraid of going out
The natives of Leo live their whole life attracted to the light under which they hope to be able to stay as long as possible. In reality, this constant desire to emerge and to be the center of attention is given by a great fear of losing the limelight without which they would feel lost. Little in tune with what they have inside, they are so projected outward that they do not understand how to move without taking care of appearing. For this reason, even if they will never admit it out loud, they live much of their life trying to get noticed and remembered.

Virgo – I don’t want things to change
Those born under the sign of Virgo are usually closed out and focused mostly on their things. Sedentary as few do not like things to change so much that they would be able to repeat the same routine over and over again for several years. Although reluctant to admit it to others, he likes things to remain as they are because they strongly fear everything new and unexpected, and this even though sometimes, once the fear is overcome, they realize that they have tried something even better. No matter how many positive experiences they have, it is unacceptable for them to change. For this reason, they often judge quite harshly those who, unlike them, show themselves free to experiment and always have new experiences.

Libra – I want the best for me
Although the natives of Libra show themselves to the world as kind people, serene and interested only in what is beautiful, the truth is that from the life they always hope to reap the best. Of course, their concept of the best is often different from that of others but this does not change that whatever they do is always with a look at the future and the possible consequences that they always hope will be positive. Lovers of life and all that it can give, they love to surround themselves with people who can appreciate them for who they are, and when this does not happen they prefer to end relationships. For them, the world around them is a sort of mirror that, as such, must reflect the image they have of themselves and which is almost always perfect.

Scorpio – I need you
Here is a sentence that is almost impossible to hear those born under the sign of Scorpio. Proud as few, the natives of the sign love to show themselves as strong and impassive people, always ready to go to war and to play everything. What they try to hide from others is a much deeper soul than what they usually show and that can be hurt with little. Likewise, even in relationships with others, they are much more sentimental than you think. The rare times they manage to open up, they can show an incredible world that they hold all life within. More generally, they prefer not to show whether or how much they suffer, keeping their wounds for themselves and continuing straight even if the only thing they would like is to have loved ones by their side.

Sagittarius – Why aren’t you like me?
The natives of Sagittarius constantly feel misunderstood without understanding that this feeling is often given by their way of managing things, often incomprehensible to the rest of the world. So, while keeping it inside like a scream, what they would like to ask others is to be like them, to understand them, and to put themselves in their shoes. Something that they are the first to fail to do to the point of believing that the ways of others are wrong, setting themselves up as judges first. In short, often confused between the desire for freedom and the need for attention for which it is necessary to create solid relationships, they end up feeling alone even amid so many people. A result that they hate and which they consider attributable to the lack of understanding on the part of others.

Capricorn – I can’t do it, help me
Those born under the sign of Capricorn are hardworking people who need to fill their days as much as possible to feel good. For this reason, it is practically impossible for them to admit that they are overburdened with commitments or to refuse others saying that they cannot make it. This is for them an admission of guilt. A problem that often pushes them to undertake commitments that can exhaust them and make them nervous. For this reason, their social relationships are not always at their best, especially with people with whom they have the most confidence and on whom, when they are saturated, they end up unloading their frustrations. The only way to help them? Lighten them some weight without expecting them to do it.

Aquarius – I’m sorry
There are very few things an Aquarius wouldn’t say. These are people who do not have the slightest problem with what others think, to the point of living their lives as they see fit and without caring about social issues. If there’s one thing they struggle with, though, it’s apologizing. The reason is first of all because they rarely feel they have something to apologize for and soon after that they hate having to apologize. If at times they do so it is only to get a respite from an offended person. Often, however, it is a proforma that hides empty words.

Pisces – Sorry but I’m sick
Pisces are empathic people and always ready to give their help to those who suffer or seem sad about something. This sometimes ends up tiring them, causing them to have mood swings that they try to keep to themselves in every way. The natives of the sign-in fact, do not like to let others know that they are suffering for something and the reason is that they do not feel comfortable in putting their negative emotions on the people they would like to console. It is therefore very difficult to hear them say that they are bad about something and the rare times they let something leak out, they always tend to downplay the problem so as not to worry others. Inside, though, even if you don’t see it, they end up carrying more pain than they can handle.