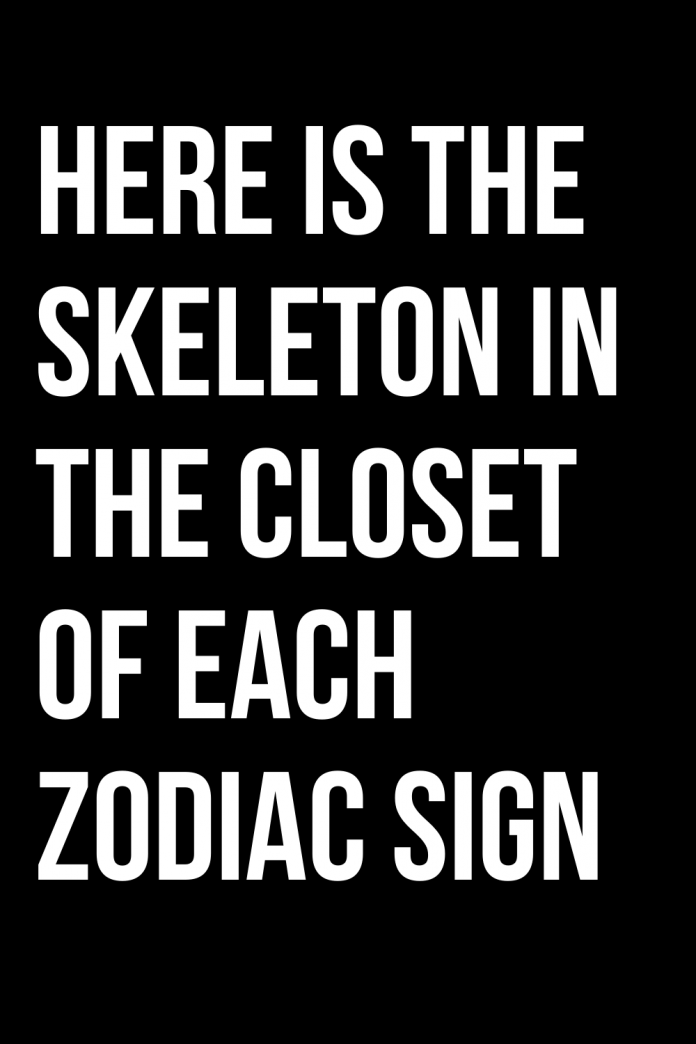 Find out what the skeleton is in the closet of each zodiac sign. Whether small or large, everyone has one.

When you try to get to know a person, immediately after trying to understand who he is and what strengths and weaknesses he has, the questions that concern him begin to become more and more personal up to what he does not say and what could be the secrets it hides.
Each person has at least one skeleton in the closet, something that he tries not to show to others and that often does not even confide in his best friend. Since what we often try to hide can be a way of being or doing that depends on the influence of the stars, today, after having seen how complicated we are and what is the most suitable hot drink for each zodiac sign, we will try to discover what is the skeleton that hides in the closet of each zodiac sign. To get a clearer idea, it is advisable to also check the profile of the ascendant of each sign.

Aries – The Pleasure of Thrill
The natives of Aries love to always feel on a tightrope. This allows him to ignite for everything and to live every moment as if it were the last. And since feeling the adrenaline rushing in their blood is one of the sensations they love most, it is very likely that behind a seemingly peaceful life some secrets allow them to feel alive even while carrying out boring activities. It can be racing, gambling, or having a lover with whom you can feel the thrill of being discovered every time.

Taurus – The betrayal
Well yes, although they are people who love stable relationships and who always seek serenity in life, those born under the sign of Taurus are often tending to look around and take crushes for other people. When this happens they try to keep things on the platonic, trying to make the sensations of the possibility of a story suffice without carrying it on. Sometimes, however, their way of acting or the response they receive from the other side may lead them to cheat. If this happens, they usually don’t feel guilty and try to get it over with before the person they’re with realizes it.

Gemini – Lies
As you know, Gemini is people who need a life full of stimuli. When these are lacking they tend to create them themselves, sometimes even pretending about the reality of things, trying to romanticize what happens to them. These are usually small lies that unfortunately are repeated frequently to the point of making him forget even having told them. For this reason, it is very likely that by chatting with them the accounts will not add up over and over again. When that happens, the problem is probably a lie… that they may not even remember saying.

Cancer – Secret friendships
The natives of Cancer do not usually betray, at the same time, however, they do not have great problems in omitting things. If they believe that a particular friendship may annoy a friend or the person they are with, for example, they don’t mind carrying it out without telling anyone. Indeed, just being able to do it makes them feel special in some way at the center of everyone’s attention. A feeling so pleased that it encourages them to continue down this path even though it could hurt the people around them.

Leo – Economic problems
Living in glitz and always being the center of attention has a price that those born under the sign of Leo are willing to spend even when they cannot afford it. There being more than positive about their work and about the economic issues that concern them, at times, pushes them to take the longest step, so it often happens that the natives of the sign find themselves having to face debts that out of pride. they will always and in any case avoid disclosing, trying as they can to pay them at their own expense, even at the cost of working triple, showing themselves if possible even less in the bill than they are.

Virgo – Failures
Those born under the sign of Virgo always need to show themselves up to the occasion. To do this, given their very rigid standards of judgment, they cannot even admit to themselves that they are wrong. This often leads them to failures that they struggle to manage and that over time can even become complicated and all due to their lack of ability to face and solve them. It is therefore likely that their skeleton in the closet is just a failure, perhaps distant or past but for them, it still burns like the first day, to the point that they cannot even think about it.

Libra – A Few Tweaks
Not necessarily aesthetic tweaks are inside the closet of the Libra natives. Lovers of beauty and eager like few others to improve their image those born under this sign are often at the center of great sacrifices aimed at reaching a weight they consider ideal and always maintaining an impeccable image. Too bad that even in the face of evidence they always prefer to deny having made enormous sacrifices or having made themselves lend a hand (in some cases even by the surgeon) for the sole purpose of improving themselves.

Scorpio – Objects of the past
Although they love to show themselves as people projected into the future, the natives of Scorpio have a habit of collecting objects. It does not matter whether they are personal memories or things that belonged to exes or friends with whom they have not been in contact for a long time. If they can do so, they usually keep as much as they can as if it were relics that are important to them as witnesses of past moments. While this does not imply a sentimental bond with people any longer present in their lives, they prefer to keep the secret about it, keeping both the memories and the objects that arouse them for themselves.

Sagittarius – Secrets of their way of being
Those born under the sign of Sagittarius need to constantly feel appreciated and to do so they lie about their past. Many times they prefer to tell things that are not true or show themselves different from what they are, except to contradict themselves shortly after in a total change of direction. Theirs is mostly a kind of insecurity that they try to disguise as they can but that often leads them to get confused, losing sight of what they are or want.

Capricorn – Feelings
Capricorn natives tend to hide their feelings and what they think about the world around them. To be honest, not even they know very well the reason for such an attitude which, however, they are hardly able to escape. Convinced that they never have to show their side, they strive to appear stronger than they are, hiding the strongest emotions and hiding behind words built specifically to sidetrack others from what they feel. Too bad that most of the time they end up betraying each other, nullifying most of the efforts made.

Aquarius – The omissions on their daily reality
Those born under the sign of Aquarius usually live a present of their own that they try to hide as much as possible from those around them. Privacy is one of the most important aspects of their life, to the point of being able to lie about their age, sentimental condition, and even the work they do. For them, doing it is much simpler than telling the truth and even when they are discovered they don’t break down too much, sure of their means.

Pisces – Addictions
Sensitive like few others, the natives of Pisces often still have forms of addiction that can support them in everyday life. Nothing transcendental, many times it comes to little things like coffee or some vice that relaxes them. In other cases, the more serious ones, however, leads to addictions to food, alcohol, or even drugs. The point is that aware of not always being understood as they would like, most of the time, they avoid asking for help even when it would be needed and all because they prefer to do it alone and keep to themselves what they consider strictly personal facts and therefore of little interest. for those around them.