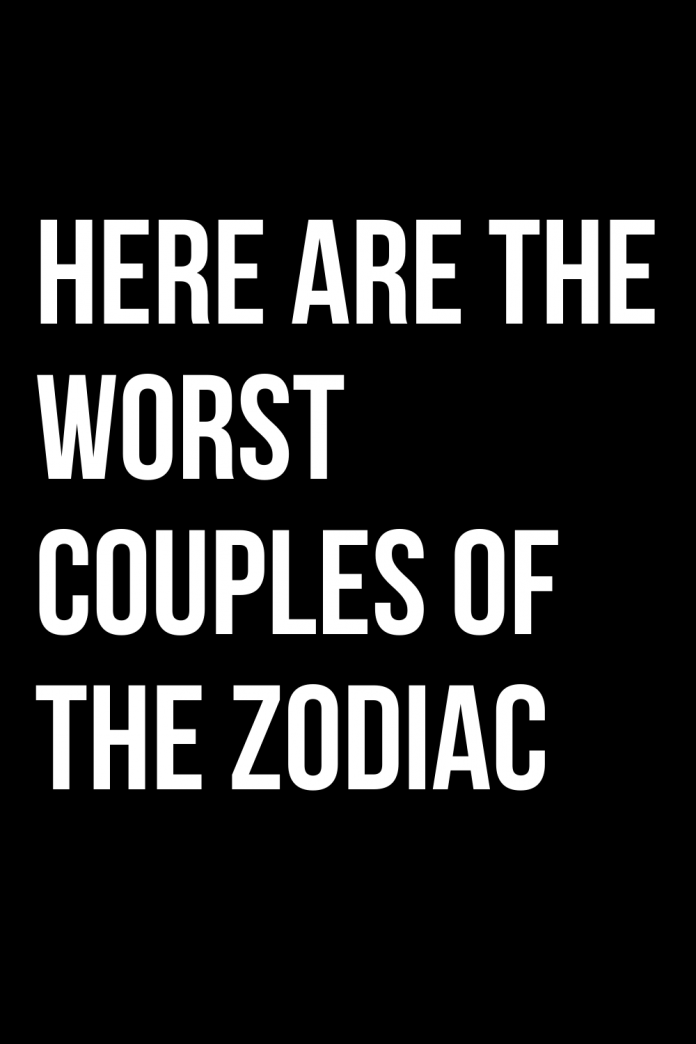 Find out which are the worst couples in the zodiac.

When you fall in love, you initially tend not to want to notice the character or moral differences that can put a relationship at risk in the long run. Among these, there are obviously also those related to the zodiac signs they belong to. Believe it or not, in fact, there are really incompatible zodiac signs that will hardly be able to get along over time. Of course, love can work wonders and if the underlying feeling is really strong it is always better to try than to remain with the doubt of what could have been. Having said that, however, it is always good to know at least what you are likely to encounter. And who knows that by playing in advance you will not be able to improve the situation. After seeing the sign of the month what are the signs of the zodiac over the top , today we will discover the couples who, together, risk setting themselves on fire rather than making sparks.

Aries with Cancer
Aries is a vital sign, always ready for action and sentimentally a little superficial. These characteristics make it not very compatible with signs such as Taurus, Pisces and Cancer.
Among these, the one with whom he risks sparking constant quarrels is precisely the Cancer who, sensitive, introverted and in need of constant attention, would end up going against the Aries lifestyle and his need to always be at the center of the action. . Despite a possible initial attraction due precisely to the differences, the clashes risk being such as to make us forget any possible feeling.

Taurus with Aquarius
To be honest, the signs with which the Taurus is not destined to get along are two in particular, namely Scorpio and Aquarius. While with the former physical and mental attraction can act as a glue, with the latter things risk getting worse day by day, leading to the end of love and the beginning of an internal war capable of draining both of all energy. . If the Taurus needs fixed points and certainties, the Aquarius needs freedom and abstraction. And on these two aspects these two signs will never be able to get along unless they put their way of being aside for the love of the other, which in the long run would still risk not working.

Gemini with Sagittarius
Although similar in some respects, these two signs seem to be very little destined to get along. Gemini because of their way of always changing point of view and Sagittarius because of the need for freedom and the inability to make long-term plans. A combination that, if at first it can give both joy and fun, over time would bring to light only problems to be solved and the awareness of not being able to do it together. An important aspect to take into consideration before starting a relationship.

Cancer with Capricorn
If, as we have already seen, Cancer does not get along with Aries, another sign with which it does not agree is undoubtedly the Capricorn with which it forms perhaps the worst couple. If it is indeed important for Cancer to express their feelings and understand those of the other person, Capricorn struggles considerably in expressing themselves, sometimes appearing distant, which for Cancer is a serious flaw that in the long run risks not being well tolerated. , leading to quarrels and possible breakups.

Leo with Virgo
Leo is a vital sign and always ready to fight to achieve his goals and this places him in total contrast with the Virgo, usually critical and never ready to bet everything on himself. These are two signs that in some ways attract each other but at the same time repel each other, leading to unpleasant situations for both. Among the biggest reasons for conflict are the way of managing finances and free moments, experienced by both signs in decidedly opposite ways.

Virgo with Leo
Virgo, as already mentioned, does not get along well with Leo. There are other signs she may be at odds with such as Cancer and Scorpio. Of all, however, the most distant is still the Lion.

Libra with Capricorn
Two other signs that are not very compatible with each other are Libra and Capricorn. If the former loves to make everything more beautiful and liveable, trying to fully enjoy the beauty inherent in things, the latter tends to throw himself headlong into work, wasting all energy in carrying out his own projects and without paying any attention to what has around or how to experience it. Two decidedly different worlds that are substantially difficult to put together and that as a couple would always end up clashing on everything, from managing the relationship to the simple choice of what to do together from time to time. Any small problem seen from their point of view would end up being exhausting, tiring both of them and thus leading to new discussions.

Scorpio with Virgo
Scorpio and Virgo are two very different signs and they struggle to get along. If Scorpio tends to be rather pragmatic, Virgo always tends instead to a practical sense that more often than not can become a moment of confrontation. The same happens for the constant criticisms that Virgo makes towards everyone and that many times tend to annoy Scorpio. The desire of the first to fight against the pessimism of the second represents the classic straw that breaks the camel’s back and which in the case of Scorpio and Virgo can indicate intense moments of tension. These are two signs that even in relationships of simple acquaintance tend to be a bit like a dog and cat and that although they agree on some aspects and feel good when in tune, they can always ruin everything in a single moment.

Sagittarius with Scorpio
Sagittarius usually feels attracted to the independence of Scorpio, at the same time, however, they end up envying their completely natural way of living their life. Lover of uncontrolled freedom, he often finds himself clashing with that of the Scorpio which is instead managed by very specific rules. A situation that is also repeated in other areas of life such as family management, work, the way of living free time and even vacation days. Although compatible in words, they are two different signs and with great difficulty in finding meeting points that are actually such.

Capricorn with Aries
In addition to the incompatibility with Libra and Cancer, Capricorn also has that with Aries. The latter, in fact, is too impetuous in making even important decisions and proves too fatalistic on topics that are particularly dear to Capricorn, such as, for example, work. Their characters therefore make them always on the alert and ready to tease about every little thing. An aspect that, in small doses, can also be stimulating for the relationship but that in the long run only leads to cracking the relationship.

Aquarius with Leo
Although there are many possibilities of attraction between these two signs, the reasons for clash are many more and depend on various factors such as, for example, differences of opinion and the need that both, albeit in different ways, have to be the center of attention. Quiet and in need of serenity, Aquarius does not love the worldly style of Leo and at the same time envies their ability to always be the center of attention. At the same time, even the Leo seems to envy the way in which the Aquarius manages to get noticed apparently without lifting a finger. The competition between these two signs is essentially too fierce for anything good to come of it.

Pisces with Sagittarius
Pisces are too romantic and tied to a personal vision of the relationship that will never match that of a Sagittarius. A story between them is therefore decidedly difficult to establish unless one of the two is decidedly outside the box and therefore able to work together with the other without suffering any pressure. One’s desire to always be together is badly combined with the other’s need for freedom and different ways of doing and thinking are also combined with everything that in the long run would cause more and more frequent discussions and can ruin any harmony in the couple. established.