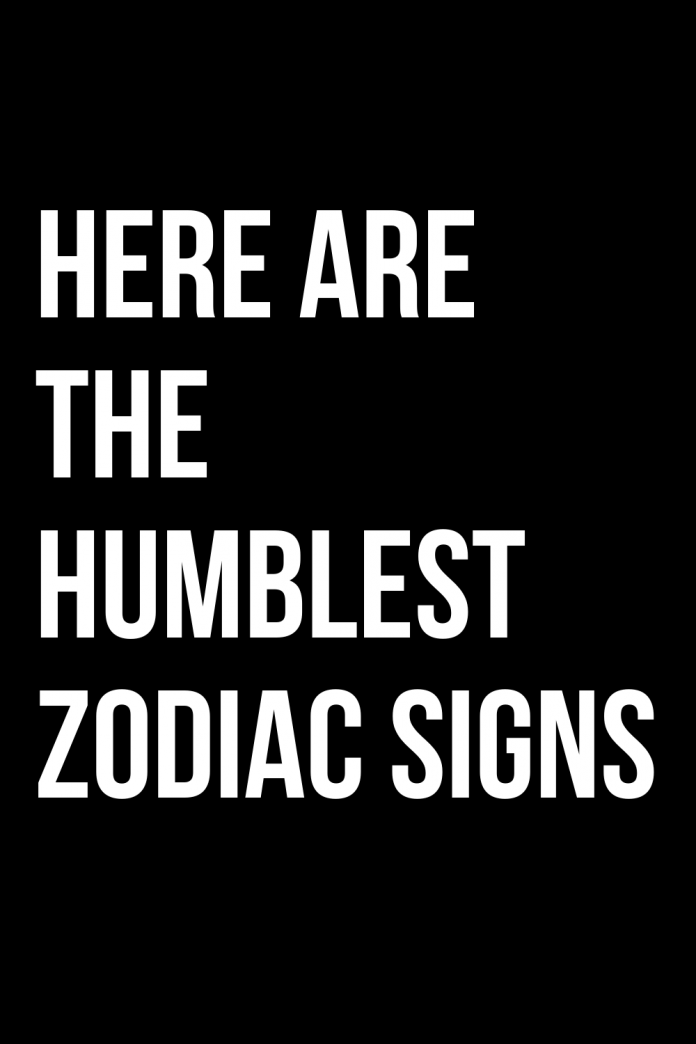 Find out which are the humblest zodiac signs according to the stars.

Humility is a quality that fewer and fewer people show they have. Nonetheless, there are many who boast of being humble, perhaps while praising each other on social networks or while trying to prove how good they are at something. It is now an increasingly abstract concept which often tends to escape from the canons that would have been given to it until some time ago. Given, however, that even humility is in some way influenced by the stars, today after having seen which are the most melancholy signs of the zodiac and which are the most correct , we will try to discover the humblest signs of the zodiac and those who are not at all. Since this is a way of being, the advice is to also check the profile of the ascendant of the sign that you want to deepen, in order to have a clearer picture of the situation.

Here is if and how humble the various zodiac signs are

Aries – Almost Nothing Humble
Those born under the sign of Aries are not humble people. This depends at least in part on their being in constant competition with everyone, which leads them to want to show their attributes and the qualities they possess in order to “alarm” their alleged rivals. It is a completely different way of doing from that of those who are humble and who come into conflict with this quality. Moreover, they are often people who tend to believe a lot in themselves, which exacerbates what has been said, making them in fact among the least humble signs of the zodiac.

Taurus – More humble in words than in facts
The natives of Taurus are quiet people who aspire to a peaceful life without particular fights. For this reason, if they talk about themselves, they tend to describe themselves in a summary way, without showing off particularly. From this point of view, therefore, it can be said of them that they are very humble people. When it comes to what they think of themselves, however, things change. Taurus, in fact, have a high opinion of themselves, which they tend to share only if they feel challenged or if it becomes necessary. In case of victory, however, they will rarely say something that makes them appear not very humble, even though they triumph internally to the point of even feeling superior.

Gemini – Humble under the circumstances
Gemini does not have very clear ideas about themselves. For this reason they do not easily fall into humble people or those who are not at all. Basically they tend to feel confident in some respects while they end up being humble in others and this even when it is clear that they excel at something. What is certain is that their attitude will always be sincere. If they appear humble it will be because they really don’t feel they have to show off.

Cancer – Not very humble
Those born under the sign of Cancer aim to appear humble, but seeking confirmation in others of their qualities. This happens because, in reality, they are not at all what they want to show themselves but they love to receive compliments from those around them. Their way of being can end up exasperating those who, knowing them, do not want to indulge them, above all because when they do not receive the awards they would like, they end up getting irritated and offended by putting a muzzle and implementing a rather hostile attitude.

Leo – Anything But Humble
For Leo natives, being humble is almost an offense. For them, showing off is of fundamental importance, as is knowing that they are always first in everyone. Seeking humility in their ways is therefore unlikely and if that happens it is because they are probably just trying to appear different than they are. After all, to stay on top you need to believe strongly in yourself and show others what you are worth. And those born under the sign of Leo are incredibly good at this.

Virgo – Not at all humble
Even those born under the sign of Virgo are not among the humblest signs of the zodiac. The confidence they have in themselves and the sense of superiority that often takes them makes them feel like they have to show off and make known to everyone what they excel at. An attitude that, combined with the habit they have of judging others, can create friction with those around them. A problem that they tend to never take seriously, thinking that it is others who are exaggerated and in the wrong.

Libra – Humble Enough
The natives of Libra show themselves quite humble, even when they know they have particular merits or qualities. This is because they do not need the approval of others to know they are worth. What matters to them is to feel good and in harmony with their surroundings. Furthermore, loving the idea of ​​always appearing kind to others, they will hardly have the ambition to show themselves off, thus appearing even more humble than they really are.

Scorpio – More humble than others
Those born under the sign of Scorpio know each other well enough to know if they excel at anything. Being people who basically do not like to lie, they tend to live their successes in the open. In doing so, however, there is almost never ostentation but rather the simple desire to share. For this reason, although they know and appreciate themselves where they believe they can do it, they are never arrogant or pretentious. It can therefore be said that they are humble, especially when compared to other signs. But theirs is a kind of conscious humility, which from a certain point of view is even more positive.

Sagittarius – Not humble
Sagittarius natives are not people who like to get lost in attitudes that don’t reflect them. For this reason, when they appreciate something about themselves they can’t help but show it off, also expecting a certain amount of compliments. If they do not arrive, they immediately think that they are victims of envy or wrong attitudes towards them. A way of doing things that often risks compromising their friendships, even those of long standing.

Capricorn – Not interested in appearing humble
It is not that those born under the sign of Capricorn are people full of themselves, they simply do not aim to appear humble, showing their strengths without asking themselves about it. For them, in fact, having merits is something that must be highlighted, which they also do with those of others and which, obviously, they do all the more when it comes to them. A way of doing that those who know them well almost always end up accepting as part of their way of being.

Aquarius – Humble
The natives of Aquarius, in a hypothetical ranking of the humblest signs, are in the middle. In fact, they are not interested in bragging about their own merits, yet they have no problem even bragging about it. Let’s say that a lot depends on the moment they live and on the circumstances that can lead them not to share successes and qualities or to do the opposite. As always, these are unpredictable people, especially when it comes to interpersonal relationships in which they do not excel but who, on the other hand, live in the most natural way possible.

Pisces – Very humble
Those born under the sign of Pisces are among the humblest signs of the zodiac. Some of this attitude depends on the empathy they have with others and which always leads them to try not to make anyone feel uncomfortable and partly depends on the shyness that so often distinguishes them. The only time they may appear unhumous is only if provoked by others. In that case, empathy aside, they are able to openly recognize their strengths, no longer worrying about hurting those who may be at a disadvantage.