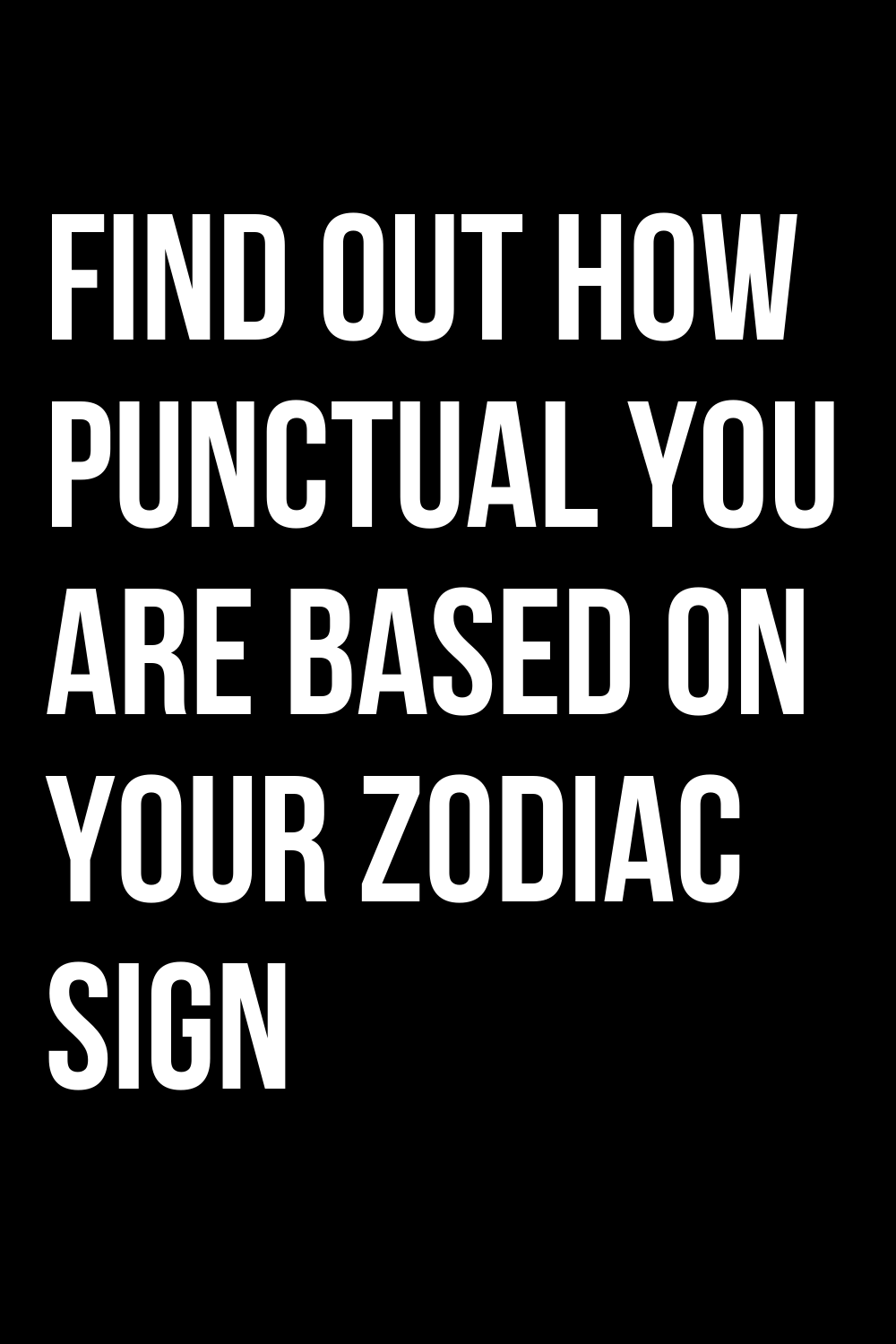 HOROSCOPE: FIND OUT HOW PUNCTUAL YOU ARE BASED ON YOUR ZODIAC SIGN

Find out how punctual you are based on your zodiac sign.

Each of us has ways of living situations that vary from person to person and that depend in part on the character and experiences lived and in part on the influence that the zodiac signs have on us. Among the ways of being, punctuality is included, for example, so much so that if on the one hand there are people who are almost obsessed with punctuality, on the other, there are others who, instead, live it with extreme relaxation, so much so that they always arrive in delay. Since punctuality affects our lives in a particular way, today after having seen how each zodiac sign manages anxiety and what are the strengths and weaknesses that each of us has at work, we will find out if the various signs of the zodiac are punctual or late.

Horoscope: how punctual are the various zodiac signs

Aries – Punctual
Those born under the sign of Aries are people who are always on the move and who love to enjoy every moment of life. For this reason, they tend to always be on time, even when they don’t try too hard to be. Simply, they do everything on time and without delaying too much and this means that they manage to arrive almost always on time to the various appointments, resulting in the most punctual signs of the zodiac.

Taurus – Depending on the situation Taurus
natives know how to move to be on time but they don’t always do it. If they commit that they particularly care about, they will go out of their way to be on time. Otherwise, they will not struggle while trying not to delay too long. They generally have delays of a few minutes but even if they were to be bigger they don’t usually get alarmed, taking things as they come.

Gemini: Every other day
Those born under the sign of Gemini live for the day and tend to be influenced a lot by the state of mind in which they find themselves. So, if they are in a good mood they can be on time even arriving early. Otherwise, they can lead to worrying delays. They certainly always tend towards extremes in one or the other direction rather than mathematical punctuality.

Cancer – Not Punctual
Cancer natives are not among the most punctual people in the world and when they find themselves on an appointment they already know that they will most likely end up being a few minutes late. The problem is that often, even without realizing it, they tend to linger on so many things that they end up being late. A problem that does not seem to concern them that much since they never break down that much.

Leo – Quite punctual
Those born under the sign of Leo are almost always punctual and this is because they always have something to do and are particularly good at organizing their times. When they have important commitments they can even arrive early while in the case of normal situations they are more usual to arrive on time, so as not to have to wait. The idea of ​​wasting precious time is something that they do not tolerate, and that makes them nervous to the point that they can choose to arrive purposely late when they know they are dealing with real latecomers.

Virgo – Punctual
Needless to say, Libra natives are more accurate than a Swiss watch. For them, doing things right is practically an obligation and this also includes arriving on time for an appointment. Generally, they do not like to arrive earlier or later but simply on time and it is certain that in case of delay others will point out this without too many problems, dwelling on the importance of always showing up early and on how much this is an aspect they care about.

Libra – On average punctual
Those born under the sign of Libra are very keen on punctuality, not only to their own but also to that of others. Having to wait irritates them and makes them feel little considered and for the same reason, they try to always be punctual, considering it as a form of respect. Very attached to the label, they will also take care not to arrive too early, especially if invited to someone’s home, in which case they will take care to check the time to show up exactly on the hour.

Scorpio – Possibly punctual
The natives of Scorpio always want to give a good image of themselves and when they have to show up for an appointment they undertake to do it in the best way, showing up on time and if possible even in advance. Being late is not something they like and when it happens they tend to get nervous. Once the ice is broken, however, they can even get used to it, ending up always delaying. Not by much, but those five or ten minutes that are enough to define a small lack for which they will apologize every time but without feeling who knows what remorse.

Sagittarius – Punctual but in periods
Those born under the sign of Sagittarius love to feel free and for this reason, they do not accept the idea of ​​conforming to a specific way of being or acting. This means that if they succeed, and this does not involve too much effort, they will always show up on time but if the period requires more calm they will not have problems arriving late, all without feeling in the least guilty. At the same time, however, they tend to demand different ways of acting from the others which always require precision, with long faces that can be put on and maintained even for different times.

Capricorn – Hardly ever punctual
Although they are as accurate as few others when it comes to working, natives of Capricorn are not among the most positive people. This depends on their being always busy with a thousand commitments that at times can make them miss a few strokes, leading them to linger or not consider the time to reach one place rather than another. The strange thing is that they live it with extreme serenity, without worrying about it too much and always finding excuses to justify their shortcomings, both small and large.

Aquarius – Punctual if they need it
Those born under the sign of Aquarius don’t have any problems about being punctual or not. Knowing how to organize they are more often than not on time, when they can’t, however, they just shrug their shoulders and communicate the new arrival time. At the same time, they are quite calm about the lack of precision of others, worrying about their things, and always find an alternative plan that will allow them to live their day in the best possible way.

Pisces – Punctual as much as they can
The natives of Pisces are always with their heads in the clouds and this, at times, can lead to some oversight such as being late. As this is something they can’t stand, they will always go out of their way to avoid it, apologizing for the times they can’t. Generally, they manage to be quite punctual, except when unexpected events get in their way, creating annoyances. Even when they arrive late, however, they always try to do so by advising and allowing others to organize themselves in time, and this is because they always have great respect for those around them.