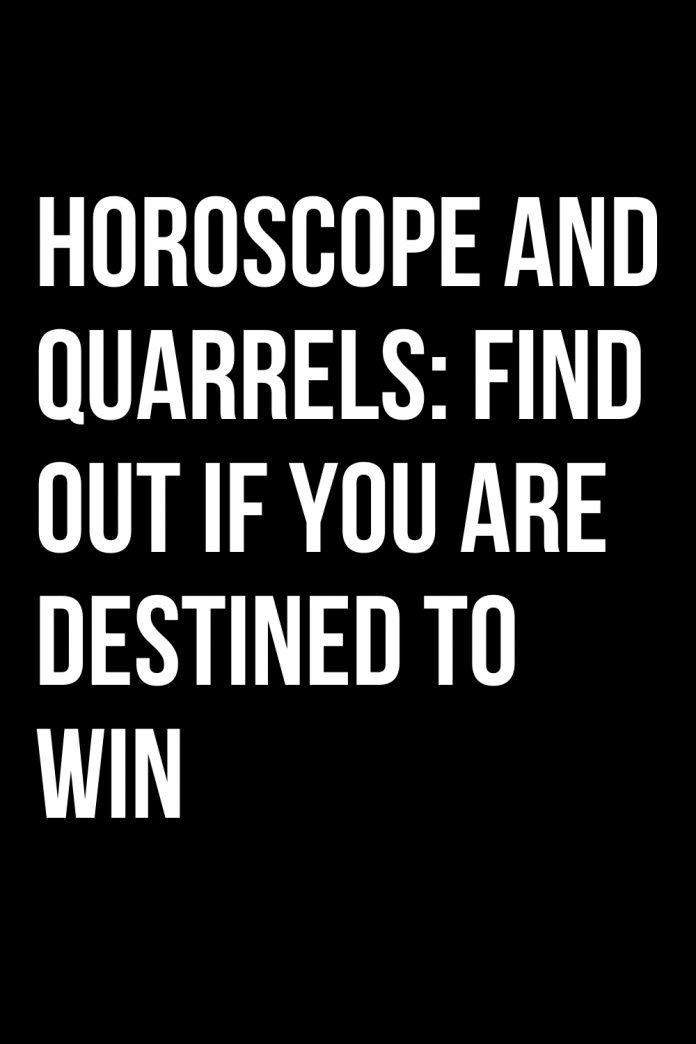 Horoscope: find out if your zodiac sign is among those who manage to win in discussions and disputes.

Arguing is bad and this is a fact. When the crime happens, however, hardly anyone cares about this aspect which suddenly seems to become secondary, giving way to a sudden desire to get the better of the other. Being able to explain your point of view and be right is one of the things that leads people to discuss more and more often and which, you just can’t do without. In this sort of struggle, there are people who seem destined to always win. Of course, this may depend on the dialectic, the ability to express things and the more or less strong charisma. The reality, however, wants that even the stars have an influence on the ability to emerge victorious or not from a heated discussion. Today, therefore, after seeing how a couple relationship can evolve after marriage and what is the way to smile of each sign , we will find out which zodiac signs are destined to win more often in an argument . Ready to find out if you are among them?

Aries – The Overall Winner
Let’s face it, who better than you can be the winner in an argument? After all, it is still a form of competition, which is practically your daily bread. Expressing your reasons and proving that you are right is so natural to you that you hardly realize the energy you put into every fight. An explosive energy that always ends up tiring the other party who, by dint of feeling attacked on every front, in the end, a little from exhaustion and a little from lack of new arguments, almost always ends up giving in, leaving you the podium of reason. In short, it is better never to have anything to discuss with you, because the moment would not be pleasant at all.

Taurus – The one who never gives up
For you an argument always has a particular importance and, for this reason, you put your heart and soul into it, working hard to exhaustion just to prove that you are right. Dealing with you is like being in a courtroom. In fact, albeit with calm ways, you tend to face things with extreme seriousness, focusing your attention on the points you consider winning. Yours is a real strategy that you put in place with the sole intent of winning and that as such makes you really a fearsome counterpart. Also being stubborn is part of your character and what’s better than being able to turn what is usually called a flaw into a winning ace?

Gemini – A tough nut to crack who even knows when to stop
If you think you are right, you are ready to challenge everything and everyone in order to assert your thoughts, even managing to embarrass your interlocutor. When you are not completely convinced or do not consider it extremely important, however, your interest tends to diminish and so your desire to win over the other. In short, your chance of succeeding depends solely on the desire you have to fight to the end and on how much you think you are right. Without a right motivation, in fact, you prefer to stop and let others think what they want. After all, it’s not something that interests you that much, is it?

Cancer – The one who pits or screams, thus losing the reason
. Quarrels are not the best for you. Confronting others puts you in trouble and makes you so nervous that your every word is likely to be wrong. Also, when you feel outraged or outraged, you end up poking your nose and stamping your feet, throwing tantrums like a real child. An aspect that perhaps once could also help you win but that growing up has lost a lot of its polish, which is why it is difficult for you to get the better of an argument and when this happens, it is often because the other has chosen to give it to you. Maybe by changing your attitude you might be able to really get the better of it sometime. Until then, however, the chances are very slim.

Leo – The one who always wants the last word
For you, even the very idea of ​​being defeated in an argument is completely inadmissible. Used to excel over everything, in order to appear as the one who is always right you are ready to fight to the sound of debates in which, however, you tend to play more on the defensive than on the attack. In fact, the thing that matters to you is to make others think of you exactly what you want them to understand and never the other way around. Because of this, discussions with you can go on for a long time and even take place in stages. In fact, as long as you don’t think you’ve got the better of it, you don’t give up.

Virgo – The one who, in order to be right, puts an end to discussions
Being wrong is something that does not belong to you, to the point of not even being able to consider the idea. When you find yourself at the center of a discussion that seems to be playing against you, your instinct is in fact to end a discussion on the alive one, keeping the last word and with it the illusion of being right. A way of doing that inevitably puts you in the wrong and that for this reason you should try to change by learning to bear the confrontation of others and the possibility that not everyone thinks like you on various issues.

Libra – The one who aims more at balance
To be honest, you don’t want to prove you’re right as much as make sure others understand what you’re trying to tell them. For you, life is a question of balance which, in order to be maintained, requires a number of things such as justice. If you know you are right, then, you are willing to go back to the topic several times, expressing your opinion each time and showing how this does not change even after years. If not, however, you also know how to admit the mistake, aware that what matters is that in the end the reality of things emerges.

Scorpio – The tough girl to defeat
In life you tend to take everything personally, so even a contradicted opinion of yours can become a reason for conflict. For this reason, you tend to insist a lot to make your opinion understood and to make others understand it by realizing that you are wrong. And if you don’t feel understood, you’re also willing to raise your voice or rage by hitting the weak points of those in front of you. Fighting in a verbal confrontation is therefore really difficult for those in front of you, which is why those who know you will always avoid being in opposition with you.

Sagittarius – The free spirit
Let’s put it this way, you really care little about being right in the eyes of others. This is because you have a high opinion of yourself and prefer to follow the way of thinking that those who love you will follow you and never the other way around. If you have someone in front of you that you think is open-minded, you are therefore more than willing to start a discussion, even if it is heated, but who you already know is stimulating. If not, you prefer to just smile with superiority, letting others think what they want and go their own way. One that will surely be a far cry from yours.

Capricorn – The one who always tries to explain himself to convince others
Being right is really important to you. For this reason, even in front of those who show that they are not of your opinion, you continue to explain yourself, sometimes in such an insistent way as to be heavy. The truth is that you often need the approval of others to feel that the reason is really on your side and when it doesn’t, you find yourself confused and unsure of how to move. A little more mental resilience could help you hold your ground, learning to accept that sometimes the reason can even lie on both sides.

Aquarius – The one who prefers to let it go
In the face of discussions that threaten to become too difficult your tendency is to leave the field, letting others think what they want. This choice depends in part on your desire not to have problems and on the other hand because you do not have particular interest in what others think of you. Of course, in the face of really important situations, you are ready to assert your opinions. For everything else, however, what matters most to you is to live quietly and leave skirmishes to others for their own sake.

Pisces – The one who fights with all his soul only if he really cares
For you to assert your reasons is very important but only if it involves people you care about. If on the other hand there is someone you consider unimportant, you are also willing to let it go. Your struggles, therefore, largely depend on the situation you are in. That said, when you choose to fight you do it with an animosity that hardly gets the better of it. Of course, maybe you are not one of those who win in the first fight but your motivations and the energy lavished in giving them, can only remain etched in others, even leading them to review their positions.