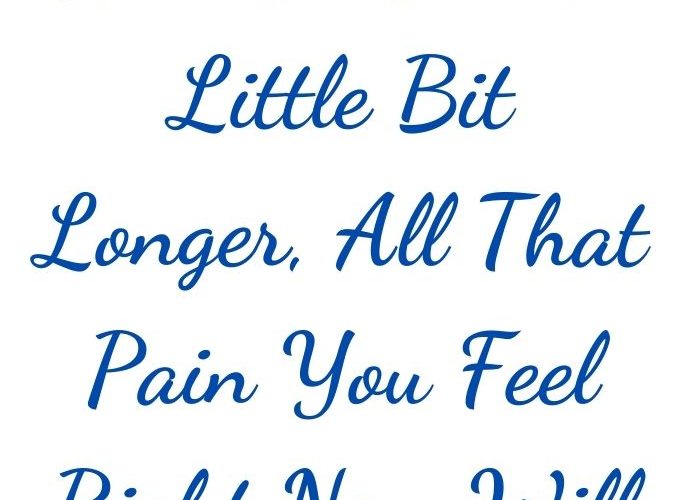 Hold On Just A Little Bit Longer, All That Pain You Feel Right Now Will Soon Be Gone

First of all, I need you to do me a favor. Go to the nearest mirror in your home and tell me honestly, what do you see?

Well, if you see a deeply hurt and broken-hearted woman who doesn’t have the strength to carry on anymore, you aren’t even aware of how wrong you actually are.

People disappoint you. The ones you love the most hurt you. But that’s just how things really are and you can do absolutely nothing about it.

Life is tough but you must be even tougher. Look at it as a huge fight with many, many rounds.

You must fight back no matter what happens. You know why? Because you are strong enough to keep getting up no matter how many times life throws you down.

Don’t give up after just a few rounds.

You’re so much better than that. Just because someone won a little battle, don’t allow them to win the entire fight.

You made a decision to trust that man and give him your heart. And he did have your heart in the palm of his hands and then he made a choice to throw it away and step on it until it broke completely.

Everything happens for a reason and that’s why you mustn’t look at it as your mistake. It was God’s choice, too. He sent you that lesson only to make you smarter and even stronger than you already were.

You can cry for many more nights and shut yourself off from the world but unfortunately, that wouldn’t change a thing.

That’s not the way you’ll heal your heart.

Your wounds will still be there and they might hurt even more.

You let one wrong person inside your heart but that mustn’t make you close the door of your heart forever.

One day, the right one will come knocking on that door and you’ll have to let him in. You’ll see all the light and happiness he’ll carry into your damaged heart.

Leave them right where they are and embrace every single one of them. Wear all those scars proudly because they’re the only witnesses of everything you went through.

They’ll be your little reminders to tell you when it’s time to hit the brakes every time you fall in love with someone and they don’t reciprocate your feelings in the same way.

Hold on just a little bit longer, please. I know it’s really stormy right now but I promise you, it won’t rain forever. It can’t and it won’t.

And if you’re feeling lost…

… if you don’t know how to move on or what to do next, don’t worry. We all feel like that sometimes.

Trust me, but really trust me on this, there is a way out. And soon, very soon, you’ll find the right direction and be able to rise above it all.

Things will get better.

You’ll know your heart is still pure, unlike the heart of the person who hurt you, and it’ll be your greatest victory.

Now again, please do me the same favor. Take a deep breath and go to the mirror again and tell me, what do you see now?