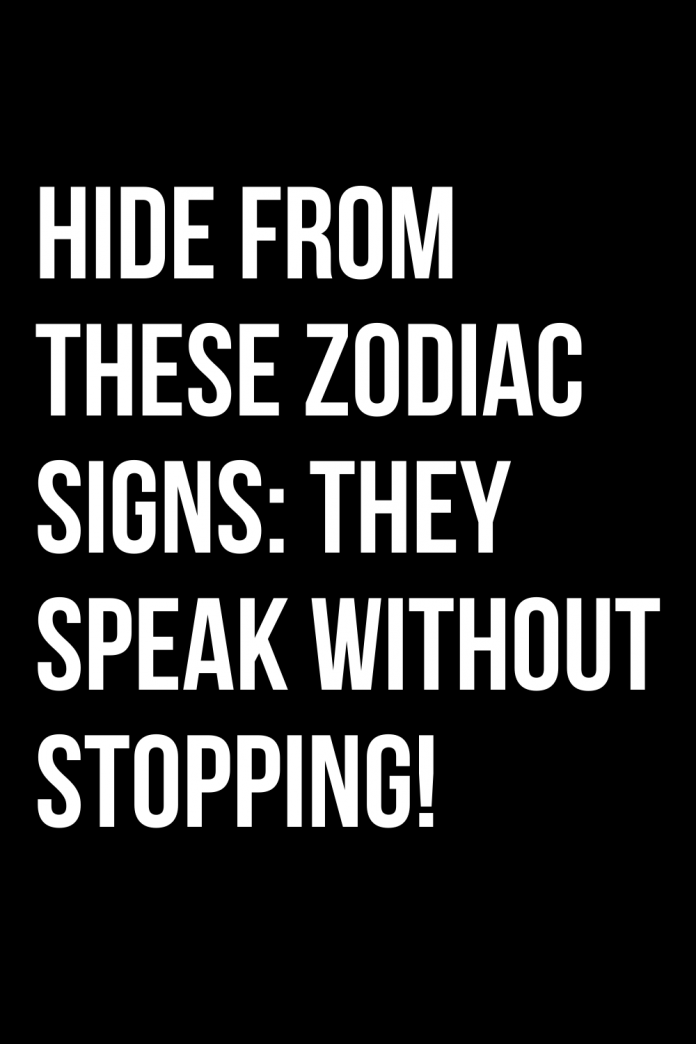 Yes, today’s horoscope ranking will reveal what all the zodiac signs are that talk a lot (er, maybe too much).

We all know someone who can make our ears fall to the ground by dint of chatter and anecdotes, right? Well, if you don’t know someone like this we have news for you (although you probably already expect it): you are the talker! Today we asked the stars and planets to tell us which are those zodiac signs that just can’t stop talking. The reason? Simply being able to tell that friend of yours that he is never silent: “ Did you see? The horoscope also says that you should talk less! ”

The zodiac signs that talk a lot: find out if you are in today’s ranking too

How many times have you happened to get ” stuck ” in a conversation with a person who just couldn’t stop talking?
Of course, dealing with someone who can carry on a speech even alone can also be fun: you don’t have to think about a conversation topic!

On the other hand, however, there are people with whom it is truly impossible to talk, simply because they prevent you from saying even one word!
Today we decided to ask the stars and planets to reveal to us which are the most chatty signs of the zodiac to know who we have in front of us right away! Will you be on today’s leaderboard? Hey, no, stop talking… let’s read the top five positions together first!

That those born under the sign of Taurus are quite talkative is, of course, quite undoubted.
Taurus likes to talk and a lot too: the only reason we put them in fifth place in today’s ranking is that Taurus doesn’t like talking to anyone!

The Taurus, in fact, carefully choose their interlocutors and make the ears of only the people they love most to catch fire.
We also wish you never to make them angry: in that case, they just don’t speak! (Which is even worse).

Even those born under the sign of Sagittarius like to talk … so much that they would never stop!
Sagittarians seem to be tragically unable to realize that, at times, people listen to them completely exhausted: but how much do they talk?

Sagittarians are like this: especially when they are enthusiastic about something they may never stop talking about it, ending up driving everyone around them crazy!
Fortunately (for us and Sagittarius ), those born under this sign are not always like this: only when they are extremely above the clouds of happiness do they turn into talkers that are impossible to bear!

Even the Aquarius certainly do not do … talk behind when we talk about zodiac signs that talk a lot!
(And yes, the pun is intended and we even thought about it for a while before convincing ourselves to keep it).

Aquarius are people who talk a lot because they have a great desire to open up and communicate with others. They want to be present for others, to be a guide, a shoulder, and also… excellent interlocutors! For Aquarians, talking a lot is a way to make others understand that they are popular: in short, if an Aquarius talks a lot when you are there, you know they like you!

To those born under the sign of Cancer, we leave the only second place in today’s ranking of the zodiac.
But don’t despair dear Cancers, you were almost on top of equal merit with the zodiac sign that speaks most of all!

Cancers are people who love to talk to others and who, therefore, are very upset when they understand that others … really can’t stand it anymore!
Don’t worry too dear Cancerians; do you think that at least you are not in the ranking of the zodiac signs that judge others every second … or maybe yes?
Okay, this doesn’t interest us for now: we want to understand why Cancers are among the zodiac signs that talk a lot and why!

The reason is very simple: Cancer is a sign that thinks a lot, elaborates a lot, and, above all, has a lot to say and communicate. Talking is for them the clearest and most direct way to clear their minds and ideas: they do it for you and them!

Libra: first place in the ranking of the zodiac signs that talk too much

Dear Libra, you knew very well that you would be at the top of today’s ranking because you are real talkers!
For you speaking is something practically innate: you would even talk to a wall if you were given the chance!
(Not a bad talent, if you want to know ours, as well as those signs that always manage to be casual whatever they do ).

Libra is fundamentally a very sociable and social sign: this is why he talks a lot, it is as if he had trained all his life to do small talks!
Incredible but true, then, those born under the sign of Libra are also able to talk a lot and for a long time with people they hate to die.
Even more: those who are hated by a Libra hardly realize it immediately: they are so friendly with them!