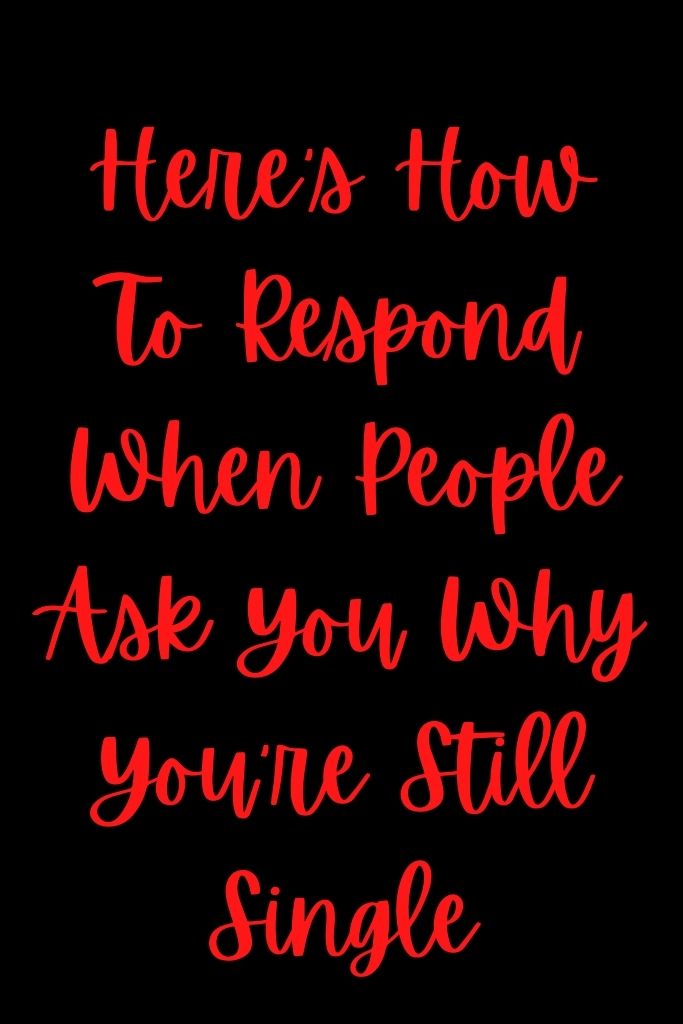 If you’re single, chances are people are looking at you with that distinctive facial expression that feels a bit like pity. You know, after they learned you’re single.

Some of them are even brave enough to ask why you’re still single, like it’s a casual question and not a deeply intimate one.

If you’re becoming slightly irritated with this kind of question, I’ve got you!

Here are some perfect responses I,  a single person who’s just trying to live a normal life and be happy on her own, came up with:

I’m perfectly happy on my own.

Simple and straight to the point. Apparently, lots of people think that a single woman can’t be happy.

I assume they think we’re desperate and dissatisfied but the truth is so far from that.

If you explain further that it is possible for a woman to be happy without a man and they don’t understand, that’s their problem, not yours.

I haven’t met anyone I wish to spend my life with.

In other words, you’re not the type to settle for just anyone. You and your ideal partner haven’t crossed paths just yet and maybe you never will, who knows?

What’s important is that you’re content with yourself and your decision.

This response should be pretty clear but still, for many people just being with someone is a sign of success.

What they don’t understand is that maybe you’re just an unconventional woman who doesn’t see herself in a conventional relationship.

Why do you ask? Is there something bad about being single?

Okay, this one might sound rude to some, but the question itself is rude.

Technically this is not an answer but a counter-question, however, it shifts the focus from you to them.

Hopefully, it will make them reconsider their decision to ask such questions.

A relationship is not my priority in life, I have other plans.

Another thing people assume is that everyone values a partnership, relationship, and marriage the same.

It’s a perfect opportunity to surprise them by saying you have different priorities in life – for your career, for example.

You’re an ambitious woman with different life values and there’s nothing wrong with that.

I have too much fun on my own.

Relationships can be great, but sometimes they’re nothing but a hassle and that’s a fact.

If you’re the type of person who’s never bored, you know what I’m talking about.

There are so many things to experience, so many ways to fill your time with meaningful activities, and it’s more than possible to do this on your own.

I love casual flings too much to give them up.

Not every woman dreams about the prince charming she’s going to spend her life with.

Some women are more laid-back and love to just have fun with no strings attached.

If you’re this kind of woman, you probably won’t be bothered by this question at all because you’re at peace with your decisions and know what you want in life.

Do you ask men the same question?

Call them out. Why do only women get asked this question while men get to enjoy being single?

This is not fair; in fact, it’s a misogynistic thing to say.

If they want to make you uncomfortable, why shouldn’t you do the same?

Your life and your relationships are a private matter and shouldn’t be anyone else’s business.

A woman’s value shouldn’t be measured through her relationship status.

You’re so much more than that and it’s time for people to realize.

Lastly, don’t let anyone tell you how you should live your life. Follow your intuition, your values, and your dreams.

Everything else will fall into place once you’re happy with your decisions – whatever they may be.