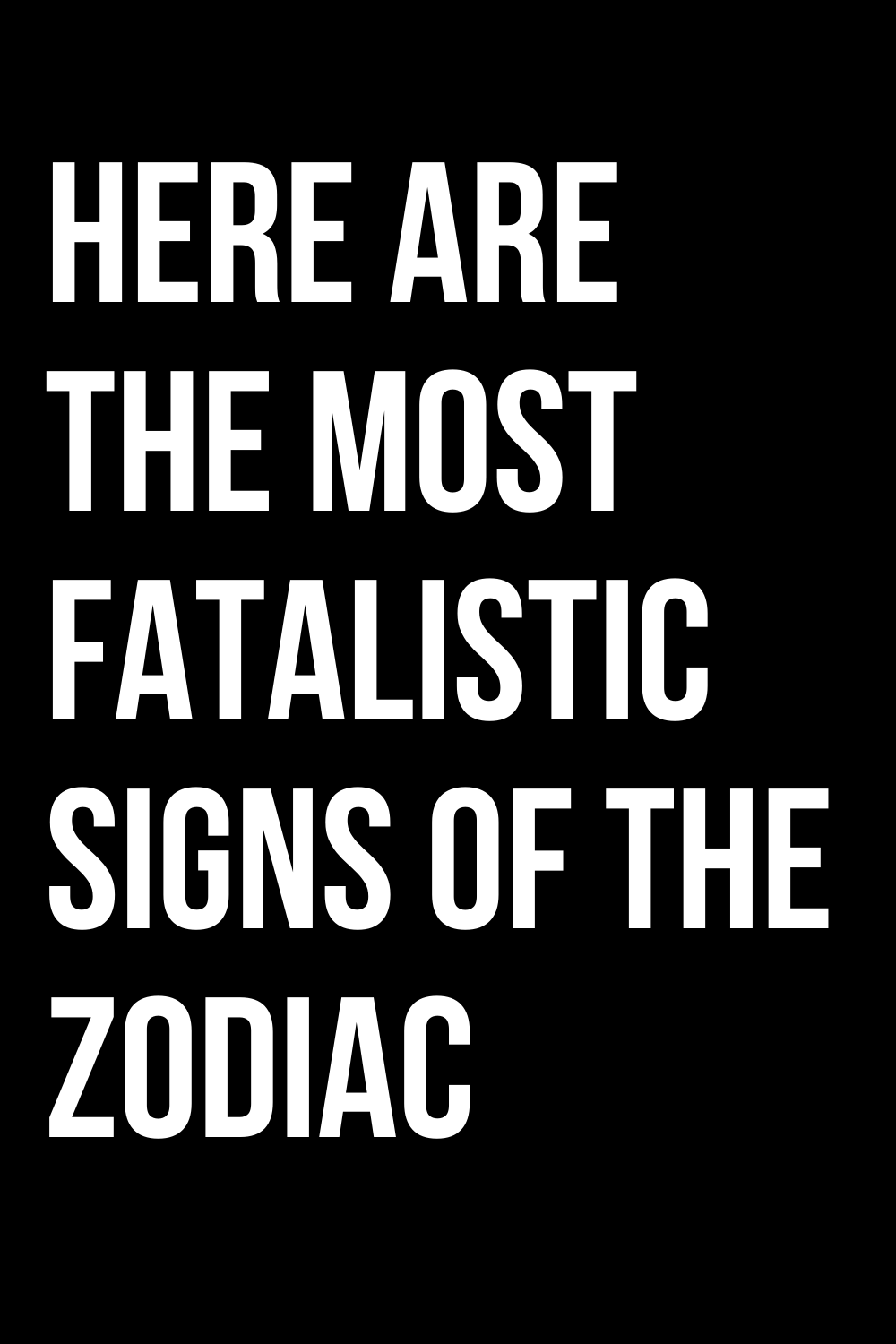 HERE ARE THE MOST FATALISTIC SIGNS OF THE ZODIAC

Find out which are the most fatalistic zodiac signs of all.

When we talk about fatalism, we mostly mean being led to accept what comes with resignation or taking it as a sign of destiny. It is a very personal way of approaching things and positivity or negativity depends on the degree to which you live the thing.
If on the one hand, some struggle every day by taking things with “fatalism” when there is no other way, on the other hand, there are those who, instead, end up immediately renouncing to take an active part in things and all just because resigned at the start. Whether or not you are fatalistic and how you are can depend on your character, on your experiences, and, at least in part, on the influence of the stars. Today, therefore, after seeing which are the most fragile zodiac signs and which are the ones they love the most, we will find out which are the most fatalistic and at what level they are.

Horoscope and fatalism. Here are the zodiac signs that are the most

Aries – almost nothing
For those born under the sign of Aries, being fatalistic is too abstract and far from their way of being. For them, every situation can be changed until the end and in their life, they commit themselves every day to change what they do not like and to achieve their goals. After all, being competitive people and with a constant need to emerge, relying on fate would mean having to say goodbye to their dreams of victory. One thing they could never do.

Taurus – Very Little
The natives of Taurus, although at first glance they may appear as submissive and ready to accept things as they are, are extremely confident in themselves and always ready to fight for the things they deem important. If they are faced with a challenge, they continue to fight until they believe they have made it and their way of doing it makes them completely different from fatalistic people. At the same time, however, before accepting a challenge, they tend to think about it with lots of pros and cons based on which they choose the battles that are worth fighting.

Gemini – Half Fatalistic
Gemini is people who often change moods and this leads them to have no real thought about fatalism. One day they feel ready to embark on an adventure and the next they prefer to follow the course of events to find out where it will lead them. When they choose the path of fatalism, however, they do it literally, relying 100% on the course of events and accepting everything that derives from them. Considering that when they are in the opposite mode, they throw themselves without thinking in any novelty, there being fatalistic, after all, can be considered average.

Cancer – Rather Fatalistic
Cancer natives don’t like to fight for things. Their way of leading them to always expect the lucky hand from fate and this sometimes, especially when their expectations are disappointed, leads them to despair. Nonetheless, they rarely decide to struggle against events. It is much easier for them to rely on luck while continuing to hope for the best. Even when they decide to make an effort, their struggles don’t last that long especially if they are convinced that they have an adverse fate.

Leo – fatalistic but positive
The natives of Leo are people who like to take everything they need without having to wait for fate to take care of it. Not at all fatalistic, however, they tend to embrace this modality when fate seems favorable to them. So, if they find themselves having to make a decision, they are likely to try to pick up some positive signs about it. A gesture that is more scenic than anything else since usually, when they do this, it is because they have already made their decisions. Having some confirmation from the universe, however, is something he particularly likes.

Virgo – negative fatalists
Virgo is rational a person, too much to rely on things like fate. When they let themselves be taken by negative thoughts, however, they even end up relying on what they think are the signs of an adverse fate and in doing so they end up believing in it to the point of depression. Fortunately, it is a situation that does not last long as it is too much in contrast with their constant rationality.

Libra – not very fatalistic
The natives of Libra are people who tend to bet everything on their strength, striving day after day to achieve the goals they have set themselves. For this reason, they rely very little on a fatalistic thought to which they prefer a mix of desire to do and hope. When they decide to let themselves go they do it mostly in the positive, relying on thoughts that can bring positive energy and a greater desire to do.

Scorpio – Fatalists in their way
Those born under the sign of Scorpio are people who love everything that has to do with the abstract. For this reason, they are not closed to fate but they live in a very personal way. Always ready to fight to achieve their goals, they tend to rely on fate mostly to grasp any “signs” useful to change their course or to provide them with some inspiration capable of guiding them more precisely on their path. Nevertheless, they always remain the absolute protagonists of their destiny.

Sagittarius – fatalists in their spare time
The natives of Sagittarius have a rather fluctuating attitude towards fatalism that at times seems almost confusing. While living with the awareness of wanting to achieve their goals alone, sometimes they succumb to the charm of a superior force that can guide them towards an already written destiny. This usually happens when they feel particularly tired or want to take a break from everyday life. After a few moments spent fantasizing, however, they always return to take back the reins of their life, I decided more to be the only ones to be able to guide it.

Capricorn – fatalists in free time
Those born under the sign of Capricorn love to take care of 100% of everything that concerns them. Not at all dedicated to delegating, they follow the same way of thinking even when it comes to fatalism. The only occasions in which they can rely on fate are therefore those related to free time. Moments in which they choose to be fatalistic more to try something new than for a real conviction. Never, never, however, would they rely on fate for business or personal matters. Their need to control everything is too strong to leave room for third parties or higher forces.

Aquarius – The non-fatalists
The natives of Aquarius are people who live a little for the day and who tend not to worry much about what is happening around them. For this reason, they do not feel the need to be fatalistic or not. For them, each situation requires different actions that they tend to implement without thinking about it or worrying about what it will be. From this point of view, perhaps, they could be considered fatalists. Yet their way of acting is driven by anything but a need to rely on destiny. What matters to him is to have concrete results and to live freely without having to give explanations to someone.

Pisces – Fatalists in a romantic way
Pisces are romantic people, with a very particular vision of life for which they sometimes also rely on fatalism. However, it is a way of doing things dictated by romantic thought according to which some things are the fruit of destiny. For the rest, when it comes to making important decisions, they show that they have a very analytical way of evaluating things and that they are more practical than you might think at first glance. In short, they know well how to keep romantic fatalism separate from what personally involves them and which, as such, requires important decisions.