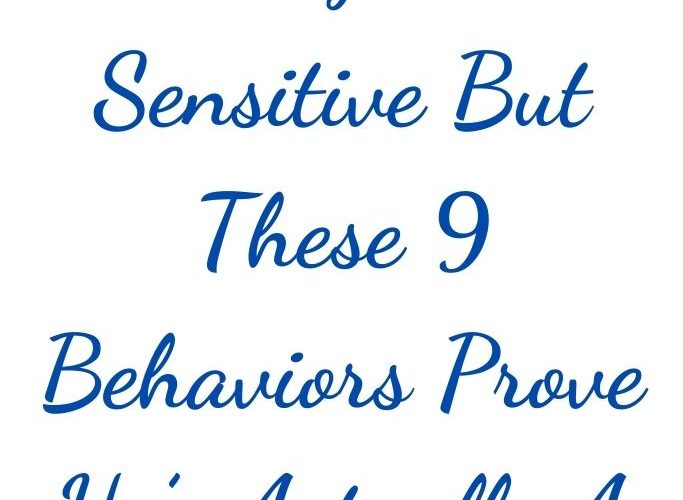 You’re so happy to have finally found a guy who’s emotional and isn’t afraid to open up about his emotions. Still, something feels weird.

You’re blaming yourself for not being able to deal with his emotions, thinking you’re just not used to having a sensitive boyfriend.

If you can sense that there’s something wrong, there’s a chance he’s a manipulator who pretends to be sensitive as a part of his con.

Check out these signs of a manipulator in disguise.

It appears to the untrained eye that he actually made a compromise for the benefit of having a healthy relationship.

However, in reality, he uses every possible situation to make it look like he’s doing you favors.

For example, if you ask him to go out with you, he might say something like: “Well, I already had plans but I can cancel them for you.”

In fact, he didn’t even have plans but wanted to use the chance to make himself look good and flexible.

He seems to always offload his baggage on you

Of course, it’s okay for a guy to share his problems with you but a manipulator has a unique way of doing that. He finds a way to control you with his traumas or sad experiences from his past.

For example, he might have been cheated on and now he uses that to make you extra careful about how you interact with other men because he says that you talking to other guys triggers all the negative emotions he has from the past.

You often hear him say that he’s such a nice guy and that’s probably why everyone is always hurting him. He can make every situation look like he’s the one who got hurt, no matter what the real story is.

Everyone is out to get him and it’s always him who ends up being a victim in almost every possible scenario.

He’s sneaky with giving you advice that only serves him. He formulates his sentences so it seems like he truly cares but he’s actually trying to get you to do what he wants.

At first, you think that he must really care about you but it feels really weird and it’s like every time you listen to his advice, you’re left feeling empty and confused.

He pulls you into his moods

You’ve noticed that however he feels, you start feeling. Sure, you might be a true empath but you’ll notice that he intentionally tries to pull you down and isn’t satisfied until he succeeds.

He can’t stand you being happy if he’s sad and he wants you to feel responsible for his feelings as this gives him a way to blame you whenever something goes wrong.

He usually does what you want him to do and says all the right things. He’s a natural people pleaser but you can sense that there’s something fake about it.

You can see by paying attention to his facial expressions that he isn’t honest.

The things he does for you seem overdone and planned out too carefully and he rarely makes mistakes, especially at the beginning of the relationship.

When something seems too good to be true, it usually is.

You’re just about to go to a party which he knew about and he calls you to tell you he’s not feeling well and you have to go see him.

You will be glad to at first but with time, you’ll notice that this is a pattern. He does this on purpose to drag you away from having fun with other people and focus all your energy and time on him.

He tells you sad stories at ‘convenient’ times

He has many sob stories and he somehow manages to share them with you at the most convenient times.

This is a definite sign he’s manipulating you and you should dump him, no questions asked.

He cries all the time

A guy being brave enough to show his emotions is amazing but this guy cries all the time, especially when things aren’t going his way.

There’s a good chance that whenever you need to tell him something really important which he assumes will be uncomfortable, he suddenly gets super emotional and cries.

It’s like he can cry on command whenever it’s convenient for him.

If you have realized by reading this that your emotional boyfriend is actually a manipulator and you now feel disappointed or angry, we understand you.

Leaving that kind of guy will be tricky since that’s where his manipulation tactics will reach their highest level.

Stay strong and don’t let him trick you into staying with him. You now know better.