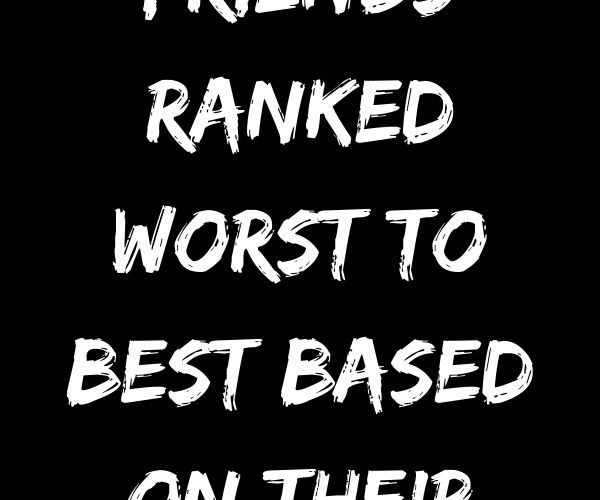 Friends Ranked Worst To Best Based On Their Zodiac

It’s really challenging to be friends with Virgo.

They have their fixed opinions, and they are short-tempered.

Their critical mindset makes them speak their mind, and things they say are not always nice to hear nor necessary.

They are perfectionists, and they want their friends to live up to their full potential.

Sometimes they come on too strong even though they mean no harm.

Virgos are loyal friends, but they don’t befriend many people.

They prefer quality over quantity.

It goes the other way around, too, because if you are a friend of a Virgo, you have to have thick skin and really get that their words have no evil intents.

The reason Capricorns are this high on the list and fall under the category of bad friends is that they prioritize relationships over friendships.

They will learn sooner or later that one shouldn’t exclude the other, but it might be too late for some friendships by then.

While they are single and fabulous, they are the people you will have the most fun with.

They always have some creative and crazy ideas about how to waste your time and enjoy it fully.

Aries and their explosive character won’t hesitate to give a piece of their mind to anyone who they believe deserves it.

At times they are too self-involved to pay attention to their friend’s feelings or needs.

They don’t do that intentionally. It’s just in their nature to put themselves first.

They tend to change interests often, and they change friends accordingly.

Due to their fun nature and broad interests, they make friends easily.

On the bright side, they value honesty more than anything, and if you fool them on, you won’t get the chance to do it again.

They are trustworthy, and they expect the same back.

They prefer to have fewer friends in number but greater realness.

It’s really hard to reason with your Taurean friend.

Once they have their minds set one way, it’s almost impossible to change its direction.

That’s why they always get into heated discussions with their friends.

Stubborn is their middle name.

On the up side, they will admit that they were wrong and apologize once their passions settle down.

They are also loyal friends, and they will never stab you in the back.

You can really depend on them—if they say they’ll do something, they will and there is no doubt about it.

If you are friends with a Gemini, you probably know by now that you got a two-for-one deal.

Their dual personality made sure of why they are the ones you will have the most fun with—but the most drama and craziness also.

They are extremely social and have a lot of friends, a whole sea of friends, and that’s exactly where they tend to lose themselves.

Instead of paying attention to real friends and letting them know they value them, they are all over the place trying to make time for everyone and make everyone happy.

Cancerians can be nitpicky; they are known to nag and be Mr./Ms. Know-it-alls at times, and that’s the worst they get.

They make up for this flaw with their caring and loving side which is much bigger.

They will shower you with hugs and cuddles.

They have a knack for knowing the right time to text when you need them.

They will do the impossible to lift you up when you are feeling down.

They have your back at all times.

Your friendship means a lot to them, and they will never betray you.

Aquarians are some of the most unique friends a person can have.

It doesn’t matter which way their friends are headed, Aquarians have their own paths to follow.

They don’t care much what other people think.

There are a bit of a loner, and they have different priorities than the rest.

They are intellectuals, and they will spend great amounts of time studying, working, and improving themselves.

But when it’s time to party, they party hard.

They usually have a lot of acquaintances they can have fun with, but there is just a small number of people they can really call friends.

At first glance, Pisces are great friends—until you stop and think how much you actually know about them.

While you are confiding in them and telling them everything about yourself, their true selves will remain hidden.

It’s almost impossible to pull them out of their shells until they have enough trust in your friendship to open up and let you in.

Once they overcome that obstacle, they are one of the best friends you will ever come across.

Their empathic nature makes them care for others and help them in any way they can.

It doesn’t matter if you’re friends with a Sag their whole life or for a few months—they pay attention to the quality of friendship and the length of your relationship is irrelevant in all of that.

They are adventurous, funny AF, and devoted friends.

They live outside the box, and they can’t be molded to fit anyone’s lifestyle.

That’s why they don’t have tolerance for people who want to change them.

They won’t tolerate unnecessary dramas and people who are negative.

They won’t sugarcoat anything, and they will give it to you straight no matter how painful their words might be.

The most interesting conversations will be the ones you have with your Scorpio friend.

Their topic range is broad, and it goes from the mysteries of life to something as trivial as dirty jokes.

‘Comfort zone’ is an unknown concept for Scorpio.

That’s why a friendship with them will push you out of yours.

They will make you cross your own limits and create fun and epic memories you wouldn’t have without them.

Scorpio would never lie to you.

What’s more, they are so brutally honest with their friends it hurts.

They will tell you what’s what whether you like to hear it or not.

Where there is party and adventure, there is Leo.

They love the spotlight, and having a good time with their friends is the most relaxing thing for them.

Leo is not a needy friend; you don’t have to talk every day to know they are there for you.

Actually Leo has no time for overbearing friendships because they are ambitious and therefore always busy.

But when they have the time, it will be easy to catch up about the good old days and pick up right where you left off the last time.

Leo is a friend for life.

Leo is also generous to a fault.

Where friends are concerned, there is nothing too much, and they tend to give a lot more than they are getting back.

It makes them happy to be able to make their friends happy.

Libras are most definitely ranked as the best of friends in the zodiac.

They are one of the kindest and most loving types of people you will ever come across.

Libra will do the impossible to make everyone around them happy and never expect anything in return.

Social is their middle name, and they have a large group of friends.

They always look for ways to make their friends feel good about themselves.

They see what makes other people special, and they want them to know that as well.

They never mean any harm and pay close attention not to hurt anyone in any way.

They like harmony and avoid fights. They never hold grudges and forgive quickly.

They behave the worst to themselves because their dictionary doesn’t contain the word “no”.

People take advantage of Libra’s kindness and good heart, and that’s something Libras have to struggle to change.