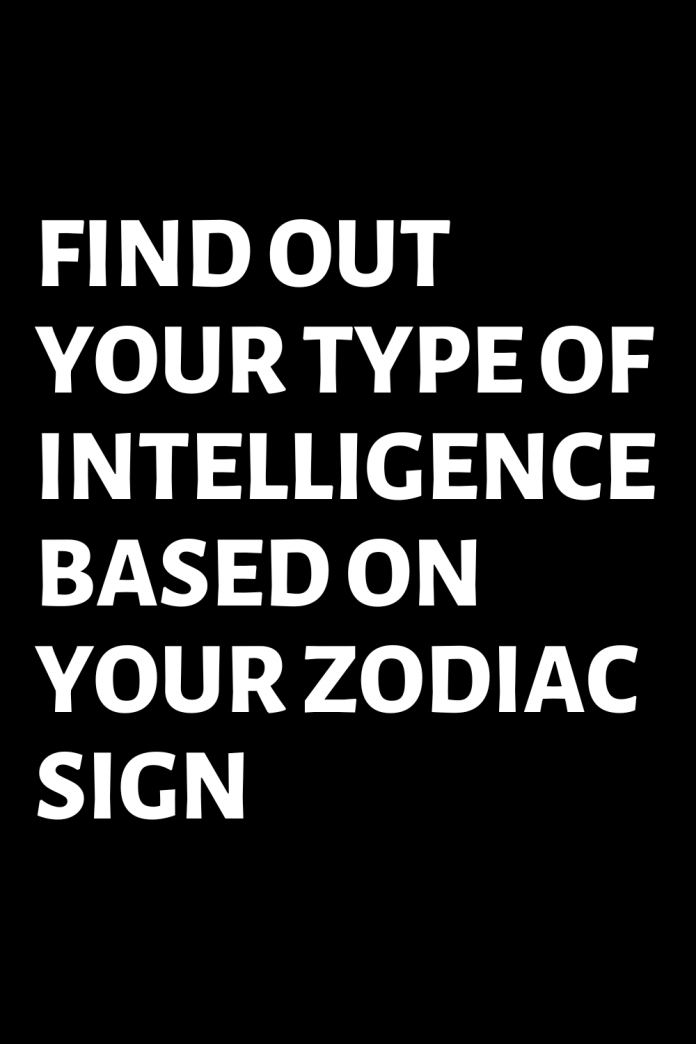 Each zodiac sign has a particular type of intelligence. Find out yours and that of the people you know.

Very often we tend to define a person as more or less intelligent without stopping to think about how many types of intelligence there are. Being witty or gifted for a given subject, in fact, are just two of the many facets of this character very often difficult to identify at first glance. Each person, in fact, contains within himself a form of intelligence more marked than others which at times can come out immediately and at others make us wait even for years. Today, we will explore the various types of intelligence that the zodiac signs carry thanks to the influence of Mercury, which is precisely the planet of intelligence.

Horoscope: A specific type of intelligence for each zodiac sign

Aries – Instinctive intelligence
Aries can be very intelligent as long as situations stimulate them to act by putting their wits in the way. Theirs is a form of immediate intelligence and particularly linked to instinct, so much so that it often pushes them to act without worrying too much about the possible consequences of their actions. Stubborn and eager to stand out from the crowd, they will only commit to a good chance of success. Each of their undertakings, as long as they are followed from the heart, will therefore be destined for success. Of course, everything would work even better if they also combined reason with instinct. In that case, success would be practically assured.

Taurus – The stubborn intelligence
Those born under the sign of Taurus have an intelligence that emerges better in the long term. Coming into the world to relax and enjoy every pleasure in life, Taurus always tend to avoid battles that others may have, preferring to rest on their laurels and indulge in some well-deserved rest. When they decide to get going, however, their stubbornness will take them far. Especially good at planning, they have an intelligence that combines strategy with resistance. Thus, in the case of epic feats, their contribution will always be the best one could wish for. At the same time, a better dialogue skills could prove useful in communicating any moves to be made and in carrying out their plan, whatever it is.

Gemini – The communicative intelligence
With their marked intelligence and able to range between different sectors, Gemini are born communicators, skilled both in solving any problems quickly and in illustrating strategies and methods of action. Talented for the communicative arts, they are good at analyzing what is around them, modeling it according to their taste. Their dialectic and the confidence they place in themselves also makes them excellent interlocutors, able to convince those who listen to them of their words. The only flaw is perhaps that of being too busy with themselves, which sometimes leads them to lose sight of priorities. Not to mention that if they also lent their intelligence to the community, the results would certainly be excellent.

Cancer – Emotional intelligence
With a sign dominated by the moon, the intelligence of those born under the sign of Cancer can only be nostalgic and particularly linked to memory. In need of constantly feeling part of something, Cancers tend to distance themselves from everything they feel distant from them and this also at the expense of any results. If in a bad mood, in fact, they are able to put aside their intelligence to indulge in useless grudges. Apart from that, they are excellent thinkers and are particularly gifted for art and history. Any subject capable of taking root in a historical past will still be perfect for them, always attached to the past.

Leo – Impulsive intelligence
Particularly intelligent, those born under this sign, who have always been led to command, prove to be very strong in grasping situations for what they are, immediately sensing their pros and cons. This way of doing things makes them better suited to their role as leader, a position for which it is essential to be able to see ahead, foreseeing at least a couple of moves if any will come true. The only flaw in this perfect gear is given precisely by the impulsiveness with which they often find themselves acting and which, instead, it would be better to set aside in order to come out as winners from every enterprise, calculating it in every smallest aspect.

Virgo – The rational intelligence
Those born under the sign of virgo are the most rational of the whole zodiac. Their type of intelligence, therefore, will also follow this way of being. Especially suited to calculus and science subjects, Virgos tend to weigh everything, analyzing the smallest aspects of a situation and deciding how to act only when the square is clearer than ever. At the same time, however, all this making calculations risks never making them feel truly ready for action, slowing them down and making them run the risk of missing the right moment in which to translate thoughts into action. A problem that a little more confidence in one’s abilities can easily solve.

Libra – Diplomatic intelligence
Those born under the sign of Libra boast a kind of calm and reassuring intelligence that develops at its best in the social sphere or in the face of situations in which it is essential to interact with other people. Born calculators, they always tend to weigh every decision on the basis of the possible positive and negative implications, correctly predicting the eventual outcome of each of their actions. The only problem, just like Virgos do, is that they struggle to fine-tune their ideas. Which, in the long run, risks making them lose credit, discouraging them.

Scorpio – Analytical intelligence
Scorpios are witty and brilliant and have a type of analytical intelligence that allows them to immediately understand the situations and people in front of them. For this reason, each of their actions, if preceded by a careful analysis, is destined for success, especially if assisted by the innate ability with which they are able to get in tune with others, capturing their desires and fears. The downside is that they may sometimes succumb to the temptation to manipulate others instead of moving along a perhaps longer but linear path. Fortunately, not everyone acts in this way and the mania for precision, as well as self-confidence, will lead them to not use their skills except in cases of extreme need.

Sagittarius – The superficial intelligence
With a very wide intelligence and reach towards different sectors, those born under the sign of Sagittarius, often tend to get lost, appearing to be somewhat superficial and distracted. Only if they are really motivated will they be able to give space to a careful analysis of the situation, thus being able to show their hidden talents. The fields in which they know how to concentrate best are those related to travel or teaching. The important thing for them, in fact, is always to be able to wander with the mind without feeling bound by invisible cages that would make them feel prisoners, leading them to lose any form of interest.

Capricorn – The intelligence of precision
Those born under the sign of Capricorn love to go to the bottom in any situation. For this reason, the kind of intelligence they excel at is the one that allows them to closely observe every problem. Equipped for teaching and for studies in general, they are very good at delving into every single topic, digging up to find every possible information and, where needed, the possible solution. It is just a pity that this ability, which is highly respected by those around them, is often severely tested by ambition, capable of ruining everything, making research more approximate and inferences to which they arrive less valid.

Aquarius – The open intelligence
Without any form of prejudice, the Aquarius have a boundless intelligence, able to lead them to make even great discoveries. Excellent as mediators, they know how to immediately hit the point of the situation, also grasping any implications and immediately understanding the right strategies according to which it is better to move. The only flaw is the difficulty in having a constructive comparison with other people, especially if they show that they think differently. Knowing how to listen and manage the opinions of others would instead be the missing key to some solutions that could prove to be brilliant.

Pisces – Intuitive intelligence
Those born under the sign of Pisces have an intuitive and very strong intelligence which, if managed correctly, can lead them to solve puzzles and problems of various kinds. Their instinct almost always helps them to grasp the most hidden aspects of every situation and the way people think and act. This contributes to making them not only interesting for their particular way of working but also particularly useful for those who need to discover something that with the sole use of reason seems to have no solutions. The important thing is never to combine instinct with impulsiveness. Knowing how to think about one’s impressions is in fact one of the winning cards of Pisces.