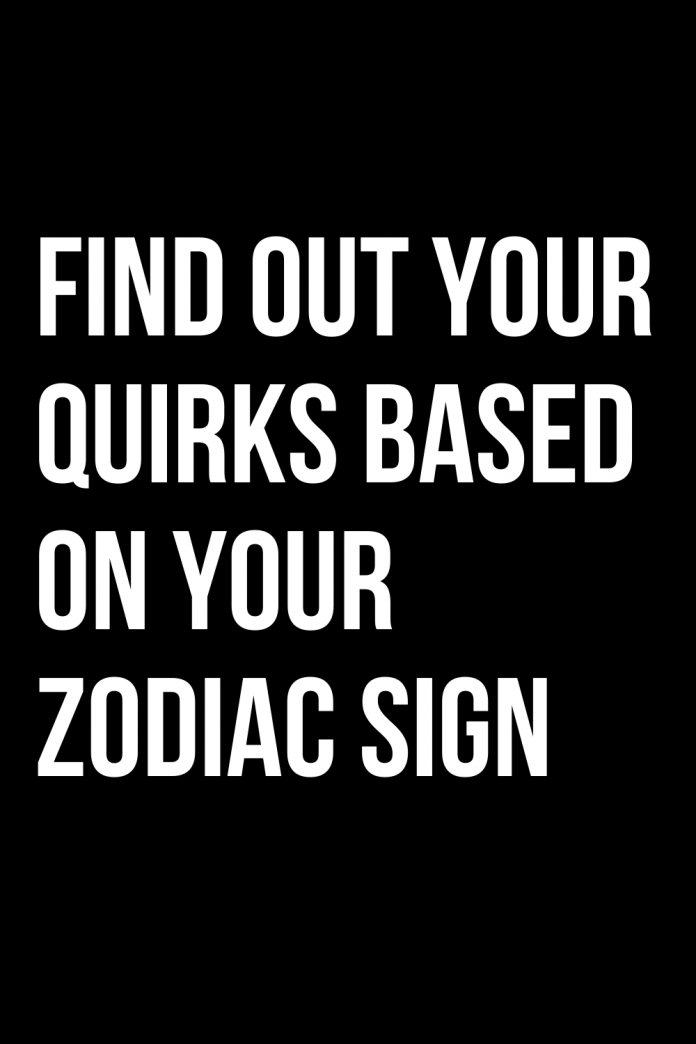 Find out your main quirks based on your zodiac sign.

Each of us is a little bit the sum of our own way of being and of as many ways of doing that mix together to give life to what others perceive, thus gaining an idea, albeit partial, of our personality. Between merits, defects, and character peculiarities, to define us in the eyes of others are often the manias , or those slightly extreme ways of doing which one cannot do without and which are usually among those that are noticed more than others . Today, therefore, after having seen how insecure we are in love and whether or not we are destined for success , we will try to understand which are the obsessions that stand out the most and which we cannot give up.

Aries – The one who always wants to know everything about everyone
One of the things that others perceive about you is the need to always know everything about those around you. This happens because you are always on the spot and are also very informed about the lives of others, thus giving the impression of occupying a large part of your day in the search for information. Among your delusions there are also that of always wanting to be right and to absolutely hate being contradicted. This is also combined with a sort of obsession with the hair that you always want to have on top and that you tend to touch yourself several times a day, a little to check that they are actually in order and a little because it relaxes you.

Taurus – The one who tends to keep everything
In reality you are not a serial conservative, much less one who tends to accumulate memories after memories. Yours is more a kind of propensity to know how to choose between the important things to keep aside and those that may come in handy over time. This, however, in the eyes of others, appears as a mania due mostly to the fact that you always show yourself in possession of what can be used, even if they are rather dated objects. Wanting to talk about real manias, however, we could talk about that little vice of constantly biting your lips or rubbing your hands together, in times of stress. Gestures that, however, not all natives of the sign put into practice and that are not always perceived by others.

Gemini – The one who never stands still
If you want to sum up your obsessions in one, we could talk about a tendency to never stand still. It happens often and willingly that during a conversation you end up shaking your legs, moving often, changing positions or simply making them tremble relentlessly. In the same way you denote a certain gesture that does not go unnoticed and which is joined, especially in times of stress, by biting your nails or fiddling with your fingers. All gestures that you hardly realize but are obviously noticed by others who end up considering them as delusions that you cannot give up.

Cancer – The one who always shows anxiety about something
Not that yours is really a mania, what comes to others, however, is the constant underlying anxiety that you express both with gestures and with words. If you want to talk about gestures, you often have the habit of constantly moving around, getting up and sitting down often, and walking around the room while talking. Attitudes that make you particular when you are good but that under stress you tend to extremes, making them the only thing that remains in mind in those who look at you.

Leo – The one who always wants to be the center of attention
Anyone who knows you and should find themselves describing you would say that you are a person who loves to live in the spotlight and who is not really made to stay in the shadows. And this is because this is what you show about yourself. Your way of carrying and speaking is in fact typical of those who want to get noticed and shine on everything and everyone. Even the way you tease others when they try to thwart you or make you feel less important than you would like, keeps the idea of ​​tea from changing.

Virgo – The one who always and in any case expects order
To want everything to always be in order is perhaps your greatest obsession and the same one that others perceive. Sometimes, in fact, a simple object out of place is enough to drive you crazy and make you nervous even for hours. Adding to this mania is that of always wanting to do things your way without ever being willing to listen or accept alternative ideas. In fact, changes are not part of your way of thinking about things, creating anxieties that you prefer to avoid.

Libra – The one obsessed with appearing
Your desire to always be in order and have a keen eye for detail makes others have the idea of ​​you as a person obsessed with exteriority. Not that this is wrong but it is certainly not the only thing that characterizes you. Those who know you well also know about your insecurities that often lead you to show yourself indecisive and unable to make absolute decisions, especially if these arise suddenly. For many, however, even these depend on your desire to always show yourself at the top and not wanting to upset anyone.

Scorpio – That too emotional
One thing that always comes about you is your emotionality that is expressed both in the way you carry and with the things you do or say. For you, everything must be lived with passion and for this reason you are unable to put your heart aside so much that, at times, it ends up having the better of reason as well. Therefore, a strong reaction to everything, both positive and negative, is always expected from you. Obviously, as a complex person you are, you have many delusions and many, not least that of always needing to know that others are sincere towards you and to always know the truth about everything that concerns you.

Sagittarius – The One Who Talks Too Much
Yes, sometimes others think you talk a little too much. Your cheerfulness and exuberance are qualities that you like and listening to you is never unpleasant. Sometimes, however, your tendency to not use filters can end up hurting someone and this even if you don’t even notice it. For this reason, being a person who talks too much is perhaps the thing about you that shines through the most.

Capricorn – The one who never changes his mind about things
If there is one thing that always comes to others it is your stubbornness, something that is seen as a real mania. Your always wanting to do things your way and never changing your mind, even after listening to interesting reasons, makes you seem like a person who is often withdrawn or too full of himself. And then there are those that are small but usual quirks that not everyone notices, such as twisting your hair in your fingers, often fixing the time and trying to keep up to date with what is happening.

Aquarius – The one who never gives a precise opinion
. A way of doing things so frequent that it is seen as a real mania? That of never knowing how to give a precise opinion, even when asked in a loud voice. Your desire not to upset anyone is often perceived in a negative way, especially when your opinion could make a difference. No less evident are other small fixes such as that of combing your hair often and caring a lot about your image, sometimes more for vanity than for other reasons.

Pisces – The one obsessed with the past
One of your obsessions is the one with the past. A sort of obsession, so great that it is now known even to those who know you. Often you almost seem to live with one foot in what has been and one in what is your reality, so much so that it is not difficult to find yourself with very old photos on your mobile phone or with a collection of diaries where you tell every important moment of your life. Wanting to go on smaller things, you often have to control how you look and be very careful about the health of the people you love.