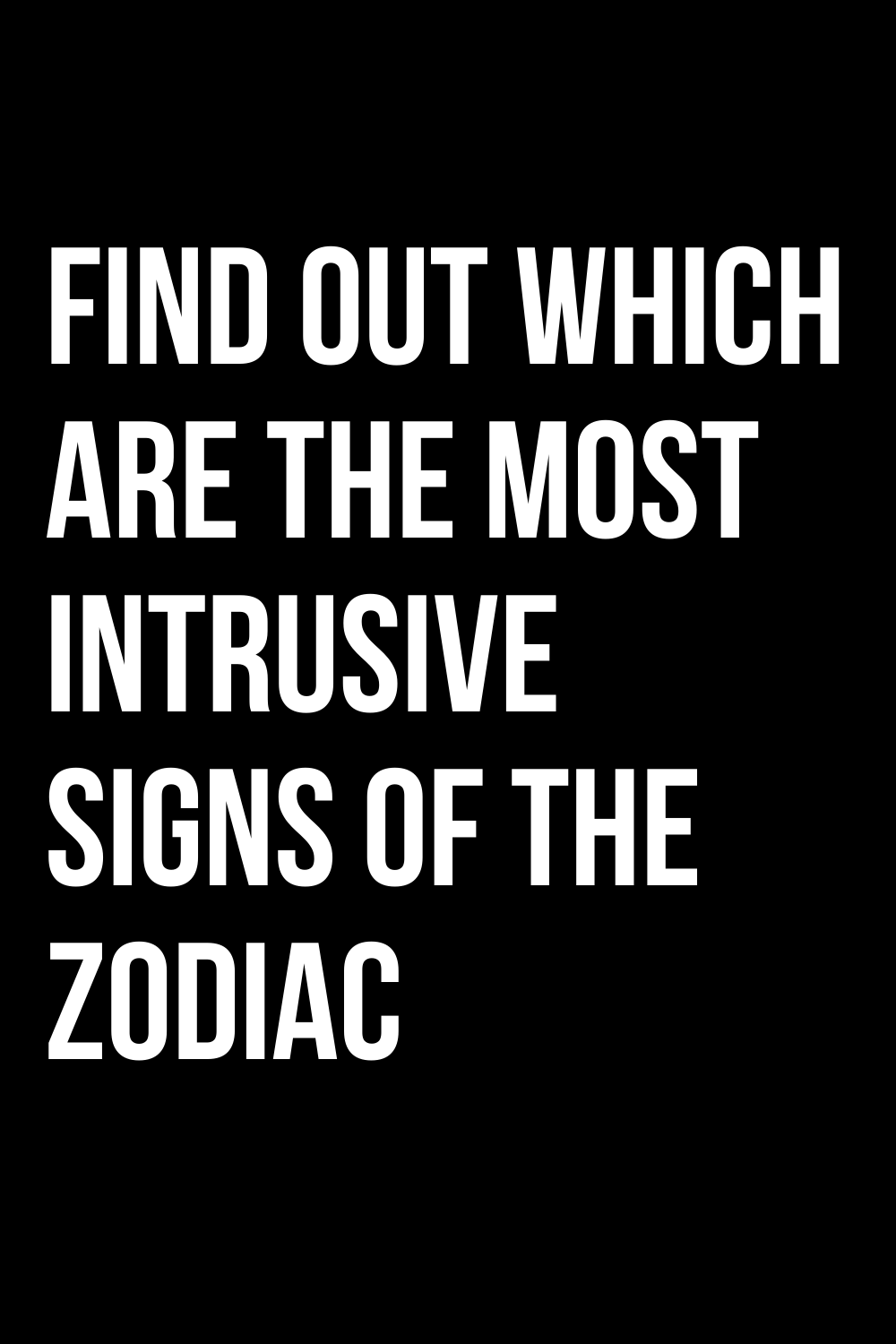 FIND OUT WHICH ARE THE MOST INTRUSIVE SIGNS OF THE ZODIAC

Do you want to know in advance if a person is at risk of being intrusive? Find out what the stars think about the various zodiac signs.

Have you ever had to deal with intrusive people ? These are the ones who are always trying to know how you are and who know how to fit into any context. Sometimes this way of doing it can be nice, in other cases, based on the ways of doing it can be heavy.
The way in which one is intrusive obviously varies from person to person and is in some ways influenced by the stars.
Today, therefore, after having seen if you are a good communicator and which signs of the zodiac are more reliable than others, we will delve into the theme of intrusiveness together, discovering which signs are more so than others and how they tend to be. Since this is a way of being, it may also be appropriate to check the profile corresponding to the ascendant, in order to have a clearer picture of the situation.

Intrusive people? Here are which signs of the zodiac are likely to be

Aries – Unobtrusive and based on the curiosity they feel
The natives of Aries are people generally taken by their own things and for this reason it is difficult for them to be intrusive. However, when they feel a particular curiosity towards others, they tend to get closer in order to discover as many details as possible. This, combined with a certain tendency towards gossip, can make them at times intrusive but in a very light way that usually does not cause annoyance to those who receive such attention.

Taurus – Almost not intrusive at all
Those born under the sign of Taurus are generally reserved people. This is why it is very difficult for them to be intrusive unless they feel particularly involved by people who usually fall into the emotional sphere or friendships. In this case, if they are apprehensive for some reason, they may come to show an interest that goes beyond the normal and that those who do not know them well can be mistaken for intrusiveness. In reality it is their personal way of letting people know that they are there and that they are willing to offer their help in case of need.

Gemini – Quite intrusive
Gemini loves gossip and anything that has to do with indiscretions, for this reason, especially when they are in a particularly good mood, they tend to “intrude” on other people’s matters. Theirs, however, is more a way of showing interest and most of the time it does not cause any problems to the recipients of their interest. For this reason, despite being temperamentally intrusive people, they end up doing it in a way so genuine and not constructed that they are almost welcomed with open arms.

Cancer – Intrusive in their own way
Cancer natives tend to live a lot on their own, which is why they don’t usually appear to be intrusive people. Nonetheless, they tend to be very present in the lives of people they consider important, to the point that they get angry when they realize they are unaware of something that has to do with their life. It could be said that they are intrusive in an indirect way, in the sense that even if they never actively interfere, they still manage to make their presence felt in a rather active way so as to make those who are at the center of their attention feel uncomfortable and, at times, are find not knowing how to handle them.

Leo – Intrusive only if it suits them
Since they are very self-centered people, those born under the sign of Leo are people who think more of themselves than of others. This changes if they feel that a certain aspect of others’ lives can somehow interfere with theirs. In this case they do not hesitate to get in the way with various questions or even going so far as to act themselves. An attitude that can obviously create discomfort in others leading to a closure that can generate conflicts that in the absence of adequate communication can even crack relationships.

Virgo – Rather Intrusive
Virgo natives are people of very curious disposition. For this reason they will always try to know what happens to others, both by asking questions and by listening when talking about them. This aspect, combined with the fact that they never hesitate to criticize what does not convince them, makes them rather intrusive, leading others to close for fear of feeling judged for no reason and, above all, without ever having asked for it.

Libra – Intrusive enough
The natives of Libra manage to maintain the right balance between intrusiveness and indifference. They therefore tend to ask questions only when needed or when it can show interest in others. An attitude that leads others to spontaneously open up to them, especially because they are not used to judge directly but always know how to dispense wise advice, putting others at ease and even giving them good food for thought. Theirs is therefore a form of positive and correctly managed intrusiveness.

Scorpio – Almost not at all intrusive
Since they are people who particularly care about their privacy, the natives of Scorpio have a lot of respect for the lives and spaces of others, this makes them non-intrusive people to the point of risking to seem little interested in the events of the others. In reality, theirs is just a way of respecting the privacy of others. If you want to share your life with them they will in fact be more than willing to do so and to reciprocate with sincere advice or opinions.

Sagittarius – A little pushy
Those born under the sign of Sagittarius are people who tend to do a lot of other people’s business. The fact that they are not always present due to their life made up of travel and commitments of all kinds, however, makes everything very light to the point of making them appear less intrusive than they really are. In fact, most of the time their asking questions seems to be a kind of way to update oneself on the lives of others. Which brings a certain openness in which he has to do with them and that rather than feeling investigated he perceives it as an interest in himself, almost welcoming it with pleasure.

Capricorn – Intrusive in a hidden way
The natives of Capricorn appear as unobtrusive people and very respectful of the spaces of others. In reality they are more attentive to others than it seems at first and this happens because they always do it with discretion. Their naturally inspiring trust by enticing others to talk to him about himself then does the rest, keeping them naturally updated on what concerns others and all without giving too much attention because basically, although they will never admit it they are quite curious.

Aquarius – Not at all intrusive
Those born under the sign of Aquarius are so taken up with their own things and so in need of their own space that they almost have no interest in those around them. Unless they are people they really care about, then, they are not intrusive at all. Indeed, sometimes a little more interest on their part would even please those around them and often feel almost invisible to their eyes. No fear though, theirs is not really an interest as much as a way of treating others as they themselves would like to be treated. Because you know, Aquarians hate the intrusiveness of others very much.

Pisces – Intrusive only if needed
Pisces are the most emphatic of all the signs of the zodiac. For this reason, it is very difficult for them to be intrusive unless it is necessary to help a loved one out of a dangerous situation or a really difficult time to deal with without the right information. Beyond these exceptions, they always show respect for the spaces of others and able to understand how far to go and, above all, when to stop with questions. All this, combined with their ability to give useful advice and words of comfort makes them appear as non-intrusive but excellent people to be around, especially when you need dispassionate advice.