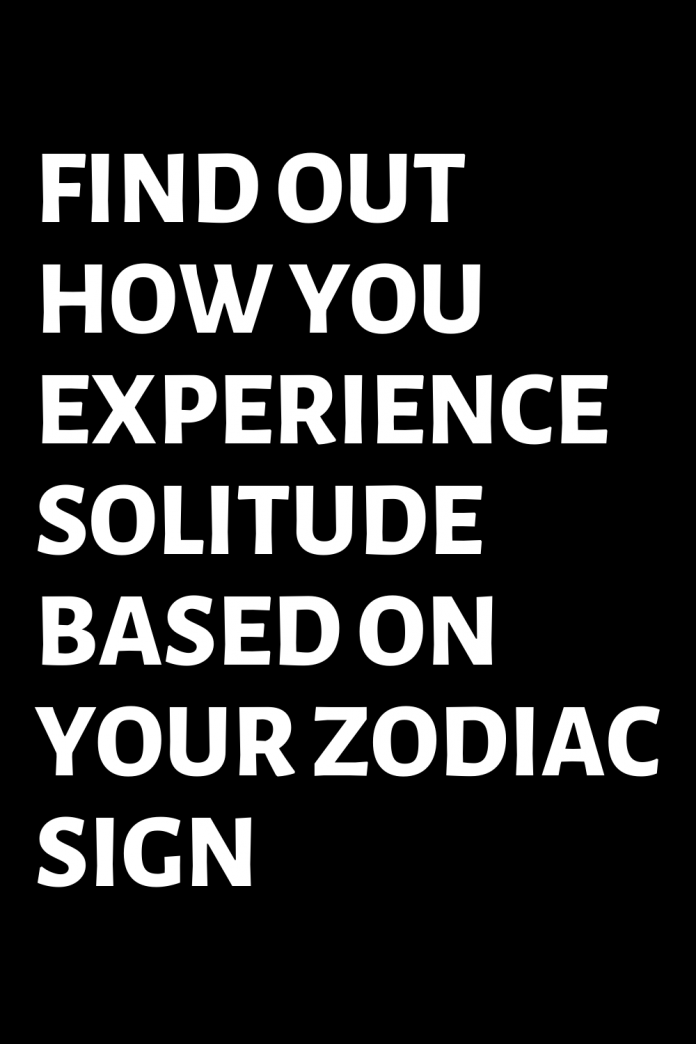 Each zodiac sign has a particular relationship with loneliness. Discover yours and that of those around you.

The word loneliness usually has a negative connotation, according to which those who experience it feel alone, sad and isolated. This particular state of mind, when not reiterated and caused by external factors, however, hides some positive aspects as it manages to put those who experience it in contact with their ego. It is no mystery, in fact, that the greatest ascetics live in solitude and that the same can be said of some monks of the most varied cultures who often find themselves retiring alone to meditate or reflect. Seen from this point of view , loneliness also has its usefulness and if lived in a healthy way it can elevate the spirit, even charging those who live it with new energy. In the hectic world we live in, for example, more and more people love to carve out their own space to reflect or simply be alone with themselves rediscovering their own company. Obviously, how you live this condition also depends a lot on the stars so that each zodiac sign has its own vision and way of living it. Today, we will therefore try to understand how each sign of the zodiac perceives and experiences loneliness.

Loneliness: this is how each zodiac sign lives it

Aries – In a negative way
Those born under the sign of Aries do not like loneliness very much, often perceiving only the negative side and ignoring how silence could make them closer to their emotions. For them, the ideal life takes place in crowded places or in the midst of many people. Being with friends is the thing they love most of all as well as being able to compare with others, always finding new ideas from which to draw.

Taurus – Well if in small doses
Even the natives of Taurus, just like the Aries, love to be in company. Unlike them, however, they know how to recognize the importance of loneliness, deliberately choosing to allow themselves a few moments when they feel they need to disconnect from the rest of the world. In these cases, just as if they were at a spiritual retreat, they love to take their time to get back in tune with their emotions and to get those inner responses that, due to the frenzy of everyday life, they often struggle to have.

Gemini – In an ambivalent way
Gemini is a rather ambivalent sign and this way of being is also reflected in the way of experiencing loneliness. Particularly linked to their emotions and incredibly bizarre, they tend to move from more introspective periods to others in which they wish to immerse themselves in social life, ignoring any thought or form of introspection. This makes them quite unpredictable people and whose reactions can vary a lot depending on the period in which they are. An aspect of which, after all, they do not care too much.

Cancer – As a comforting situation
Cancer natives aren’t exactly social animals. For them, life is more beautiful if spent in the peace of their own home and in close contact with the people they love and with whom they are in confidence. For this reason, they have an excellent relationship with loneliness. Often they are the first to look for it, feeling almost safe and sheltered from prying eyes and judgments. The only problem is whether this becomes more of an excuse to isolate oneself than to become more in tune with oneself.

Leo – As a necessary condition
Those born under the sign of Leo do not tend to aspire in particular to solitude. Nonetheless, however, they do not seem to disdain it. For them it is like one of the many duties to be lived without asking particular questions. Every now and then they deem it necessary to rearrange ideas or to develop new important strategies both in work and in everyday life. Beyond this, however, they much prefer the company where they are most comfortable and which they even consider important to their social and work activities.

Virgo – As Something Positive
Shy and somewhat insecure Virgo natives tend to have a good relationship with loneliness which for them is a good way to spend time. I stay on outings with friends, unless they are trusted, they experience the moment in which they can be alone as a sort of recharge, to be allowed as often as possible both to tidy up ideas and to relax, away from looks indiscreet and by the judgments of the people who usually do not tolerate.

Libra – With melancholy
For those born under the sign of Libra, loneliness often rhymes with melancholy. For them, being alone is like a kind of punishment to which they even tend to self-relegate if they deem it necessary. Lovers of beauty have towards this state of mind a sort of poetic and poignant vision that ends up making them sad every time they are forced to experience it. Much better to be able to be in the company, even of one person at a time, in order to feel sheltered from the silence, which too often they do not know how to deal with.

Scorpio – As a trusted companion
Scorpios have a very special relationship with loneliness. They do not love it excessively but at the same time they seem to seek it, especially when the alternative is to surround themselves with people who are not of interest to them. For them, in fact, quality comes first in life and rather than wasting time risking getting bored, they prefer to spend it alone, in the privacy of their home and surrounded by the things they love. Being alone also makes them particularly introspective, helping them to get in touch with themselves and their emotions more.

Sagittarius – Depending on the situation
The natives of Sagittarius see in solitude the possibility of simply being themselves. While they love being in company, they have moments in which they prefer to be alone with themselves. When they travel, for example, unless they are accompanied by people with whom they feel particularly in tune, they prefer to go alone, thus being able to rely exclusively on their own feelings and without having to comply with the wishes of others. The relationship they have with loneliness is therefore extremely variable and linked to various situations.

Capricorn – Like a refill
Capricorns are very fond of friendships, which is why being in company makes them particularly happy. Likewise, they often feel the need to isolate themselves at least for a while, in order to recharge their batteries in the silence that is like a source of energy for them. Human contact, in fact, while pleasing them, often ends up tiring them, almost forcing them to seek refuge in moments to be dedicated only to themselves. Moments of life that they usually use to reflect or simply to abstract the mind, reading a book or listening to good music.

Aquarius – As a pleasure
Those born under the sign of Aquarius experience solitude with joy. He likes being with others but it is like a pastime to be dosed in the correct way. The rest of the time, what reassures them most is being able to spend time alone, relaxing or indulging in long introspections which for them are a pleasant activity, able to relax them and put them at peace with the world.

Pisces – As an energizing source
Pisces are very attached to loneliness which for them represents almost a source of energy from which to draw whenever they feel tired. Being alone reading or watching TV is something that relaxes them as is being able to meditate or think about yourself for a while. As much as they love to be in company, in fact, their being very empathic often ends up tiring them, making them want moments of solitude in which not having to think about anything and being able to rely only on their own energies. A very positive approach as long as it does not become an excuse to escape others or situations that are considered uncomfortable.